They Want You Dead

Bow to the State or die.

If there is one thing about conservatives that is far and away the most grating, it is their refusal to understand, come to terms with or believe the truth about the Left. The truth is, they want you dead. Period.

They may let you slide — for a while — as long as you keep your mouth shut, but opening it is a sure ticket to extinction. Now, you won't be facing the gallows immediately; it will come gradually at first. And as evidence, we already see that. Various people lose their jobs, have their social media accounts de-platformed, get doxxed, have their yard signs ripped down and a host of other things.

Then — on a larger scale — we face the riots, threats from politicians, being described as deplorable and so forth. Corporate America has completely bought into the Left's narrative, and it's not just because of business concerns. Many corporate chieftains and captains of commerce in board rooms all over America actually agree with the Left's narrative.

Little by little (and sometimes a lot by a lot), conservatives are being relegated to the proverbial ghetto, marginalized and demonized. And in some ways, this is their own fault. There's something weird in the DNA of many conservatives — and this certainly includes orthodox Catholics — where they simply refuse to recognize danger and admit the full reality of what is happening.

It's hard to nail down. Is it an unwillingness to come to terms with evil — as in it's hard for them to understand that someone else can really be that evil — and since they can't conceive of it themselves, they think it can't be true? That is supremely naïve.

Or is it that they just don't want to face reality because they are unwilling to leave their little comfortable life on Maple Drive out in the suburbs and to stop going to Mass at St. Suburbia with Fr. Gay? Are they simply scared?

The Left — Marxists at the end of the day — want you gone, erased from history, as surely as those statues they are constantly tearing down.

Or is there an inherent wimp-factor in conservatives? Are they are so "reserved" that they just don't want to look at the big picture and see how all the dots connect? Again, bad call.

The political and theological Left are terrorists, straight-up terrorists. And if you offer one peep of resistance to their identity politics or identity religion, they want you rubbed out. You are sitting across the table from people who want you dead.

Why? Because for them, all this insanity is their identity. It's personal. You holding a different view from them about their homosexuality, for example (or whatever), they internalize as a condemnation of them as people. They have exploited the victim label so well, they have actually come to believe it.

These types of people do not believe in God or the afterlife. All situations — in their minds — must be settled here on earth, because there is no next life. So they get passionate, serious and even vicious.

Conservatives, on the other hand, adopt an inexcusable stance of, "Well, it's okay, God will take care of it all. Sure it's bad, but hey, there's always Heaven." That is a coward's cop-out.

And, as a marker, they sure wouldn't be satisfied if someone broke into their house threatening their children at gunpoint and somehow they managed to call 911 and heard from the dispatcher, "We'll be out eventually, maybe, but it's okay — God will smooth it all out in the end. Good luck."

That attitude fosters an extremely uncharitable approach of indifference. After all, if God is going to take care of it (eventually), then there is nothing to really worry about, right? It's unfathomable that any believing Catholic could look at the corruption in the hierarchy and not have his blood boiling.

Yet, millions still go on about life as though none of this is that big of a deal. Sure, it's saddening, but as soon as the headlines have passed in a day or two, it's back to life as normal. These corrupt bishops have far greater regard for your wallet than they do your soul. And yet too many Catholics either don't understand that or remain unmoved by it.

And then there are the ones who fall back on piety, somehow thinking to ever say a word about a cleric is horrible. Was it horrible for the Boston Globe to expose the raping of altar boys and the subsequent cover-up by the dozens and dozens of members of the U.S. hierarchy?

Conservatives, on the other hand, adopt an inexcusable stance of, 'Well, it's okay, God will take care of it all. Sure it's bad, but hey, there's always Heaven.'

In times past, when the Church was in need of great reform, it was accomplished by people who realized that reform was needed and then set about to reform Her. They got down into the trenches and slugged it out. Yes, they prayed and strove to increase in sanctity. That was the fuel for their efforts. But they did the work.

And oftentimes that meant calling out the crooked shepherds. But they did the work. They did not pretend it was something God would do and then absolve themselves — excuse themselves from the fight for justice. Yet this is precisely the approach so many political conservatives take, right along with self-described orthodox Catholics.

God will handle it, or someone else should do something. But when it comes to accepting the reality and rolling up your sleeves and getting in the game, nope. A Fox News poll last week revealed that 77% of Republicans believed the current political climate made it unsafe for them to express their views and beliefs: That's three out of four.

The country is in the peril it is now precisely because conservatives let it get to this. They've apparently not taken to heart that freedom and liberty must be fought for in every generation: They are not automatic, and neither are they guaranteed.

The Left — Marxists at the end of the day — want you gone, erased from history, as surely as those statues they are constantly tearing down. You will either bow to the gods of the State, or you will die. What a sad commentary, in the end — that all of this could have been prevented if only conservatives had not gotten so comfortable that they believed they could ignore reality.

But reality isn't like that. Either you deal with it or it will deal with you. That's true in politics and most especially true in the spiritual realm. 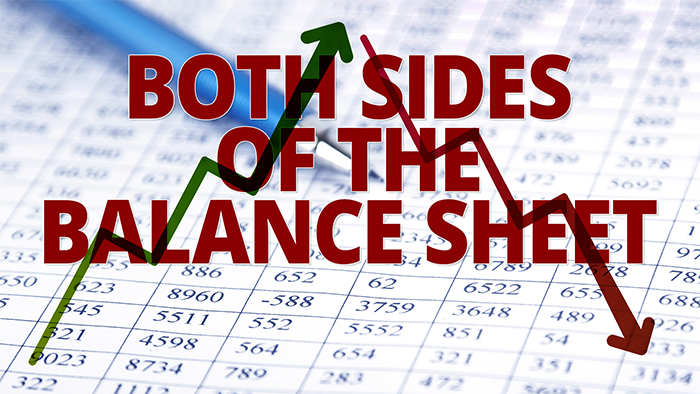 Both Sides of the Balance Sheet
How big are the losses?