They’re Coming for You

And they won't stop until one of us has won.

May 16, 2019  0
Podcast Available for Premium Subscribers

The Left is coming for you, giving a modern day context to the quote misattributed to Marxist Leon Trotsky, "You may not be interested in war, but war is interested in you."

Ah, yes, war is always interested in you — the war the Left has unleashed on Western civilization through the civilization's institutions.

And what exactly is the Left using the war to get of yours? Very simple: your soul. Only with the understanding of war — war for your soul, meaning spiritual warfare played out in the daily decisions of a society — does any of the current madness make sense.

Men pretending to themselves that they are women, competing in female sports and shattering records; corporations saying they will no longer accept the understanding of a so-called "binary world" where there are just two sexes; social media giants blowing up the accounts of virtually any person willing to challenge the lunacy of the Left — this is all being done to force a new world down everyone's throats. And don't think this isn’t coming, indeed, hasn't already started to come to a neighborhood near you.

Take, for example, the recent defeat of the Religious Freedom Law in Texas. That law would have protected business owners with publicly stated religious opinions from adverse government action.

The proposed law, House Bill 3172, got the nickname the "Chick-fil-A Bill" because when the fast food company wanted to open some more stores in San Antonio city airports, the city council refused to grant the necessary permits because of the business owners strongly held and stated opinions about homosexuality and same-sex marriage.

The bill was killed not on its merits, but by parliamentary lobbying tactics by the state's homosexual lobby group. There was a justified uproar about the case once it became wider known and Texas lawmakers said it was the perfect example of why the law was necessary so that governments could not penalize businesses because of their political or moral or religious views.

But that understanding of fairness only seems to apply to the Left — at least as far as the Left is concerned. Could you imagine the wailing and gnashing of teeth that would on the Left occur if the shoe was on the other foot?

And for the record, although you probably could already guess, the Texas Catholic Conference, the state's bishops, had nothing to say on the matter. Yep, the Catholic conference, in what seems like it should have been a "no-brainer" was completely dumb-struck on the issue of religious freedom.

The Left is relentless and shameless. And they will not stop until they have either converted you or eradicated you — and if not you, then your children.

These are not just political policy-type considerations or prudential societal decisions, these are, at their very core, spiritual matters which determine a person's eternal destiny.

In the end, it's all about spirituality, spiritual truth, meaning whether a soul is saved or damned. Yep, day by day, they are coming for you, and to date, your spiritual fathers have offered little by way of defense, and in frequent cases, they have sold you out, owing to their own perversions or willful neglect.

What Catholics need to come to terms with is that many of the bishops are actually supportive of the Democratic Party's worldview.

And since that worldview is diametrically opposed to Christ, well, now you see the disaster which has befallen the Church.

We need to all see and understand and tell our loved ones that the Left wants your children, and you, out of the picture. And given the current rate of success of the Left since this plan was rolled out, it would appear around just another five years or so until they have almost completely won.

Will everyday Catholics step up and save civilization? 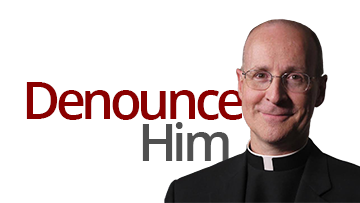 Denounce Him
Or die in your sin.