This Has Got to End

Even more information and details are coming in to Church Militant now about embattled Michael Hoeppner, bishop of Crookston, Minnesota, whom we featured in yesterday's Vortex.

Here is what Church Militant has now learned, as follow-up information from local Catholics who compiled a timeline with extensive detail regarding one specific priest that Bp. Hoeppner put back into ministry after he and his chancery knew about his psychosexual problems.

Their information to Church Militant continues: "Father Don made a pass at the husband, which caused concern with the couple, and prompted them to split ties with Fr. Don. This was reported initially to the bishop in 2011. Father Braukmann wrote an apology letter to the couple at that time and moved to St. Philip's Parish."

So follow along here: The priest confides all this to a couple, including the part about being intensely attracted to a teenage boy, as well as making a pass at the husband. Bishop Hoeppner is informed of all this and still reassigns Fr. Braukmann — apparently not seeing much wrong with the situation, meaning he determined that a man lusting after teenage boys (and telling parishioners about it) was perfectly fine being assigned to another parish.

And when he nestled in at St. Phillip's he started again. He got friendly with another family and, according to the written detail from our source:

Father Don had confided in them about his homosexuality. They described an incident where Fr. Don was overly affectionate and flirtatious with the boyfriend of their teenage daughter. The father of this family took Fr. Don aside and asked him to stop. The flirtation continued and they asked Fr. Don to leave because of his behavior.

As news got around, he was removed and sent to a counseling center for a number of months. During his stay, he admitted going to gay bookstores and having sex with men.

Upon leaving, Bp. Hoeppner was told by the facility that there was a high probability that Fr. Don would relapse into his former behavior.

So, armed with that information, Bp. Hopeppner decided to reinstate him as pastor of St. Phillip's, but complaints from his staff convinced him to make him parochial vicar — but he was still at the parish.

Hoeppner kept the threat to adolescent males secret from the pastor and the congregation. It was told only that he had an attraction to adult males, not teenage boys. Hoeppner deceived his own priests as well as the congregation.

Last month, Hoeppner had the gall to go to the parish at a meeting about Fr. Don and still deny and lie to parishioners, telling them there was never any concern about minors. But various parishioners and laity knew the truth.

This past weekend there was a showdown with the pastor, Fr. Charles Huck, and some of the parishioners.

Here is the relevant part of the testimony Church Militant has received about that meeting. It is extremely telling:

They urge Fr. Huck to admit the truth and get out in front of the deceit as soon as possible for the sake of the parish. Father Huck finally admits he was briefed [by chancery officials] ... about Fr. Don's attraction to adolescents and the complaints made against him. Father Huck stated the bishop did not disclose this information to him. Father Huck is still hesitant to tell the parish the truth, wanting to wait for Rome to decide about what they will do with Bp. Hoeppner. Father Huck was encouraged to tell the parish the truth because the conspiracy he and the bishop are engaging in to deceive the parishioners of St. Philip's is unraveling quickly.

This entire situation is filthy — the lying, the deceit, the cover-up on the part of Hoeppner.

Hoeppner was consecrated bishop by Abp. Harry Flynn, another prime player in the homosexual network of bishops established by Chicago Cdl. Joseph Bernadin.

Braukmann — who died this past summer, God rest his soul — was in seminary at Mundelein in the 1980s, yet another homosexual hotbed.

All of this is raising the serious question: Bishop Hoeppner, are you homosexual?

The question is: Why? Why would a bishop go to the mat for a priest who admitted he lusted after teenage boys and masturbated about it, reinstate him and involve other priests in a cover story that the priest only lusted after adult males?

Of course, the question needs to be asked: Is the bishop homosexual himself and just protecting his own? Is Hoeppner incapable of understanding the filth he is involved in?

Is the bishop's judgment on all this completely clouded because he himself is homosexual and doesn't really think any of this is that serious? That is absolutely a valid question — a question he must answer.

He reinstated Braukmann with every single person around him warning him not to do it. Then he lied about the number of people warning him, under oath in a deposition, saying his review board was split. Why does a bishop need a review board — whatever the final vote — to know he should not put an admitted homosexual lusting after teenage boys back into a parish? Why didn't the bishop simply tell Braukmann to apply for laicization?

Here's why: Because he and many other bishops went through seminary back in the gay days and are either gay themselves or embracing of it, and don't think there's really anything wrong with any of this.

That's the answer, and if it's not, Hoeppner needs to give a more plausible explanation, because right now, no other explanation suffices.

Hoeppner knew all this and didn't care.

Hoeppner knew all this and lied under oath.

Hoeppner involved some of his priests in lying in what became known as the "bishop's story."

Hoeppner — and every bishop in America who operates like him — needs to be removed.

Church Militant has reached out to Abp. Bernard Hebda, who is running the Vatican investigation into Hoeppner. We've asked three questions:

When we receive an answer, we'll let you know. Hoeppner needs to go, and it needs to happen immediately. He lied to the parish. He lied under oath to cover his actions of covering up for a priest lusting after teenage boys.

This has got to end. 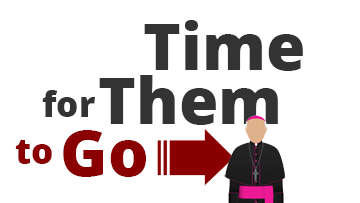 Time for Them to Go
And the empty seminaries are the proof.