As we get closer and closer to the midterm elections, the long knives are coming out on the Left, looking for any way to paint conservatives as nutjobs.

It's been going on for awhile already, with painting concerned parents as "domestic terrorists" for caring about their childrens' classroom instruction. Likewise, labeling anyone in Washington, D.C., on Jan. 6 as "insurrectionists" keeps the narrative of "crazy" going.

The only response the Left can muster in the face of things collapsing is, "You're crazy." That is why, in the past couple weeks, we've started to see attacks on religion starting to take center stage — specifically, focus pieces in The New York Times and The Washington Post zeroing in on the increasing involvement of Christians in the political process.

The "Jesus movement" is what The New York Times sneeringly labels it. But while insulting political conservatives over their economic policy preferences (and what could loosely be called "America first" worldview) is uncalled for, the label of crazy Christian might get some traction.

Why? Inevitably, when the leftist media strike out at Christianity, it's fundamentalism or conservative evangelicalism they are shining the spotlight on. The stories or articles always seem to revolve around the emotion-driven version of Protestantism and, truth be told, it is whacky.

Claims that Donald Trump is messianic or approaching some kind of savior status might be well intentioned, but they are poorly reasoned. And, at least partially, they find their roots in a faulty understanding of Sacred Scripture — something that has fueled the Protestant heresy since the revolution back in the 16th century.

Fundamentalists are convinced that Israel must be allied to the United States so that the Temple can be rebuilt and Christ can return. They incorrectly associate modern Israel with Old Testament Israel. They have absolutely nothing to do with each other — other than their geographical location. Likewise, the Temple does not need to be rebuilt in order for Christ to return.

Protestants, because of the heresy, have always gotten Scripture wrong overall and here too, again. What their notions about Israel and America's role in the world do is feed the Left's narrative that Christians really are crazy. Most journalists know nothing about religion because they are, almost to a man, atheist, gay or communist (or pick your poison).

So they look at the "Jesus movement" and think, incorrectly, that that is Christianity when, in reality, they couldn't be more wrong. That is, at best, flawed or incomplete or insufficient Christianity and, in some cases, not Christianity at all.

And, here, we are talking about Catholicism and Protestantism, not, repeat, not, individual Catholics (some of whom are rotten to the core) and individual Protestants (some of whom are wonderful, caring people). But the media delights in taking a caricature of Christianity and proposing it is the real deal and then, ascribing a high degree of insanity to it.

With that firmly in place, the media then go on to smear all conservative politicos as nutty because their followers are nutty. What's interesting in all this is that almost nowhere in the ongoing narrative are liberal Protestants brought into the picture. Tellingly, Catholics are also never brought up.

The reason, of course, is that all visible high-profile Catholics (most of whom don't know bupkes about the Faith) and liberal Protestants share what amounts to the same values as the media — or close enough. They wouldn't know morality, in most cases, if it smacked them in the face.

Fundamentalist Protestantism is crazy and can provide zero for defending the country.

The sad reality is that, when America was reshaping itself immediately in the aftermath of the Second World War, Catholics had a chance, a small window, to step into the forefront and lead the country to a place of righteousness. But the American hierarchy was, in many ways, already on the way to selling out — exchanging the Faith to become "Americans."

So when America changed for the worse, so too did the Church, whose leaders had previously thrown their lot in with prevailing culture. What would have been a somewhat-easy fight to save the nation has now become a fight to the death, and the odds don't look all that good.

Nevertheless, today's generation of faithful Catholics — what few young there are among them — must now stand up and be counted. As is usual when it is dark and there seems little hope left, if there is to be salvation, it always comes from the least-anticipated quarters.

Praise and worship nonsense, rightly mocked by the Left, will not provide the necessary refuge or intellectual firepower. It must be Catholic — with no exception.

The Left is unhinged. Fundamentalist Protestantism is crazy and can provide zero in terms of defending whatever actually remains of the country. For those counting themselves or styling themselves as America first, that's only true naturally. It's actually faith first, supernaturally.

Take care of the supernatural, and everything else falls into place. This is easily understandable, and the opposite is also true. Fail at the supernatural and your country falls apart. Faith comes first, and that means the Catholic Faith. 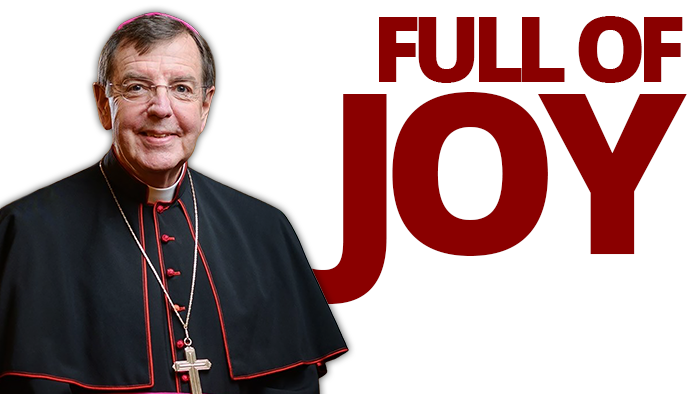 Full of Joy
Not really.