Oh my, but the Left is getting testy.

You've probably seen or at least heard about fake "Catholic" Joe Biden going off on a voter at a town hall last week. The voter had asked about the unethical situation of Biden's son Hunter profiting from his dad's role as U.S. vice president, as well as saying Biden is too old to be president.

The age comment seems to have bothered Biden as much as the charge that his son and he were corrupt. But there's an interesting thing playing out here on the political scene that is also mirrored within the Church: It's the clinging to power of the Old Guard.

On the political scene, much is now being written about, despite the fact that the Dems never shut their traps about diversity and the underprivileged and the downtrodden, that the only people who seem to have a realistic shot at the nomination are really old, white, male millionaires or billionaires.

Kamala Harris' dropping out and Elizabeth Warren's star fading had elevated the prominence of guys like Biden and New York Mayor billionaire Michael Bloomberg. At this point, no woman, no blacks — just rich, old, white men. So much for diversity. This is exactly what the Democratic Party looked like in the 1970s.

But as we said, this is mirrored in the Church as well, as old, curmudgeonly men with apparent access to unlimited funds — men stuck in a time warp of the 1970s — run the Church. Those old men don't like their power — their status quo — being threatened any more than their old, crusty political counterparts do.

And another similarity is the Catholic connection; of course, the men running the Church these days are baptized Catholics — not sure beyond that fact how Catholic they are, but at least they are baptized.

A disproportionate number of politicos destroying the country for the past 50 years are also Catholic — Joe Biden, of course, comes to mind. But so, too, does the queen bee of Catholic traitors, Nancy Pelosi — a disgusting fake "Catholic" whose baptism seems to have zero impact on her. But to hear her blather on, you'd think she was a model of sanctity.

The same day Biden went off, swearing at a voter, Nancy was showing her true colors as an attack dog. Having wrapped up her press conference, saying the House was going to perform its "solemn duty" and move forward with articles of impeachment against President Trump, reporter James Rosen of Sinclair asked Pelosi if she and the Dems were doing this because they just "hate" Trump.

Pelosi lost her mind on Rosen, who was simply asking a legitimate question, because the day before, GOP Congressman Doug Collins of Georgia had said the Dems were doing all this just because they don't like Trump.

The word "hate" was too much for old Nancy to bear. Pelosi instantly reverted back to her continual claim that she is Catholic — a position she takes time and time again to support her liberal, socialist, marxist policy positions.

For a woman who says she doesn't "hate" anybody, there does seem to be one group she hates — the unborn. Since Pelosi arrived on Capitol Hill in 1993, almost 25 million children have been slaughtered as a result of her party and their policies, and in particular, her specific votes.

Not exactly sure how she defines "hate," but it must be a very narrow definition to exclude 25 million victims of murder. But again, every time she talks about abortion, she appeals to her "Catholicism" as a defense of the slaughter. And yet, the U.S. bishops continue to let her claim she's a Catholic.

The issue at hand is really this: It's the challenge to the power of all these corrupt, aging folks in both D.C. and Rome.

A terrible, evil axis had developed between Rome and Washington, D.C. — an axis that has as its goal an entire re-ordering of the world. It's well funded and well organized. It's been in the planning stages for decades, and now, the architects of it like Pelosi, Biden, Pope Francis and his homosexual cabal in the Vatican are accelerating their plan before they die off. There's simply too much going on for any reasonable person not to understand what's going on.

The swamps in both cities are making their final push, confident they can usher in a whole new world order before they go to their graves. Their legacy (they hope and think) is a new world order, where abortion is supreme (or at least ignored), the United Nations is the final arbiter of all things, human population is greatly reduced and individual nations are swallowed up in a great cataclysm of open borders.

But as their plans become blindingly obvious, they are getting a severe pushback they probably didn't anticipate, at least not the severity. The blowback is coming from little people in the Church and the voting booth.

That Hillary — who said religious teachings would have to change — was defeated by the brash upstart Trump threw a severe wrench into their plans. His talk of draining the swamp resonated with tens of millions of U.S. voters and created panic in the halls of power in D.C.

But as the prospect of that became less and less likely, owing to tremendous economic growth across the board, the panic increased. So now a list of phony articles of impeachment is being drawn up to take some of the luster off Trump, so desperate are they to destroy him in 2020.

Over in Rome, while the principles at play are the same, the particulars are reversed.

The Pope and his gay cardinal and archbishop compatriots thought they were putting the final touches on their makeover of the Church, and suddenly, many of the same folks in the U.S. who understand the political dynamic began to recognize the same dynamic playing out in Rome — and they are revolting.

The powerful do not like their power being challenged, but that is exactly what is going on here in the U.S. and Rome. Their true colors are coming out, as revealed by the Pope telling reporters to check out an article written by his Jesuit pal Antonio Spadaro — who directly slammed Church Militant — and by the heated reactions of both Joe 3-0-3-3-0 and old, nasty Nancy.

But strap in; this is just a foretaste of what's to come. The old and getting-older former hippies of the 1970s both in Rome and D.C. will not go down without a fight.

Pray for the Church. Pray for America. 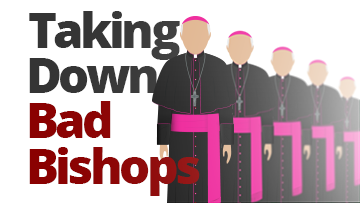 Taking Down Bad Bishops
Lots and lots of work to do.