And what has changed?

I'm Michael Voris, coming to you from Baltimore, where our Church Militant "Bishops: Enough Is Enough" rally (at the same location as in 2018) has been given the green light by a momentous ruling in federal court over the city of Baltimore, which was working secretly with the U.S. bishops to prevent it.

Back in 2018, things were a little more subdued with regard to the rally — the same rally that took place under the cloud of the Theodore McCarrick revelations. But three years on, subdued is hardly a fitting word. Back in 2018, the bishops lied once again, saying they would handle the scandals, which is a little difficult to do when you are the scandal.

You'll recall that the bishops' main megaphone in trying to cover it all up for the crooked hierarchy was Donald Wuerl, part of the filthy homosexual mafia that has a death grip on the Church (and has had for decades). Wuerl, speaking on behalf of the corrupt homomafia, said the most fantastical thing anyone could say in response to being caught red handed: Essentially, the bishops will investigate themselves.

If that isn't the most bald-faced assertion in the face of being caught, you'd be hard-pressed to come up with another. So, three years later, just how successful have the bishops been in "investigating themselves"? Based on the turnout of faithful Catholics from all over the country, here to pray for and protest the hierarchy's lies, theft, abuse and cover-up, you'd have to give the bishops, as a body, a failing grade.

It's a safe bet that as Strickland's stock rises with the laity, his capital is decreasing within the conference of bishops.

Of course, no one ever really believed there would ever be any meaningful investigation of themselves by themselves; it didn't even play well in Peoria, as they say. But here we are — three years later, with hundreds and hundreds of Catholics having arrived early, with a huge number taking part in yesterday's Men's March, demanding the bishops end the sacrilege of pro-abort politicians being given Holy Communion.

Father Stephen Imbarrato was one of the men leading the charge, pointing out the grave responsibility clergy have in this fight. Thankfully, at least Bp. Joseph Strickland — one out of the 300+ bishops assembled here — did add his prayers with the assembled throng in front of Planned Parenthood.

It's a safe bet that as Strickland's stock rises with the laity, his capital is decreasing within the conference of bishops. But as Church Militant and other faithful Catholics converge on Baltimore and outfits like us denounce the evil of all this sex abuse, cover-up and theft of billions from the faithful to pay attorneys to cover it all up, it would appear that Pope Francis is trying to piggyback off the new reality in the Church.

Yesterday, Francis issued a statement of gratitude to the media for exposing all the filth of sex abuse and so forth. But his statement left many scratching their heads, wondering if he is being genuine or if this is just another papal "bull."

Francis has been one of the leading forces actually promoting the homoheresy in the Church with his flood of appointments and promotions of multiple bishops and cardinals who are either abusers themselves or cover-up artists of it all. The dominance of homosexuality in the bishops' conference is the single subject the mitered class will avoid at all costs.

Here is a look at our weekly Church Militant cartoon, which illustrates the point perfectly: "So boys, what should we discuss this year?" says the great big pink elephant embracing the bishops' leadership. The rise of the farcical Biden administration has brought to the forefront the continuing issue of sacrilegious Holy Communion being given to pro-abort Catholic politicos.

So instead of facing the nonstop, constant issue of homosexuality in the clergy, they have another issue they are laboring over, which, for at least some of them, is a welcome relief from dealing with the whole gay thing. But even this, if you consider it a dodge, is really difficult to square.

What precisely about the Real Presence and the need to protect our Sacramental Christ do bishops need to slave over and labor over for days, to produce what will amount to an essentially worthless document that will completely sidestep the sacrilege question.

That you need to be in a state of grace and not a notorious public sinner obstinate in your sin is hardly anything new. Heck, St. Paul said it 2,000 years ago. So what's the problem? But more importantly, what is completely being missed by supposedly Catholic media is the direct line from this sacrilege to the sin of sodomy.

The corruption in the hierarchy in permitting so much sin surrounding sodomy directly results in the allowance of sacrilege. The Faith, across the board, is diluted by the acceptance of grave sin among the bishops, so of course belief in the source and summit of the Faith is diluted as well.

This generation of bishops was raised in the stench of the sexual revolution of the 1960s and 1970s.

Satan has attacked the sacred priesthood through the sin of sodomy, and since the chief role of the priesthood is to offer sacrifice, the sacrifice itself, the Real Presence, is degraded in the eyes of the priests and bishops. This generation of bishops was raised in the stench of the sexual revolution of the 1960s and 1970s, and they themselves have become spiritually depraved as a result.

Even for those bishops who do believe in the Real Presence, and it is clear not all of them do, there is a fear in defending it. They would rather face the wrath of God at their judgments than to offend the world in the present. The failure to speak out and defend Our Blessed Lord is directly a result of their blindness regarding the sins of the flesh.

All of which stands to reason after all — the Real Presence of Our Blessed Lord in the Eucharist means He is present in His flesh. So along comes Satan, blinding the hierarchy to the reality of Our Lord's flesh, with the sins of the flesh.

With Satan, it's always a substitute phony understanding of God, meant to deceive. But the new reality in the Church is this: Too many faithful are saying "enough is enough, bishops." Enough is enough. And this time, what's been seen can't be unseen. What's been heard can't be unheard. 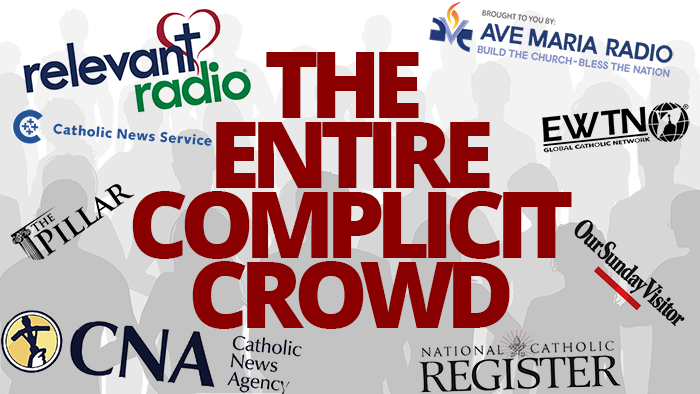 The Entire Complicit Crowd
The days of fake Catholic news are numbered.