Time for Them to Go

And the empty seminaries are the proof.

Before we begin, a brief programming note: Many of you have been asking us about when we are resuming live-streaming our morning prayer and Rosary at 8 a.m. and evening prayer at 4:45 p.m.

We are happy to announce that we have resumed live-streaming both as of yesterday. Please join us as frequently as you can — 8 a.m. and 4:45 p.m. ET Monday–Friday during normal workdays.

Now, hopefully, the forced early retirement of the lying, cheating Richard Malone as bishop of Buffalo will start the ball rolling. For weeks before — even months — laity quietly prayed and presented in front of the chancery that Malone be gone, that the time had long since passed for him to be gone, in fact.

That same situation is now developing in various other dioceses around the country because faithful laity have had it. They are done with the lies, the pomposity, the arrogance, the superiority of these feckless men.

One such diocese is Crookston, Minnesota, where Bp. Michael Hoeppner, you will recall, is the very first bishop on earth to run afoul of the pope's new rules calling for cover-up bishops to be investigated by another bishop appointed by the Holy See.

And why is Hoeppner being investigated? Because he covered up abuse, lied, threatened with extortion and played very fast and loose with the truth in a deposition from plaintiffs' attorneys.

He is on camera actually saying he doesn't see any real problem with keeping a priest in active ministry who — get this now — actually admits he has a pornography problem, masturbates to thoughts of children, travels out of town where his fantasies become worse and believed his problem was beyond his own control.

After reviewing psychiatrist notes showing all of this self-admitted behavior on the part of the priest, Hoeppner is pretty cavalier.

In another incident — one of many — Hoeppner answers in a way that is simply not credible and gets called out on it by plaintiffs' attorneys.

Consider for a moment, this picture: This is a successor of the Apostles, essentially winging it, speaking more like a CEO than his office, lying and making outrageous claims that even an atheist would be bothered by.

He has no business being kept in office, and to that point, faithful in Crookston agree and have started a petition to have him removed.

Archbishop Bernard Hebda of St. Paul-Minneapolis is leading the Vatican inquiry, and if he comes back with any other suggestion to Rome besides Hoeppner needs to go — like what happened to Malone — then Hebda needs to go.

These types of men have betrayed their office and have no business being in them.

The prayerful demonstrations in front of the chancery, even in freezing temps, have also begun, just like in Buffalo.

But he's not the only one, not by far. As we drift around the diocesan map, we can zoom over to New York, where Church Militant said in 2015 that Cdl. Dolan has no business being a bishop there.

His list of crimes against the Faith is atrocious — from covering up and lying about the Fr. Peter Miqueli case (the gay-for-pay prostitute hired by Miqueli, which made sensational headlines in the secular press), to bulldozing through the St. Patrick's Parade Committee to allow open homosexuals to march, to a host of other scandals not limited to his lavish retreat — a mansion in upstate New York.

But even more, he is setting his successor up for failure by failing to be a model of holiness who attracts and recruits young men to the seminary.

Over 10 years ago when he first came to New York, The New York Times did a piece on Dolan and how his larger-than-life personality would draw millions to St. Joseph's Seminary in New York. After all, this is big, gregarious Timothy Dolan — the laughing, guffawing, back-slapping prelate filled with joy and a magnet for young men to sacrifice their lives for Christ and His Church.

Well, more than a decade later, the numbers are in — and not so much.

Saint Joseph's Seminary opened in 1896 with 96 seminarians. It grew considerably from then. It was built for 280 men. But as of right now, there are just 17 seminarians studying in New York and they are scattered over four years of study.

There are just 17 seminarians studying in New York.

And bear in mind: Not every seminarian goes on to get ordained. Frequently they discern out of seminary.

The life of the clergy in a given diocese and the recruiting efforts are directly tied to the holiness of a given bishop. There's a story that sums this up. A bishop was meeting with some of his staff and lamenting the low number of seminarians in his diocese.

When he asked what ideas the staff had to boost the numbers, his vicar general answered, "We wouldn't have a problem at all if you were a better example of holiness."

I don't know if the vicar general got shipped off to St. Luke's a short while later, but you get the point.

Who among the U.S. bishops inspire young men to be like them? What bishop instills confidence and fortitude in a young man in his 20s debating and discerning if Christ is calling him and he is willing to give up wife and family in exchange for a spiritual family?

We know the answer to this question already. All you have to do is look at the current crop of sorry men lying, cheating, constantly campaigning for money and their hokey reputations. No young man would get his inspiration from them.

The plague-ridden seminary in Buffalo under Malone was a disaster, a homosexual hotbed dating from decades earlier.

Dolan's nearly deserted St. Joseph Seminary in New York speaks volumes as you hear little else than echoes up and down the hall, and, for the record, St. Joseph's is the catch-all for two other seminaries in the New York area that had to close up shop for poor enrollment.

And in Crookston, there are — count them — just two seminarians for the diocese of 35,000 Catholics; one is first-year and the other is second-year — in short, plenty of time for either to discern out and leave Bp. Hoeppner with zero ordinations, like he has this coming year and next year.

Bishops who cannot produce seminarians willing to follow them in holiness and commitment need to go. Not only are they destroying the Faith on their watch; they are doing so for the future as well. 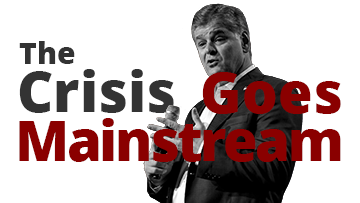 The Crisis Goes Mainstream
But not the crisis you think of every day.