Time Is Running Out

And they want your money before you die.

There are more Catholics in the United States over 65 than there are under 30. In fact, the percentage of faithful Catholics under 30 is very close to the lowest percentage of active participants of any religion in the United States. The number stands at 17 percent. The only lower of all religions measured by Pew Research were Mormons and Jehovah's Witnesses — both at 16 percent.

Another developing demographic disaster is the combination of marriages and conversions. In years past, many conversions came from mixed marriages — a Catholic and non-Catholic getting married. Many of these marriages resulted in the non-Catholic converting. That was the case with my own Catholic mom and former Protestant father. But these days, Catholic marriages are off by close to two-thirds from their 1965 levels. And when you add to that the reality that oftentimes owing to horribly poor formation, it is the Catholic spouse today who often converts to the non-Catholic religion.

There are so many demographics working against the Church that the future of the Church is going to be radically different than any of us have been used to. When he was still a little monsignor back in 1969, Pope Benedict gave an extensive radio interview on the future of the Church. Here is a small part of what he predicted of the Church's future: "She will no longer be able to inhabit many of the edifices she built in prosperity. As the number of her adherents diminishes, so it will lose many of her social privileges. ... As a small society, it will make much bigger demands on the initiative of her individual members."

And this is something we'd like to focus on in this Vortex — the material wealth of the Church. In the current economic climate that has existed now for more than a decade — flat wage growth, middle-class stagnation, younger generations with massive debt — it is just a simple reality that most of the nation's middle-class wealth is concentrated in the hands of the elderly. Now when we take that reality and combine it with the demographics of what's going on in the Church, it becomes startlingly clear that the Church has about one generation of wealth left to tap and then it's lights out.

Time is running out for the Church to gain control over her finances. The young people have less to donate to the Church and have largely abandoned any belief in the Church. This is going to have an enormous financial impact on the material wealth of the Church in the near future. Add to this that the last generation with any real financial clout is nearing death, and you can begin to understand why the many dioceses are in a mad dash to get as much cash as they can. There soon won't be any left.

In diocese after diocese, there are massive cash gathering drives going on, laughingly disguised as ways to "spread the Gospel" and rebuild the Church. In New York, they want $200,000,000 and are strong-arming individual parishioners through local clergy. Here in Detroit, there is a $130,000,000 campaign going on. Other dioceses are seeking to top the $100,000,000 campaign goal. These are enormous amounts of money, and it's one last great rush to get hold of the cash before the cash is gone. Remember, there is a cash-starved youth that doesn't have any real interest in the Church anyway.

So, bishops have figured out they better get when the getting is good because time is running out. But when you think about the underlying truth of this, it's kind of ironic. For the past 50 years, the hierarchy has spent like drunken sailors. Just look at the horrifically ugly L.A. cathedral if you want a leading example on diminishing Catholic identity. They paid huge sums to smash apart traditional looking churches and sanctuaries in a movement called "Reckovation."

They took your money and sent 100s of priests to Rome to earn all sorts of degrees and then many of those clergy come back here and promote modernist ideas which undermine the Faith and use those same degrees as a battering ram to claim intellectual superiority. Untold hundreds of millions have been spent on watered-down catechesis or even non-Catholic catechesis in thousands of schools, religious education departments, parish programs, textbooks, staff and so forth. How many hundreds of millions over these decades have been spent on the salaries and living expenses of priests who simply betray the Faith practically every time they open their mouths?

The list of examples we can give could go on and on but on the ground, many Catholic know this is all true because it's been their lived experience. Their children went to Catholic schools and lost the Faith. Their priests drone on about every Leftist talking point but say nothing about salvation and Hell. The churches have emptied out. The dioceses have grown poorer in terms of cash flow anyway, and now after 50 years of demolishing the Faith by either direct unfaithfulness or indirect indifference, the bill has come due, and now they want the older faithful to foot the bill for their infidelity. It's quite the nerve — seriously.

In a week or so, the U.S. bishops will once again be passing out their annual collection envelopes for the CCHD, the Catholic Campaign for Human Development, pretending it's for fighting poverty. In reality, part of that money goes to organizing for the party of death under the pretense of helping the poor. Their twisted logic rooted in class warfare in the party of death is the one that cares about the poor, so get them elected and poverty will be relieved. The facade completely crumbled a few years back when it was revealed that the bishops had been funding the scandal-ridden ACORN for quite a few years beforehand.

Here is the big question. Why would faithful Catholics give a red cent to those who had used that money to destroy and undermine the Catholic faith? Over half of all American Catholics have apostatized. More than 35 million Catholics in America have left the Faith. Much of this can be laid at the feet of the hierarchy and their pet clergy who have spread their nonsense — meaning heresy — of indifferentism and universalism.

Many dioceses still have vast holdings in real estate. They need to sell off those holdings and pay for their own crimes. Why would they think they can run the Church into the ground for decades and then turn around and hand you — the faithful laity — the bill for their actions?

It's mind-boggling and insulting. They really are Democrats in robes. 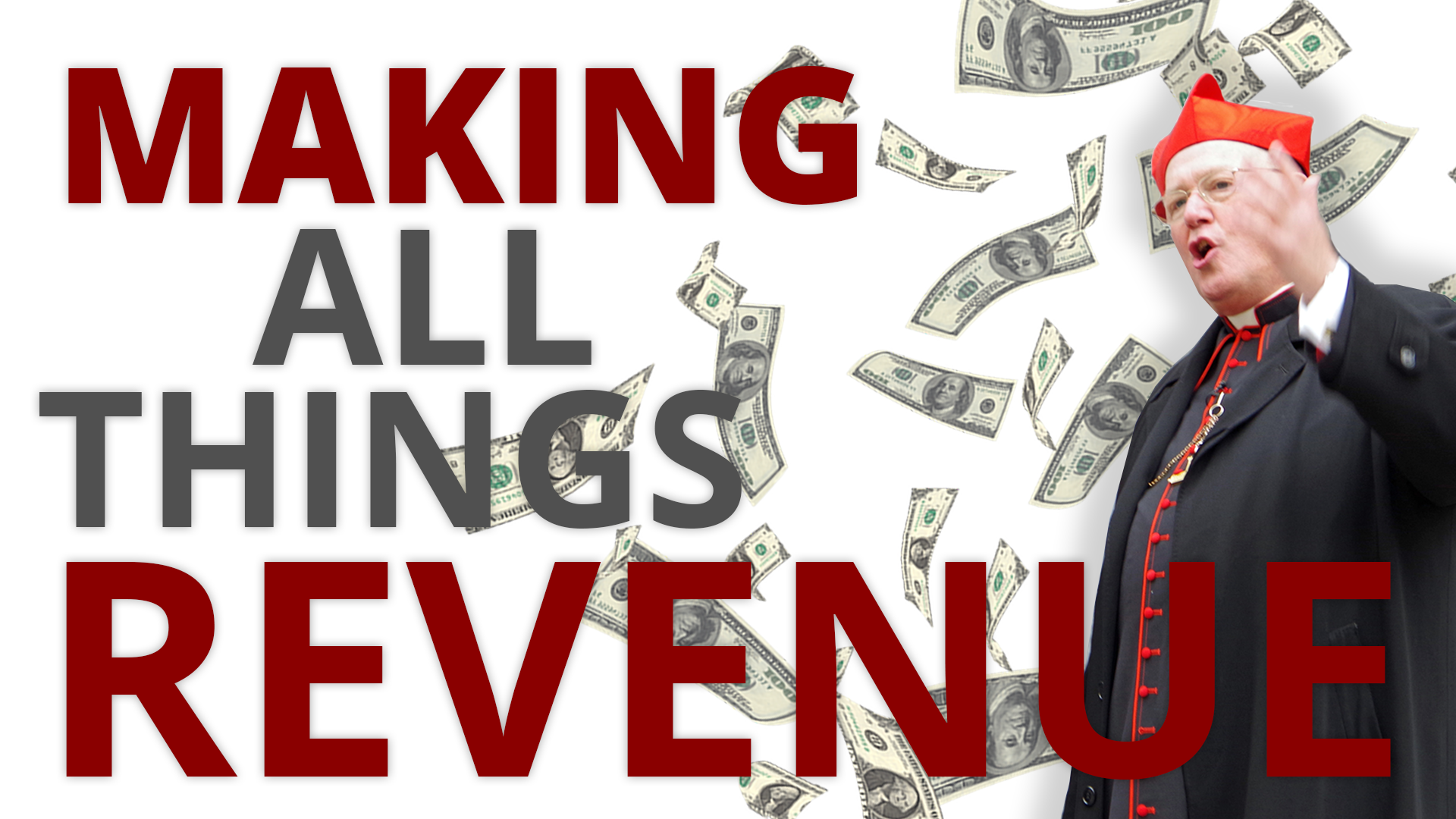 Making All Things Revenue
The bill is coming due.