Time to Get With It

A message (warning) for good bishops.

This is something of a follow up to yesterday's Vortex about the attack against Madison, Wisconsin, Bp. Robert Morlino. The rest of the bishops in the U.S. better sit up and take notice of this because the same thing could happen to every single one of you.

Twice a year, roughly six months apart, the U.S. bishops meet in a big assembly and discuss all sorts of things. But there's also a great deal of time for quiet conversations. Lots of times these quiet conversations are an opportunity for the bishops to get together and bellyache and commiserate with each other about shared headaches in running their respective dioceses.

That's understandable. People in the same profession and vocations often times find some comfort in consoling each other and being consoled. But Your Excellencies, the Church is burning down. There are more urgent things to discuss quietly amongst yourselves than the need to sell off properties or dealing with headaches from rowdy laity. Interestingly, among the bishops there are not a few who are more, shall we say, liberal, meaning not completely on board with the Faith. They want Holy Communion — sacrilegious Holy Communion — for those is sinful sexual relationships. They're fine with watered down catechesis being presented to the souls of the laity. The list is endless.

One of the hallmarks of liberals in every profession, clerical, as well as secular, is that they have no regard for rules or the Truth. They learn the process, the bureaucracy of how to ram things through, which is antithetical to the spirit of the mission and then twist and manipulate the process, all legally, of course, to produce something bad. This is what Cdl. Joseph Bernardin of Chicago did back in the late 1970s to impose Holy Communion being distributed in the hand throughout the United States.

Liberals and modernists are master manipulators and when they need to, they lie — hashtag fake news,  hashtag fake theology. It all bubbles up from the same wellspring. But conservatives generally tend to sit back and not really do anything. As one "conservative" archbishop I was meeting with said to me when I asked him why all the good bishops don't get together and develop a plan to fight against the evil from bad bishops which he admitted, "Conservatives tend to conserve. We are more concerned with what's going on in our own diocese. Liberals act like that. Not us."

That's true, but it's insufficient. The bad bishops get together frequently. They are on phone calls, conferences, publishing public letters, giving interviews, publicly backing dissidents and so forth. They are extremely well organized and have a plan. They meet, conspire, plan, execute, react, respond and come back again and again, just like their cultural and political liberal counterparts do. It's in the blood of liberals to fight, fight, fight or better said perhaps, rebel, rebel, rebel against the established order until they have overturned it.

Where does anyone think this attack against the good bishop of Madison came from? It may have originated with a change.org petition launched by a social justice warrior, but it picked up steam and is now the subject of Associated Press articles and even the local Madison, Wisconsin, ABC affiliate did a story on it on their nightly news. And the takeaway from all these secular reports is this — Morlino and his outdated hateful theology should be ignored and even condemned. And where are his brother bishops coming to the forefront to defend and support him?

Heck, we did a couple of reports on Fr. James Martin's evil and cardinals and bishops and other priests practically trampled each other charging out of the closet to defend him. Even his liberal pals temporarily running the show in the Vatican couldn't resist taking a very public swipe at us in the Jesuit mouthpiece magazine which of course prompted a spate of reports in the secular press calling us every name imaginable of which few came to our defense.

The point isn't to complain that practically no one backed us up, it's to say that whatever anyone, bishop or laity — whoever — steps out to defend the Church, the engine of the great big gay and liberal and dissident hate machine cranks up goes on the attack and "conservatives" sit back and conserve. Too many "conservatives" seem overly concerned about their own skin, meaning their careers or reputations or possibly hidden scandals or whatever.

They need to realize like the bad bishops have that the way you get your agenda shoved through is to band together and be relentless — plan together, scheme and plot together, protect each other, work with each other and so forth. You never see one of the bad bishops or their allies ever left to dry out on his own. A bad guy says something bad — an immediately a press report comes out supporting him and two other guys write an article or publish a letter or whatever, immediately presenting a united front so that the message is loud and clear — go after our friend, and we all will attack you. These men are master manipulators, but you can learn from your enemies even some of the time.

Good bishops need to take a page from the playbook of these bad guys and get with it before they get picked off one at a time. 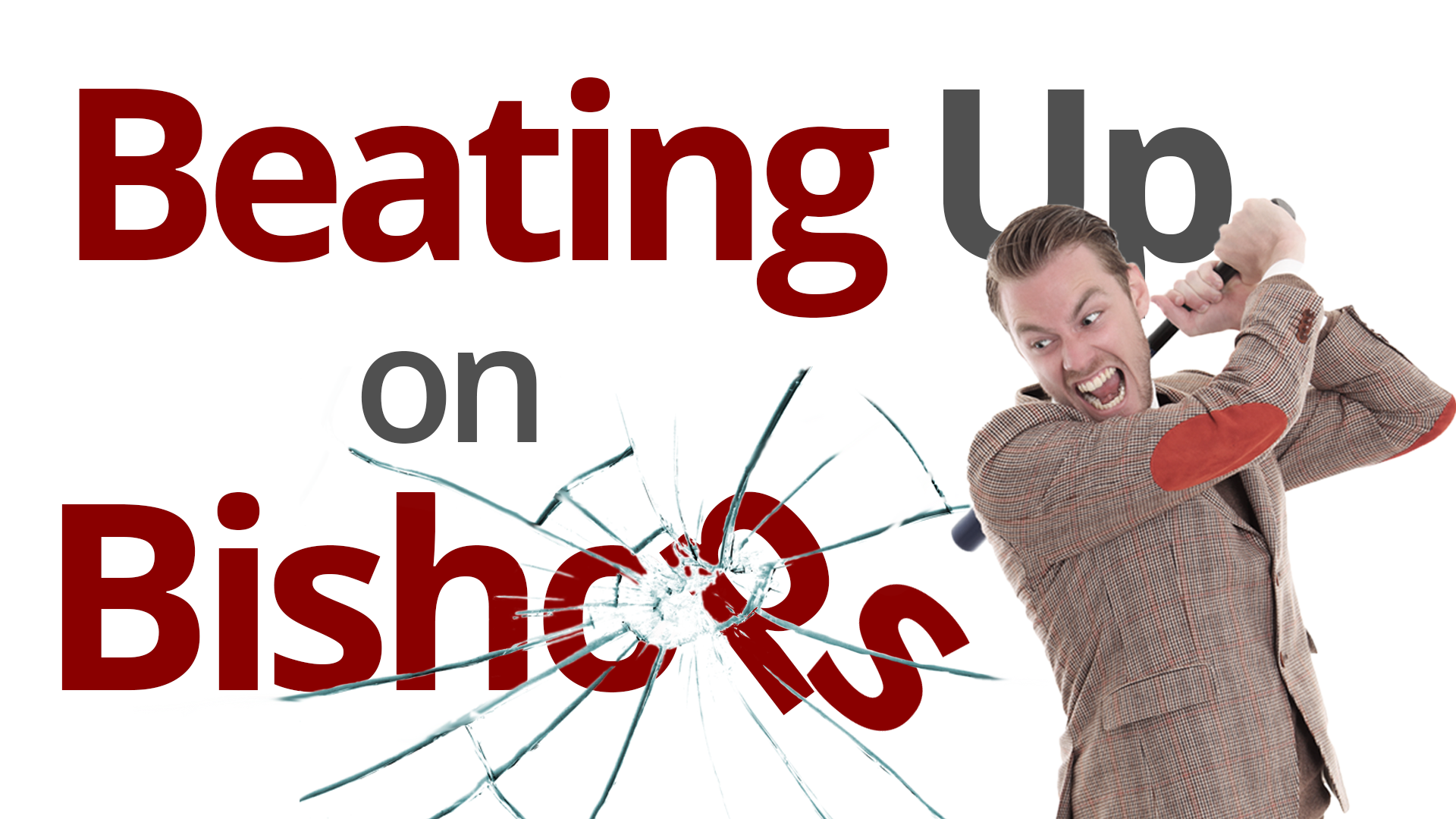 Beating Up on Bishops
Come to their defense.