The Church is being transformed into the Church of Gay.

Given the nature of this Vortex, we do not like to say we told you so, but we told you so. For years, Church Militant has been warning Catholics about the homosexual mafia in the Church. There are psychologically disturbed men who pose all kinds of threats to the faithful. Sodomite priests are pouring out of the closet, seizing control of the Church, and their list of their abominations is manifold and increasing every day.

We have been mocked and accused of anything and everything by so-called Catholic media for reporting these stories. Those same Catholic media get paid by and take their marching orders from various bishops, many of whom are supportive of or ignoring this gay crisis in their own ranks. We saw the eruption of their sinister doings with the sex-abuse scandal where huge numbers, of mostly altar boys, were sexually abused by a portion of these disordered individuals. But most recently, we are witnessing a virtual takeover of the Church by gay clergy and their equally mentally disturbed allies in the clergy, posing as though they care about the downtrodden.

Neighbors complained about the noise and visitors coming and going at all hours and their strange behaviors, and Vatican police responded, coming across the evil scene. The Vatican is refusing to respond to questions, neither confirming nor denying, which pretty much tells you all you need to know. The details may not be all fleshed out, but the story is there. And according to one senior curial member, "[H]omosexual practice in the Vatican has never been worse." But truly, as sordid as all this is, no one can reasonably expect anything different.

Homosexuality is based around promiscuous sex, looking for acceptance from other men but always giving way to lust, which is oftentimes acted on. This is why this evil must be stamped out in the Church and confronted at every turn. This round of abuse is now spiritual, although no doubt, some physical abuse is still going on somewhere with younger men because that is the nature of pederasty. Some years from now, this too will be revealed.

Leading the pack today of spiritual abusers is Jesuit homosexualist Fr. James Martin, who still refuses to admit publicly if he is sexually attracted to other men or even engages in sexual acts with them — a question, that in justice, he should answer publicly. He is currently operating under the cloak of just caring about people he says are marginalized in the Church. Holy Hades, gays and effeminate men run large portions of the Church! How exactly are they marginalized? There is hardly a soul who keeps up on all this who doesn't think that Martin is gay. So just for the sake of clearing his name, you'd think he would want to answer.

This past weekend, CNN's religion editor, Dan Burke, penned a story, which was in reality much more of a promotional piece for Martin's latest book, Building Bridges, in which the heretical priest goes all out to normalize sodomy. He says the Church and gays need to sit down and better understand each other and respect each other more, which is, of course, Church-gay-speak for "the Church needs to marry sodomites and forget all that God, Heaven and Hell nonsense." Ah, but that's just Martin. He's joined by various other clergy, higher ranking than his overblown self.

Cardinal Joseph Tobin of Newark, New Jersey, a large presence at the recently concluded Orlando Church of Nice convention, actually held a pilgrimage for active homosexuals in his Newark cathedral. Did anyone at the Church of Nice convention challenge him on that? It is unlikely. Challenging heretics was not on the agenda. Tobin welcomed them and their sin, open armed, and never mentioned a word about repentance, salvation, damnation. Nothing.

The bishop of San Jose, Patrick McGrath, issued a letter a few days back, saying active gays can receive the sacraments and funerals in his diocese. Another heretic bishop. Of course, San Diego Bishop Robert McElroy is all in for the whole gay agenda, publicly praising a "gay parish" in his diocese. He is another heretic bishop. Cardinal Cupich of Chicago sees nothing wrong with active sodomites approaching for Holy Communion if they have thought about it, and it's okay with their consciences. Of course, approaching for Holy Communion if you're okay with your own sin is a system set in place by Washington D.C. Cdl. Donald Wuerl over the question of pro-abortion Catholic politicians. Wuerl was the last bishop in America to shut down "gay Masses" on diocesan property while he was bishop of Pittsburgh. In Pittsburgh, he was even labeled "Wuerl the Girl" by the friendly homosexual community.

Before Wuerl arrived in D.C., there was now-retired Cdl. Theodore McCarrick, around whom also swirled dozens of rumors of homosexuality. McCarrick flat out lied to his brother bishops about a note written by then Cdl. Joseph Ratzinger, denying Holy Communion to pro-abort politicians. Is there no end to the heretic cardinals and bishops? And while this may all look relatively recent, consider what is now coming to the surface has just been lying hidden from the view of the laity for decades.

Dead Cdl. Joseph Bernardin had constant rumors swirling around him about his own sexuality, rumors which seemed confirmed by his decision to have the Chicago Gay Men's Chorus sing at his wake. Bernardin was essentially responsible for getting dozens and dozens and dozens of U.S. bishops named, many of whom proved to be gay supportive or gay themselves. Again nothing new here, just the fruit of the evil that has been going on for years and years by Catholic clergy who are gay and have been slowly seizing control of every level of Catholic life. Pope Benedict said in a recent book interview that he had to deal with homosexual cardinals.

Catholic seminaries have been hotbeds for decades for homosexual men, who then go on to get ordained and rise in the ranks through the efforts of their fellow sodomites, who protect and promote each other. A recent TIME magazine article on seminarians featured a quote from the current rector of the nation's largest seminary, Mundelein in Chicago, saying some of the men studying for priesthood are still working out their sexual orientation.

We have the case of N.Y. Cdl. Timothy Dolan promoting open homosexuality in the St. Patrick's Day parade in New York two years ago. There was the case of the homosexual priest Fr. Krystof Charamsa, working in the CDF in Rome, who came out publicly about his long-term relationship with his sodomite partner and making the announcement the day before the second synod began in 2015.

And these are just the more high profile cases. There are hundreds and hundreds of cases of homosexual priests and bishops and cardinals that don't get anywhere near the notoriety, but they are very real. The Church has been attacked from the inside, and one of the leading attacks squads are these psychologically disturbed men who are allowed to push their evil and disturbed thoughts on the faithful. These men and their intrinsic disorders, as well as the other men who are bishops who will not confront this evil for fear of their own careers or whatever, are all heretics and need to resign their positions immediately.

They have polluted the minds, hearts and souls of millions of Catholics, which was the plan all along and have created the "Gay Catholic Church." No wonder a few years back, The New York Times could correctly announce that the Catholic priesthood had essentially become a gay profession.

Good, holy, dedicated priests are smashed down under this homosexualist tyranny; and it is tyranny. You try challenging this homosexual superstructure if you are a priest, and you're done. You will be shipped off to nowhere faster than you can say homosexual mafia.

Catholic laity need to know this, all of it, right down to the last sordid incident because they need to understand that these sick individuals, psychologically wicked men, are destroying your chance at salvation by their lies and conniving. You are not hearing Catholic truth from them. They work for their father, the devil, and they do their father's will.

The heterodox revolution that took place in the Church in the 1960s has given way to the pink revolution where everything has been engineered to become feminized and sissified. The engineers are men who want to have sex with other men, and oftentimes do and use their collars to hide behind their office while they sponge off the Church, taking your money to live and eat and engage in their perversions.

And on top of that, they lie to you about Divine truths, stealing not only your money but your souls or the souls of your children. The whole lot of them are tools of Satan, and they must be stopped. Do not listen to them. Listen to the Church. 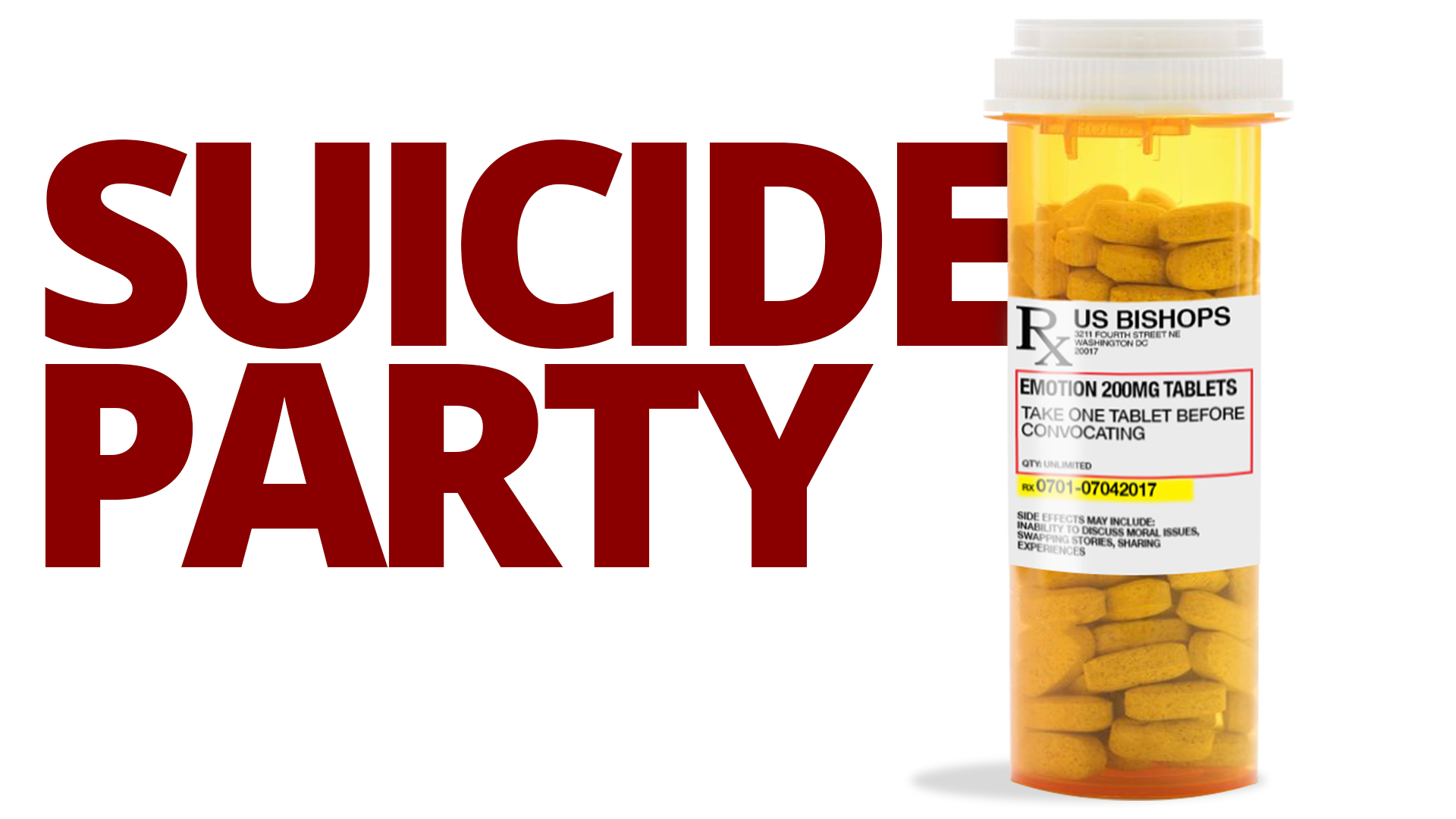 Suicide Party
As the Church of Nice kills itself, this gathering was fitting.