Catholics need to realize just how bad these bishops are.

The time has come for the current archbishop of Detroit, Allen Vigneron, to resign his office. He has shown simply too much tolerance for evil in this archdiocese for too long. But it's not just here in Motown where he has been overly tolerant.

While he was rector of the seminary here in Detroit, he routinely approved the ordination of very questionable men to the priesthood — including those who were gay.

While he was rector, he gave a pass to a faculty member who is a wildly liberal modernist nun who was, or is, a lesbian and who preyed on and abused at least two victims.

It all came public this month, and she was forced to resign, something Vigneron should follow suit on. All he did was issue a say-nothing statement apologizing and saying he thought the matter was "resolved." Sorry, not good enough — keeping a lesbian predator nun on staff is an automatic disqualifier.

But shielding predator religious and clergy is not a singular instance for Vigneron as new information coming to light indicates.

Before coming back to Detroit as archbishop — a gig various other bishop candidates had turned down prior to Vigneron accepting — he was bishop of Oakland, California.

While there, a victim of homosexual predator Fr. Stephen Whelan filed suit against the Salesian order of whom Whelan was a member. The victim, Joseph Piscitelli, was, in his words, violently abused by Whelan while at Salesian high school in the bay area.

In 2005, he met with Vigneron at the Oakland chancery and told him about being a victim of the homosexual predator and how it had caused him immense suffering for years. Vigneron acknowledged the suffering, said some kind words and even called it a "travesty."

At the time, in the blow-up of the Boston Globe revelations, Vigneron was on something of an apology tour throughout the diocese of Oakland. He promised Joseph that at the next apology tour appearance, which was also the last scheduled one, that he would add Whelan's name to the list of priests he was publicly naming and make a public apology to Joseph for the suffering he had endured.

But during the event, Vigneron said nothing about what Joseph had told him, as he had promised. Joseph stood up and challenged Vigneron out loud and accused him of shielding homosexual predator clergy. This happened on March 28, 2005 at St. Raymond's. Many people in the church applauded Joseph's challenge.

Joseph sued and won his lawsuit. The Salesians appealed multiple times and lost on everyone one of them. The next year, he confronted Vigneron, who was rude and dismissive to him.

Another public confrontation and challenge to Vigneron at a protest at the Oakland chancery a year later resulted in the shepherd calling the DA to get a restraining order against Joseph. The DA investigated the claims and denied Vigneron's request determining it had zero merit.

When Vigneron returned to Detroit as the new archbishop, he brought his "anything goes" attitude with him. He did nothing about a group in the archdiocese known as the Elephants in the Living Room, hippie-dippie priests from the Cardinal Dearden era — just like Vigneron.

They advocate for women priests, homosexual freedom, use of contraception and so forth — the whole liberal agenda. Many of them are actually pastors, steering souls away from the truth, and Vigneron totally tolerates them as he tolerated Sr. Mary Finn and her lesbianism at his seminary.

He also did nothing about seven of the eight Catholic hospitals in the archdiocese dispensing birth control. One of the hospitals even had an abortionist who was director of Michigan Planned Parenthood. It was only when lay people, who had informed Vigneron years earlier of all this went public, that anything was done, and then, it was only minimal.

Vigneron kept on his staff — even until today — his communications director, Ned McGrath, who helped cover up homosexual predator Fr. Gerald Shirilla, who sexually abused a number of teen boys hundreds of times.

Vigneron has not lifted a finger to bring an end to the oldest homosexual Mass in the world. The local chapter of Dignity — officially condemned by the Vatican — operates the longest continual gay Mass in the world, and despite protests and appeals from the faithful, Vigneron simply allows it to continue.

Vigneron is the main impetus behind the highly protestantized evangelization program, Alpha, now being conducted in a large number of dioceses under the excuse that it is a first step — a first step which makes no mention of the Church, the sacraments, the saints, the devotional life, the Mass, not a blessed thing Catholic.

What it does say about Sacred Scripture gives the impression that Scripture is the sole authority. In fact, until recently, that is exactly what the video instruction claimed until it was changed to now just imply it.

Vigneron is the very model of a modernist bishop. Trained under and ordained by ultra-liberal Cardinal John Dearden, the very man to whom Cardinal Joseph Bernardin owed his destructive career to. Vigneron tolerates way too much, all in the name of toleration.

He is overly friendly with the area's Muslim community, never missing a chance to give the impression that we are all on the same path to the same God — which we are not.

But it doesn't matter if it's tolerating homosexuality among his clergy, covering up for their sins, allowing his staff to cover up for their crimes, Protestant faith formation presented as Catholic, pro-gay, pro-women's ordination pastors running his parishes, Catholic hospitals dispensing birth control — you name it. It all goes in Detroit.

And oh yeah, Vigneron wants to bilk another $200 million out of the laity to keep the Faith vibrant in the archdiocese. To which inquiring minds respond, what faith?

Are there multiple bishops throughout the country just like him? Yep, you bet; they all need to go to. These men need to have the integrity to resign and stop pretending to innocent or naive sheep that they are guardians of the Deposit of Faith. They are not. They are destroyers of souls with their watered down Catholic Lite, Church of Nice demonic work — which is exactly what it is.

Most of these modernist bishops are little else than money-hungry Episcopalians who are more comfortable with easy-going Protestantism than authentic Catholicism. They might have a nice way about them — or a creepy, smarmy way. Their personalities and dispositions mean nothing.

In their cases, tolerance is not a virtue, because at the end of the day, it isn't really tolerance. It's permissiveness, the permitting of evil.

What matters is whether they are faithful to their office, and if they are not, like Vigneron and so many others, they need to go. 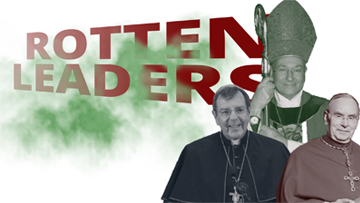 Rotten Leaders
They will get exactly what's coming to them.