These men need to be off the scene.

After having tried for decades to keep the corruption firmly under wraps, the U.S. bishops are now at a point where it's no longer possible.

There's simply too much, like 20 pounds of garbage in a 13-gallon can; it's spilling out all over the place.

So now, the pivoting is happening, and loads of bishops are appearing to jump on the bandwagon of reform but don't believe it. It's a giant deflection, a total whitewash — as usual.

They are only talking about reform and so forth because so many of them have been discovered and publicly exposed for the moral criminals they are.

Ask yourself this question: If all the news had not broken in The Boston Globe and The New York Times, and The Washington Post about their complicity in on-going moral, sexual and financial scandals — again, too many to count — would they be so eager for "reform"?

They got caught, and now they're trying to make themselves look like heroes and champions of reform — what a load.

If their desire to reform was genuine and authentic, many of them would resign, admitting publicly that they are the ones who caused this unfathomable mess in the first place. But instead, we have more of the same — bishops policing themselves.

And to provide a very simple highlight, Abp. William Lori of Baltimore, who is the supreme chaplain of the Knights of Columbus (KoC), an establishment bishop if there ever was one, wrote a brief editorial in the latest issue of the KoC publication.

Before we get to the editorial, just a little background.

Lori is a "career" bishop. He's been on more than a half dozen committees of the U.S. bishops' conference. He's the archbishop of Baltimore, the see of the United States; he's chancellor of Mount St. Mary's Seminary, former chairman of the board of Catholic University of America — you get the picture.

In his home archdiocese of Baltimore, he has left unchecked and in place the openly gay goings-on at St. Matthew's parish and Fr. Joseph Muth, including marching behind a parish banner in the city's gay parade, welcoming practicing homosexual couples and baptizing their children.

Lori has made no move to stop any of it, which he could do in a heartbeat.

Earlier this summer, he was appointed by Pope Francis, which means the recommendation came from Blase Cupich, to go to West Virginia and clean up the scandal created by Bp. Michael Bransfield, who had ripped off millions from the diocese, boozed his way around the diocese to the tune of a thousand dollars a month and sexually harassed and bullied his seminarians.

All of that was detailed extensively, and more, in The Washington Post.

When Lori arrived, he was approached by laity who wanted an independent auditing system put in place moving forward.

Lori told them to drop dead; they started a campaign to withhold all funding, and then Lori reversed his earlier position under threat of a diocesan-wide financial boycott.

By the way, in his role as supreme chaplain of the Knights, Lori is in full agreement with the policy of national leadership to leave in place knights who are pro-abortion politicians.

He has never suggested that these child murderers within the ranks of the Knights should be expelled.

So Lori offers practically no outspoken opposition to sodomy or abortion in his actions. He leaves the wicked people in place. There's much more that can be said about Lori, but it's enough for now.

You need to know that background because it sheds a great deal of light on the sheer hypocrisy and scandal of his editorial in the KoC magazine.

In his ramblings, he says, "[T]here is a much deeper reform that is more necessary than ever. ... We have to reject moral relativism and the compromises with evil that follow in its wake."

Um, what? Come again, Your Excellency? Can you give us a little more detail regarding what you mean by rejecting compromises with evil? You mean like your ongoing compromise with pro-abort politician Knights of Columbus? You mean like your ongoing compromise with the gay agenda taking place within your own archdiocese? You mean your business-as-usual approach to the concerns of the faithful Mountaineer Catholics in West Virginia who had to begin a boycott to get you to make the right decision about financial controls?

Lori goes on to say, "A profound conversion on the part of the Church's shepherds is essential, but for this reform to take hold it must include all of God's people."

While that's true as a stand-alone statement, it's the implication and the arrangement of the thought that reveals just what a snide comment that is.

Any reform must begin with the bishops — the shepherds — because you are the ones — not us, "God's people" — who condone homosexuality, remain nearly stone-dead silent on abortion, refuse to preach the hard truths of the faith, allow heresy and apostasy and dissent to run wild.

"God's people" have no authority to stop any of that. Only you do, so to try and shove it off on us as though the bishops and the laity have an equal part in this gigantic dismantling of the Faith and its much-needed restoration is insulting.

You are the ones who flirted with the whole gay thing during your years in seminary back in the 1970s and 80s.

You are the ones who gave the seal of approval to ordaining thousands of psychologically disturbed men who went on to use the Church as their own personal property for addressing their lust.

Frankly, how dare you insinuate that the faithful have some equal share in this. If we have equal share, then this equal part of "all God's people" says you should resign en masse.

But you continue to promote and protect friends who are fellow bishops and clerics who are gay, or dissident — or both, which is usually the case.

Where's your editorial to the Knights denouncing the evil of James Martin tromping all over the country promoting sodomy and distorting Sacred Scripture?

Earlier this week, Bp. Robert McElroy of San Diego, a heretic-minded prelate if there ever was one, actually came out and said, publicly, about climate change, "If we don't get this issue right, in the end none of the other issues are going to matter, because human dignity will have been destroyed as we know it if our planet is destroyed."

So the most important issue for that disgrace of a successor of the Apostles is climate change.

Every year, a million babies are destroyed in their mothers' wombs, to take just one issue. But this disgrace, man-made climate change, which isn't even established scientific fact, is more important.

Forget that millions and millions of Catholics have walked away from the Church, thus endangering their eternal salvation.

Forget about the entire industry which has been erected around sex, contraception, abortion, pornography which is ripping families and future families apart.

By the way, talk about a horror. The rumor right now is that McElroy is going to be going to Chicago as archbishop and eventual cardinal, because Cupich is going to Rome to escape from any potential criminal investigation — just a rumor right now, but not unfounded.

So pivoting back to Lori, who used to be on the U.S. bishops' pro-life committee, where is his retort against McElroy?

He didn't waste any time telling "God's people" to reform, but when it comes to a heretic-minded bishop — or a subversive priest in his own archdiocese, for that fact — he seems to have lost his nerve.

To even include the laity in a discussion about reform of the Church when at the same time you shut them out and allow dissident clerics to drone on fighting any "authentic reform" is diabolically disingenuous.

None of these bishops, especially the older crowd who caused this meltdown, have the slightest intention of "authentic reform."

They are merely trying to give the appearance that everything's all taken care of folks.

Everything is definitely not taken care of — not as long as these cowards, liars and wicked men are in office.

Their schemes and plans and lies must be opposed, publicly. Do not fall for their all honey speech and total whitewash.

No "authentic reform" will come until those who are daily subverting are off the scene. 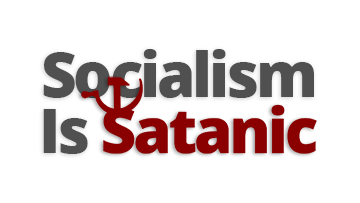 Socialism Is Satanic
'Justice' for all is a lie.