Created to be a saint, but damned for eternity.

Today is, of course, Holy Thursday, a day with a wide range of emotions. It's the day Our Lord's Passion actually begins as He leaves the table and proceeds to Gethsemane. It's the day of the institution of the Holy Eucharist and the priesthood, which happened at the Last Supper.

And it's also the day of the betrayal of Judas, a betrayal that so wounded the heart of Our Blessed Lord that, a thousand years before in anticipation of it, He cried aloud in the Psalms, "Thus even my friend, in whom I trusted, who ate my bread, has turned against Me." There is a certain sense of divine irony at work here, in addition to infinite sadness.

When we look at Judas, who was damned for his betrayal, regardless of the babblings of certain theologians trying to rehabilitate his image, we see a complete rejection of faith — and the rejection is over the Eucharist. It is from the Last Supper, where the Eucharist is first made real, that Judas gets up to execute the plot he has worked out with the Jewish leaders.

But Judas' betrayal against Our Lord did not materialize out of thin air. At some point, he lost his faith in Jesus. Like so many in the Church today, he no longer believed in what Our Lord said or who He was, but he still hung around, sensing that some kind of earthly kingdom could dawn, a new way of living, an earthly paradise where the poor would achieve justice, even though he himself was a thief and profiting from this vision.

The first indication that he was no longer in union with Our Lord came, fittingly enough, when Our Lord spoke to the masses about the necessity of eating His Flesh and drinking His Blood. The scene happened a year before He would be crucified in the synagogue of the hometown of Peter and Andrew and James and John.

It was here, at this announcement, a prefiguring of what He would later do in the Upper Room, that the crowds deserted Him. It is the one, single occasion in all of the gospels where what Jesus says causes His followers to get up, walk away and abandon Him. This happens nowhere else.

And the issue, the very issue which causes the mass desertion, is His declaration about the Holy Eucharist, the necessity of eating His Flesh and drinking His Blood. And remember, once the crowd forsakes Him, He turns to His band of Apostles and asks if they too will abandon Him.

This is where Peter utters the beautiful phrase, "Lord, to whom would we go? You have the words of everlasting life." And for most people, the story ends there; they never apparently read on. But the account ends with the condemnation of Judas by Our Lord, when He says, "One of you is a devil."

Even though Our Lord does not reveal the identity of which Apostle is a devil, future events would bear it out. It was Judas. Our Lord would later say of Judas: "[B]ut woe to that man by whom the Son of Man is betrayed. Better for Him had he never been born," which could only be a reference to Judas being damned.

At another point, Judas is called the Son of Perdition. These are not terms used in conjunction with eventually being saved. Judas' betrayal of Our Lord could be termed as a eucharistic betrayal. It began in his mind when he rejected what Our Lord said in Capernaum about the absolute necessity of eating His Flesh. Without doing so, He proclaimed, a person has no life within him.

Judas did not get up and join the crowd with his feet, but he did join them in his heart. No one should be surprised that Judas went to set the trap after leaving the Last Supper. It was, in fact, altogether fitting.

What began as a rejection by Judas of the Holy Eucharist at its announcement in Capernaum was completed at its realization in the Upper Room. And Satan entered into him.

What was the signal that Judas was the one who was about to betray the Son of God? His dipping of bread, just as the Psalm foretold. The sign of betrayal was also the object of betrayal — bread.

But as God the Father revealed to St. Catherine of Siena, it was not even Judas' betrayal of His Divine Son by which he incurred the divine wrath, but his despairing of the mercy of God, whose fountain of compassion never ceases to flow. He regretted his actions and had remorse, sure enough, but he did not repent. He did not seek forgiveness, which would have flowed like a river over him had he but prayed for it.

The story of Judas could have been the greatest turnaround story in all of Catholic history. Young people today, when asked what school they attend or what parish they go to, could have been answering, "I go to St. Judas."

Judas, the son of perdition, is damned, and Our Lord's words about him have come to fruition. Better for him had he never been born. And the rebellion in his mind, heart and pride began with his refusal to believe in the Eucharist. It began there. It ended there. And it had been prophesied there. Jesus Christ is the Holy Eucharist. Rejection of "it" is rejection of Him.

It's all about the Holy Eucharist. The lot of Judas proves it. 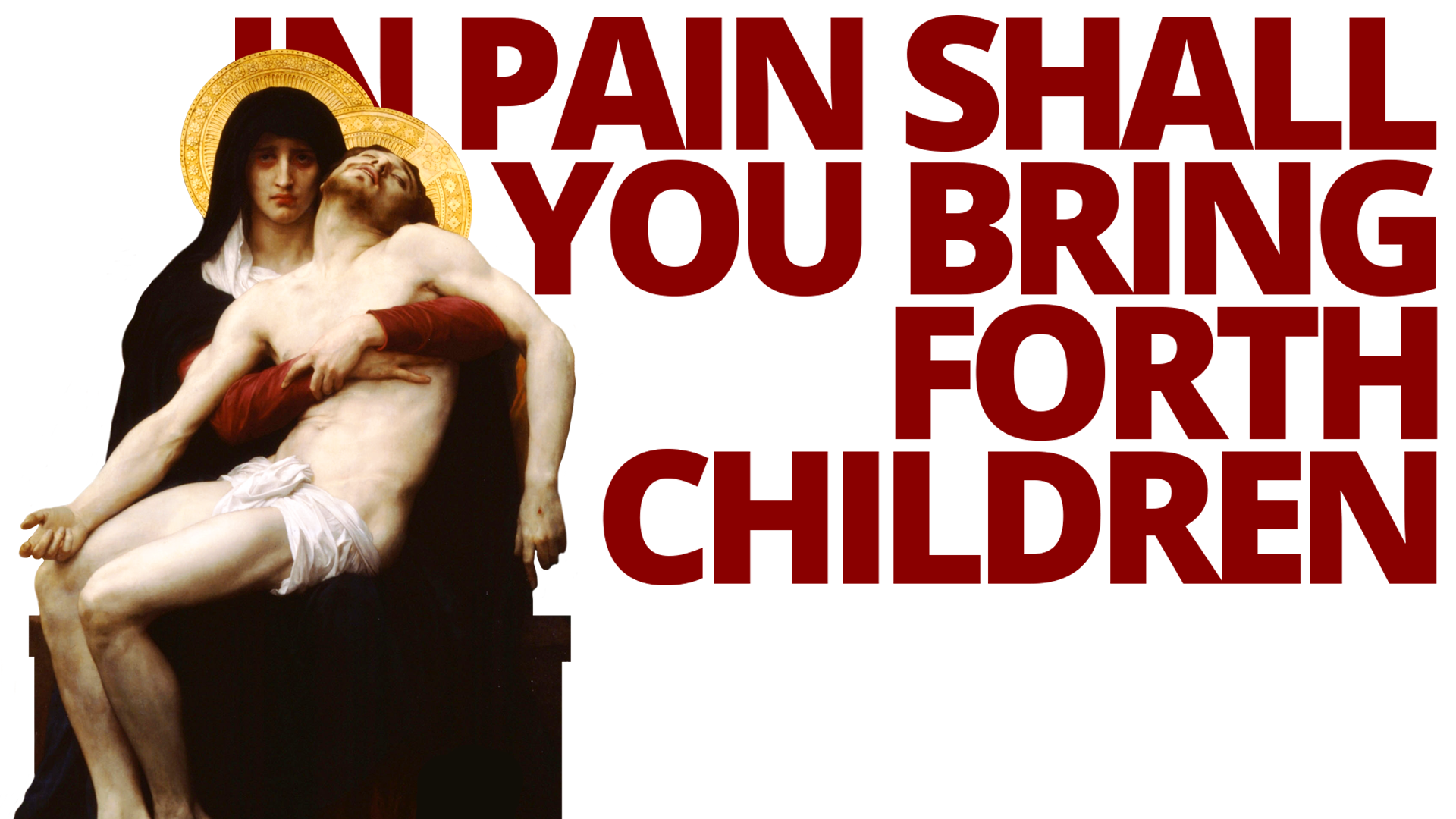 In Pain Shall You Bring Forth Children
Such is the price of redemption and cost of sin.