Trump and the Vatican

I'm Michael Voris coming to you from St. Peter's Square in the midst of the worst crisis in the Church for centuries — and arguably ever.

The horror of homosexuality seizing control in the hierarchy is manifest in a thousand different ways. And for the record, all those naysayers who have been attacking Church Militant for years saying we have been making all this up, or greatly exaggerating it, pause for a moment and consider:

A former papal ambassador to the United States is in hiding in fear of his life for outing the homosexual current here in Rome.

A Chicago priest is in hiding for fear of his life for crossing swords with Cdl. Blase Cupich over the homosexual agenda.

Faithful Catholics are being forcibly removed from so-called listening sessions in Bp. Robert McElroy's San Diego diocese when they bring up homosexuality in the clergy.

Various other priests have been censored and threatened by their respective dioceses for preaching against these evils.

Donald Wuerl had to resign his office as archbishop of D.C. owing to the homosexual predator priest scandal he helped cover up while bishop of Pittsburgh.

Credibility of the bishops and cardinals is at an all-time low as enormous numbers of faithful Catholics believe they are lying about what they knew.

Pope Francis' popularity is tanking as reports continue to surface that he not only promoted gay predator McCarrick despite knowing his evils, but also covered for predator priests while in Argentina.

And here in Rome, Vatican sources report there is an epidemic of homosexuality among the clergy — still think there's nothing to this story?

And when it comes to homosexuality, as we said, it manifests itself among the clergy in various ways.

The homosexual current identified by Abp. Viganò has had to twist itself into theological pretzels trying to legitimize sodomy, so much so that they even dreamed up this phony Synod on the Youth as an excuse to say, we need to better understand gay sexual activity and gay so-called marriage because that's what the young people are clamoring for.

In their rush to make their own psychological depravities appear normal, even to the point of wanting to change the words of the Catechism, they have fastened themselves to the phony social justice agenda of the political Left.

Everyone wants to feel good about themselves and be seen as moral and righteous, so the gays here in Rome in their collars and miters long ago linked arms with the climate change crowd, the anti-death penalty forces, the illegal immigration politicos, the gun-control Establishment, the overall globalist agenda and so forth.

Those moves, again motivated by a desire to be viewed as moral in the midst of their sexual depravity, have placed them in direct opposition to the Trump White House.

As far as homosexual so-called "rights" go, Trump is pretty neutral. In fact, many politically conservative Christians aren't too happy with that aspect of his agenda since it is directly opposed to the gospels — which makes it curious why the homosexual power brokers here in the Vatican and controlling affairs in the Church — for now — would be so opposed to Trump. He's hardly an enemy of the gay agenda, after all.

But the Fr. Martins and Blase Cupichs of the world, as well as the Kevin Farrells and the Joseph Tobins and Rodriguez Maradiagas, all recognize that in order to swamp the Church with the acceptance of sodomy as they are Hell-bent on doing as their number one aim, it's best for them to cast their lot with the rabid pro-homosexual political side, which also happens to favor all the above-mentioned goals.

So that makes Trump public enemy number one here in Rome. In fact, sources here in Rome confirm that in the run-up to the 2016 U.S. presidential election, homosexual predator McCarrick was the official unofficial liaison between the Vatican and Team Hillary.

According to sources, the mood was as glum here in Rome on that election night two years ago as it was at CNN headquarters.

With the announcement late last week that Trump's Justice Department has begun an investigation into the possibility of human sex trafficking in the United States, a kind of deep concern is gripping some in the Vatican.

Likewise, Church Militant can now report that we have confirmed law enforcement officials have begun looking into the Papal Foundation headquartered in Philadelphia.

The Papal Foundation's board of directors includes every cardinal in the United States, and that news will not go down well here in Rome either.

Earlier this year, it was revealed that Wuerl and McCarrick had pushed the lay members of the board of directors hard to dole out $25 million to a shady hospital here in Rome at the personal request of Pope Francis.

As Church Militant reported a couple of weeks ago, McCarrick was operating in a severely compromised state of a conflict of interests.

He knew at the time that an investigation by the Vatican into his sexual crimes had been approved, and yet he pushed hard, along with Wuerl, for a huge sum of money to be given to his eventual judges — the very definition of a conflict of interests.

Also sitting on the board, since he is an American cardinal, is Timothy Dolan of New York, who also knew about McCarrick because it was his archdiocese that had reported the original crime to the Vatican almost a year earlier.

It is a Trump-appointed U.S. attorney who is beginning the human sex trafficking investigation in Pennsylvania, exploring whether any minors were taken across state lines and if perverted prelates were involved in covering it up.

As long as Trump is in the White House, there are an awful lot of homosexual nervous nellies here at the Vatican.

If a case begins to build on an international level that the Vatican, especially under Pope Francis, has had direct knowledge of all this, access to international financial avenues could be cut off and who knows what else.

Pope Francis and the Vatican homosexuals were rooting hard for Hillary. There is, in fact, a strong rumor in Rome that McCarrick, and probably others, were involved in funneling Church money to the Clinton campaign. The Brett Kavanaugh disaster which has emboldened political conservatives back home was also being watched closely here in Rome because of the political fallout of the liberal agenda.

Kavanaugh is widely viewed as the fifth vote to overturn Roe v. Wade, which would be a tsunami crashing into the Left's agenda — in the United States and internationally.

Again, it was Trump who nominated him and stuck by him. And on the issue of abortion, it's not that the theological homosexual Left here at the Vatican and elsewhere throughout the Church are pro-abortion, it's just that they are neutral toward it because, one, they care much more about gay sex than the murder of over one billion children worldwide, and two, they could never break ranks over the issue of abortion with the political Left who are strong allies of theirs in advancing homosexuality.

Trump is pro-life, anti-Left and is the antithesis of everything the homosexual current here in the Vatican wants to see advanced.

It's a safe bet that, like 2016, there will be a lot of TVs on here overnight in a couple of weeks when the U.S. midterm election results start flowing in.

As a note, Church Militant will be once again producing wall-to-wall coverage, just as we did in 2016 for the Trump victory, where we were the first media outlet to say that Trump had won Pennsylvania and, therefore, secured enough Electoral College votes to win the presidency.

That coverage will begin live from our studios at 7 p.m. Eastern Time and run until we know the outcome.

Trump is a massive, massive migraine for Vatican homosexuals and Pope Francis. Had Hillary won, there would be very warm relations between Washington and Rome.

As it is now, there are 15 state grand jury inquiries going on, two federal investigations, the globalist agenda of the Left is in full retreat and, in an ironic twist, it was an American cardinal, homosexual predator McCarrick, and the papal ambassador to the United States that got this whole ball rolling. 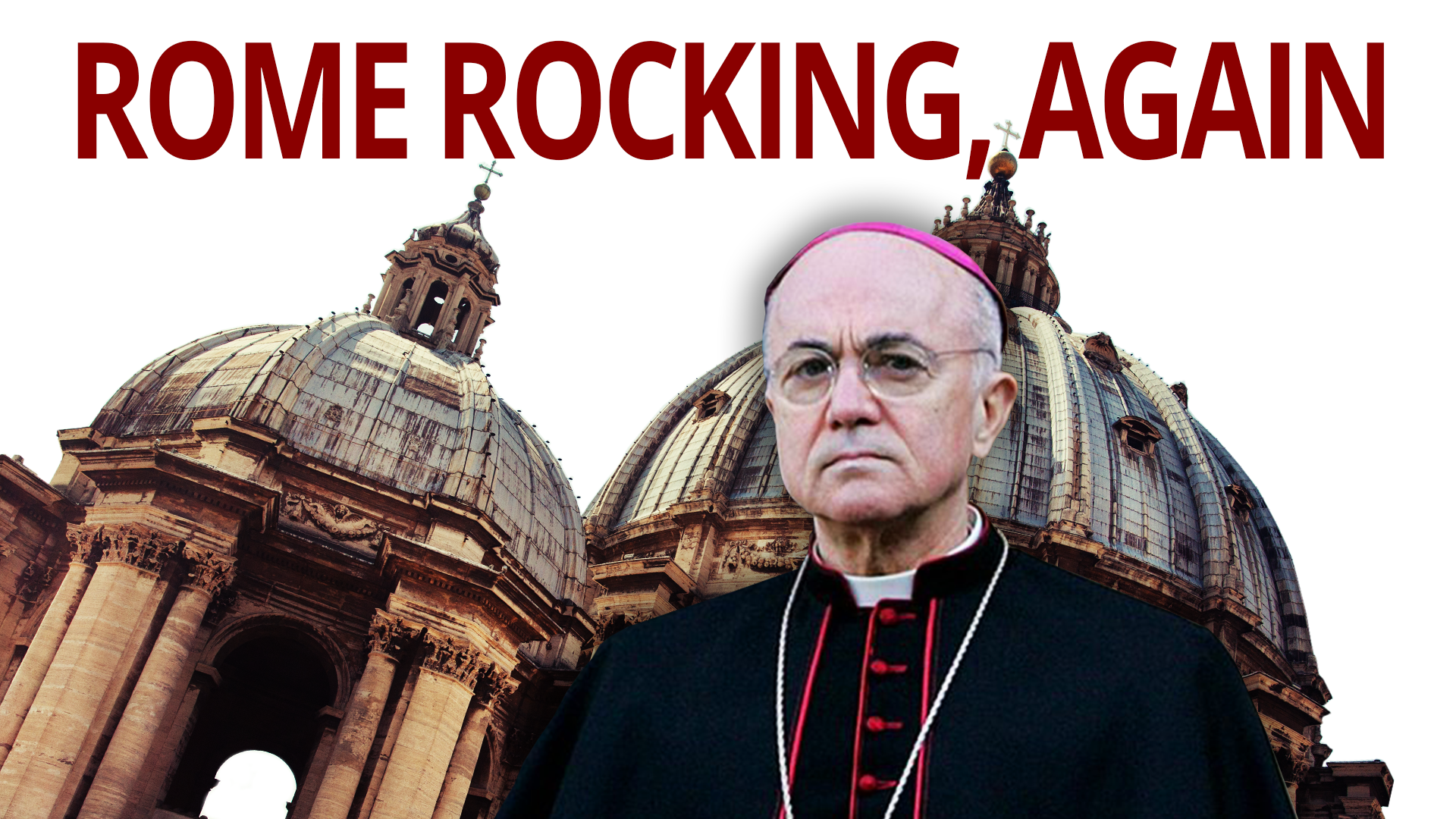