It's come down to this.

It's no exaggeration to say that every single ungodly force you can think of is arrayed against the re-election of Donald Trump. It really has come down to Marxism, under the thin guise of globalism, trying to smash the last great hope of preserving some semblance of Western civilization — and that is the United States.

And without a doubt, the United States has some major problems internally on its slippery slope to self-annihilation owing largely to an embrace of Protestant liberalism, which then penetrated into the Church, introduced by Catholic Churchmen who were Protestant themselves at heart, owing to their homosexuality or careerism or whatever other fault they weren't man enough to vanquish.

The near-complete dismantling of the authentic Church is on show for the world to see. It has been supplanted by what we could call "Catholicism Inc." Catholicism Inc. is the subversion of the Church for purely political and earthly ends, the co-opting of doctrine to advance a vision of the world decidedly anti-Catholic and anti-Western civilization, but dressed up in religious-and-spiritual-sounding language to make it appear holy and beyond criticism.

It is neither holy nor should it ever be beyond criticism because at the heart of it lies the destruction of the Church. Marxism has seized hold of Catholicism Inc. It seeks to destroy all that went before and replace it with a world of darkness where humanity, made in the image and likeness of God, is enslaved.

President Trump sounded some of these very themes in a speech two summers ago in Warsaw where he reminded them of their Marxist, communist oppression. And then he reminded them of a spiritual earthquake that happened on June 2, 1979, when Pope John Paul II led a crowd of a million Poles in Victory Square, a moment which signaled the eventual end of the Soviet Union, 10 years later.

The U.S. bishops, the hierarchy as a collective, are enemies of Western civilization.

Trump's success has been his ability to recognize mega-trends, the critical moments that define and shape history. What Trump needs to quickly realize (and those around him need to instruct him on) is this: The U.S. bishops, the hierarchy as a collective, are enemies of Western civilization. Some, in fact, abhor it and use their power and wealth to subvert it at every possible turn.

Like many in the Vatican, they are Marxists dedicated to ushering in a new world order that has nothing to do with the preceding Western civilization. They want that civilization gone, swept from history, and they are using Marxist narrative themes like manmade climate change, illegal immigration, rioting, racism, defunding the police and Wuhan panic as political-policy weapons to usher in the new world order.

It's why the most powerful among the bishops remain dead silent in the face of statues of Catholic saints being torn down, images of the Queen of Heaven being defaced and even statues of the Savior being beheaded. They are using the second greatest commandment to attack the First Commandment.

They have inverted and perverted the Church's glorious social teaching and weaponized it to create an army of social justice warriors hell-bent on the destruction of the West. They use billions in U.S. taxpayer dollars (that Trump should cut off) to create chaos and political mischief. Some of their money actually goes to groups supporting the violence, riots and defunding of police, all in an effort to so destabilize the country that Trump is not re-elected.

These elements within the U.S. hierarchy and their battalions of social justice warriors understand that America is the last domino to fall — that Western civilization is now dependent on the United States of America, with all its flaws, with all its own evil to confront and reverse. But there is still, within America (at least for now), a large number of people, many of them faithful Catholics, who will rally to the defense of God and country. You just won't find many of them among the unfaithful bishops.

A more wicked collective group of men in the history of the Church you would hard-pressed to identify. They have betrayed God, Church, faithful: Of course, they betray the country. President Trump must speak to the Catholic peasants who have been hoodwinked by these men, told that all that matters is social justice, that they are racists and privileged and should feel guilty.

Evil has left not one stone unturned in trying to bring about the installation of Marxism in the United States through the defeat of President Trump in November.

The vocabulary of the Church's social teaching has been stolen by these phony-baloney shepherds who are intent on the supplanting of the Church with a new world order. Trump must take it back; he must reclaim for the average Catholic the underlying truth of what justice really means, what true charity is.

It is precisely by perverting these things that these wicked bishops and their Marxist cohorts have, for decades now, created chaos and confusion in the ranks of Catholics, building up so many of them to be loyal Democrats in the mold of Joe Biden and Nancy Pelosi. Those two trumpet their phony Catholicism at the drop of a hat, yet they are no more Catholic than Attila the Hun or Genghis Khan.

They are, in fact, heretics and apostates who are supported in silence by equally heretical or apostate bishops who allow evil to run wild in the Church because they understand the necessity of undermining the Church. Given the importance of the Catholic vote in the battleground states, if Trump wants to be re-elected, this key element must be acted on without delay. Catholics must understand that their bishops have been duped and betrayed and weaponized into a force to get Democrats and their incremental Marxism elected.

Trump must speak to this. We are on the brink of the end of Western civilization. It's been arriving at this point for many years, but the moment itself is now upon us. Two summers ago, he was speaking in Poland, but he was speaking to Western civilization. Everything is now in gear — economic chaos, distress, riots, fake health panics — evil has left not one stone unturned in trying to bring about the installation of Marxism in the United States through the defeat of President Trump in November.

A time of prayer and fasting is now here, a rededication to the glories of the Faith that built this civilization. We must first resist with all our strength, body and soul, and then we must restore. As much as we do not deserve it, pray "God have mercy on us," and rout the foe for the sake of the future of our children. 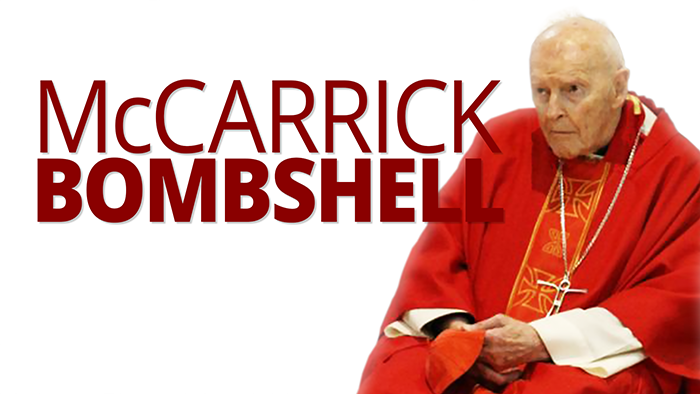 McCarrick Bombshell
It's so much deeper than anyone knows.