So there is something floating around in the Catholic ether that needs to be addressed straight up and head on. It is the credibility of Catholic "news" outfits that have close associations with the Church establishment, and those associations can be either a direct or indirect financial relationship.

Some of them are directly dependent on the bishops, like CNS — Catholic News Service — which is the bishops' "news" outfit — and we use the term "news" loosely.

Then there are others — many others in fact — that are closely related financially and are dependent on keeping good relations with bishops like CNA — Catholic News Agency, EWTN, Relevant Radio even Bill Donahue at the Catholic League to a degree because he needs the approval of the Establishment to keep appearing as though everything he says is trustworthy — like all of them — so he can keep getting paid.

These outfits cannot afford to fall out of favor with the bishops because they would suffer tremendously in the areas of advertising or exposure or having the "seal of approval" or getting access to various Church events and personalities and so forth.

In short, they are beholden to the Establishment and therefore cannot take too great a chance of running afoul of it.

This is also true of multiple Catholic radio outfits that are essentially EWTN affiliates — they are allowed to air EWTN programming for free, but must tow the party line because if they don't, then the programming is taken away and now they are high and dry with not much to broadcast.

Then there are outfits like Crux — which is partially funded by the Knights of Columbus — which tries to present itself as just "reporting" the facts, but always seems to slip in that slightly liberal/heterodox viewpoint, either directly, indirectly or by insinuation. Crux also cannot be seen to be "outside the establishment" because, well, there's the question of where would the funding come from then.

At the end of the day, there is a monolithic structure of Catholic "news" outfits, that in the end, aren't really "news." And here's the rule of thumb, if they are on good terms with the Establishment, watch out.

They "report" to you only so much, there is a line they will not cross because, since they are, to varying degrees, dependent on the bishops, that would be professional suicide, and well, everyone likes a paycheck.

If you consider some of the following points, this will become more clear that they cannot be relied upon to bring you the entire truth in complete context. And I'm sorry, but having spent my entire professional career in secular media as a professional. Truth and context are everything.

Right now, many of these outfits are more PR outfits for the bishops than "news" outlets — for example, the very recent case of Fr. Paul Kalchik and Cardinal Cupich's wicked treatment of him.

This story has been either misreported, sloppily reported, underreported, incompletely reported or not reported at all across the entire spectrum of Catholic "news" outlets. Not one of the above-mentioned outlets, as well as the others, took the time to fully investigate this whole sordid affair.

Why? Because it would bring down the ire of Cdl. Cupich and that's a buzzsaw they don't want to run into. So they have been content to simply repeat the lies of the archdiocese of Chicago that Fr. Kalchik left willingly for pastoral care. That's a load of non-truth and they know it — or they should know it.

This story serves as a perfect example of their complicity in simply not wanting to tick off the Establishment, so they do not give you the whole truth in context.

It's for that reason, which boils down to trustworthiness, that both ABC and NBC are in contact with us here at Church Militant on this story — asking for background, etc. and permission to use our video and reports.

Secular media, for all their many faults — and they are myriad — are not going to the Establishment Catholic "news" agencies because there’s nothing to discover there. They are essentially press release readers. They are compromised — period. And that makes them untrustworthy.

If they were truly free and independent and cared about reporting the whole truth in context, then why have they lagged behind so poorly on the story of the homosexual crisis in the priesthood and episcopate? Because if they came out and reported like Church Militant does — truthfully and in context — they would be immediately sidelined and hung out to dry and treated like we have been for years.

They have wedded themselves to the Establishment, and now they are handcuffed — and that's fine. That's a choice they have made and continue to affirm. They will not investigate the evil in the ranks of the clergy even though they know it exists.

When they report it, it will never be from a lead position, but always lagging from behind and with an apologetic tone. It has to be that way. That has to be their choice if they want to stay in business.

Again, that's fine, just don't turn to them expecting the truth in context. There has never been a time in the Church when there has been a greater need for independent Catholic media free of the financial and relationship constraints imposed by the Establishment.

For decades, a huge portion of bishops have flat out lied about dozens of issues, sex abuse, catechesis, liturgy, tradition — you name it.

Many of them have waged a war against the underpinnings of the Faith, some of that has resulted in rampant homosexual activity in the clergy which has only come to be reported on by secular outfits.

Where were these Catholic "journalists" who have the inside track on such knowledge when children and seminarians were being raped by homosexual clergy, for decades? Where were they when the faith life of the Church was being completely gutted by malevolent men in bishops' robes?

They were nowhere to be found. They were off collecting their paychecks and reading and printing diocesan press releases telling you everything in the Church is good. They couldn't conduct a hard-hitting interview with a prelate if their professional lives depended on it, which is why the bishops always scurry off to them for "interviews."

This is not honest. It's not honest, and it's not trustworthy. In fact, it's lying by omission. They are holding themselves out as reliable "news" sources when they are not.

They should not be listened to or trusted. If you want to know what the "party line" is, then read them or listen to them. But if you want to know the truth in its context, then go to the independent Catholic media sources, who have no fear of reporting what we know, which is why so many bishops can't stand us.

The time for this Catholic "news" charade has come to an end. They have enabled this filth in the Church because they would not report the truth in context.

How is any of this different in principle from CNN being fake news? It isn't. Very few in Catholic "news" circles have any actual real-world professional experience in news — very few.

They are easily taken in by their bosses and senior management who follow the directives of the various bishops — bishops who have lost complete credibility when it comes to being truthful — and this gets communicated to their media outlets, and they are their media outlets, but they are not "journalists." They don't report news.

They reprint press releases from the bishops and grab a sound bite or two from some other Catholic Establishment type and call it a day, and you are the one who is not served by all this.

So far, two network affiliates have contacted us on the Fr. Kalchik story and asked for help in accurately reporting it. Needless to say, not one Catholic "news" outfit has called us — not one, and they won't. And that's because they have their orders from on high to make sure that Church Militant is never treated as a reliable source, because to do so would validate everything we report.

This entire game is a sham — it's dishonest. But, as always happens, the truth is coming out anyway — the whole truth, in context. Too bad so many Catholic "news" outfits will find themselves on the untruthful and inaccurate side of that final picture.

The final difference is this: Church Militant cares about the truth of the Catholic faith so that souls will be saved. The other guys care about preserving the status-quo Establishment. 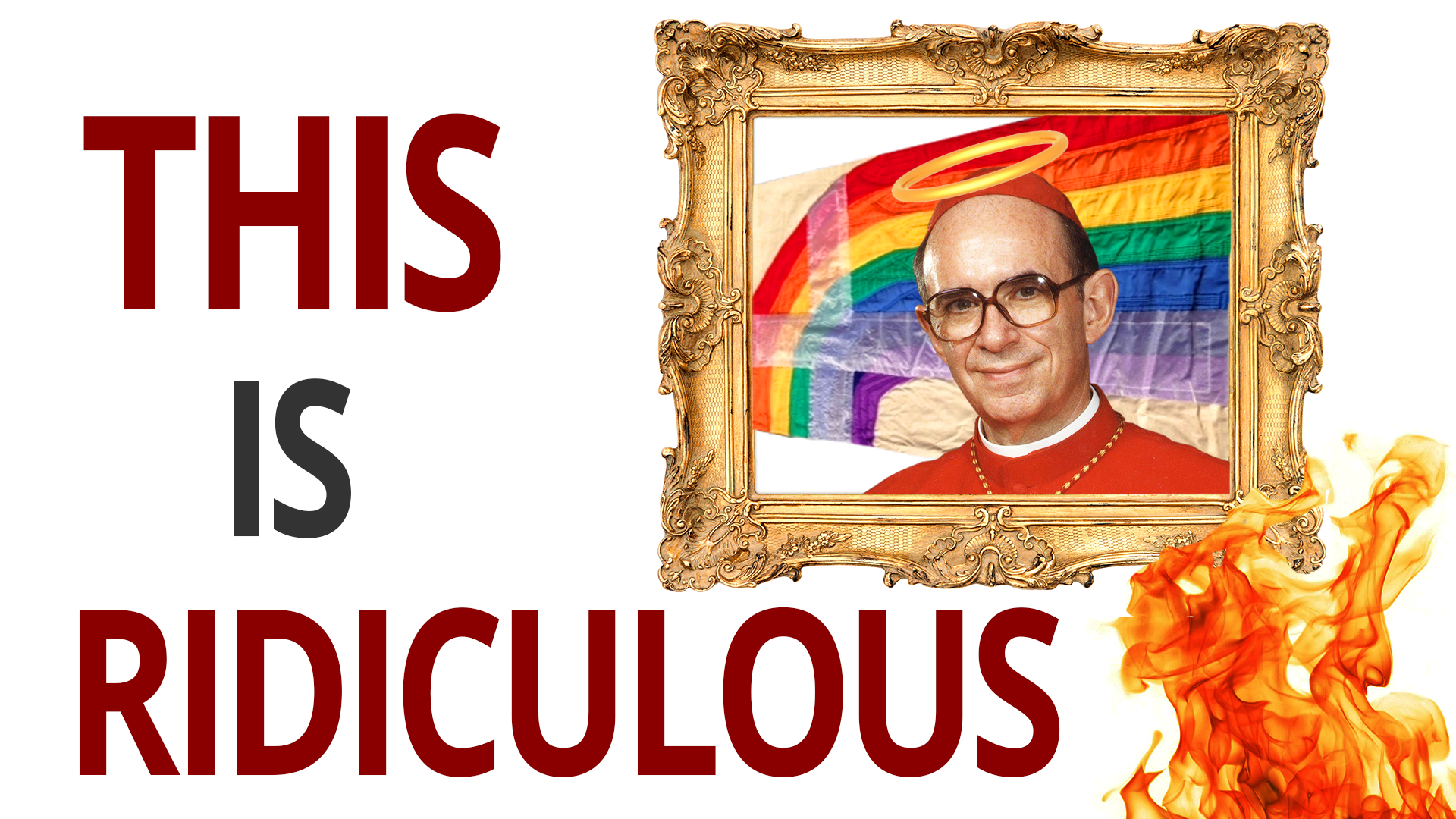 This Is Ridiculous
And it's gotta end.