May 6, 2019  0
Podcast Available for Premium Subscribers

Every now and then — likely unintentionally — the secular media actually gets something right.

Such is the case with a recent report which we've attached a link to in case you want to read the whole thing for yourself.

It's from a very established statewide Michigan news outfit, and it focuses on the severe drop-off among Catholics in Michigan and the archdiocese of Detroit in particular. And for the record, this is the story in virtually every diocese in the country.

First, as background, understand that the archdiocese of Detroit was ground zero for the implosion that happened to the U.S. Church immediately following Vatican II.

The then-archbishop, Cdl. John Dearden, was a liberal disaster who used Detroit as a petri dish for the destruction of the Faith with liturgical abuses, ordaining gay men and so forth.

Dearden also was instrumental in setting up and running the national bishops' conference, and from that position, he exported his liturgical and faith destruction across the entire U.S. Church from the mid-1960s and onward.

His work was carried on by homosexualist Joseph Bernardin who Dearden raised from obscurity to be his successor in destroying the Church after he had left the scene.

So with that background, now let's turn to the article.

It looks at the devastating drop in the practice of the Faith here in Detroit, focusing especially on the years from 2000–2018. What's noteworthy about those years is that the first nine — from 2000–2009 — are when Cdl. Adam Maida was archbishop here.

Under Vigneron's watch, practically nothing has changed. The same Church of Nice garbage has continued to flow freely, and the numbers across the board have continued to plummet.

Finally, after reigning over and contributing to the collapse of the Faith here, a couple years ago, Vigneron produced what he classed as a work of the Holy Spirit called "Unleash the Gospel."

It wasn't really a work of the Holy Spirit — insiders tell Church Militant it was ghostwritten by seminary instructor Mary Healy — and is little else than the recycled same Church of Nice garbage which brought the Detroit archdiocese to its knees; in short, Cdl. Dearden would like this plan.

The article from MLive does a masterful job of drawing out that the entire plan centers around drawing people back to the Faith by avoiding "truth bombs," the hard teachings, usually about sexual morality.

Here's the relevant line, quoting directly from "Unleash the Gospel": "In addition, Vigneron has promised 'practical help' to ensure priests provide empathetic pastoral care and present homilies 'meeting people where they are at and avoiding "truth bombs" that will only turn them away.'"

And there you have it, ladies and gentlemen, in black and white, avoid the hard truths in order to get people back in Mass. How is this any different than what's been going on here for the past half-century?

If Vigneron thinks people have left the Church in this archdiocese because they have been hearing "truth bombs" from the pulpit, then he must be somehow partaking in Michigan's recently legalized pot stores.

This is one of the most gay-friendly dioceses you will find. It's home to the oldest gay Mass in the world.

Even the ghostwriter herself, Mary Healy, said Vigneron won't do anything about the gay stuff here because he's scared of what the gay priests will do in response.

So his plan — or her plan, depending on how you look at it — is more guitars, less truth and lots more hospitality as the aging hippie population is drawn back into the "never give offense" Church.

Perfect, what could possibly go wrong? What insight, what brilliance, what forward-thinking — let's just do more, much more, of what we've been doing since before the Vietnam War and it will all pay off.

We're going to continue to focus on this theme for a few more days, using the Detroit disaster as a backdrop because, one, we are located here and know an awful lot of the inner workings; and two, Detroit is emblematic of what has happened in the Church all over the country, which is fitting because it really all started here.

There's even been speculation that Dearden himself may have been one of the Communist plants back in the day who infiltrated the Church to destroy Her as Joseph Stalin ordered.

Having been born in 1907 and ordained in 1932, the timing certainly works out, but that will probably be impossible to determine really one way or the other.

What can safely be said is if he wasn't one of the Communist infiltrators, he sure could easily pass for one.

All of this rot has got to come out into the open and be exposed. Vigneron's ridiculous plan is little else than the warmed-over poor formation he received in seminary in the early 1970s when the madness had already seized control; much more throughout the week in our continuing effort to help Catholics understand what went wrong so that the mistakes will not be repeated. 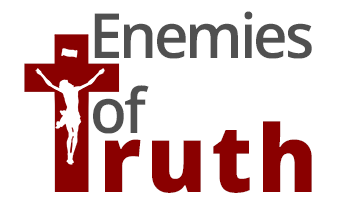 Enemies of Truth
We must call out their lies.