The two most important qualities.

There are two qualities that any faithful Catholic must possess in superabundance these days: truthfulness and being unafraid.

These qualities must permeate every corner of Catholic life, including Catholic media coverage of the current condition of the Church.

When Pilate looked into the eyes of Our Lord and asked the timeless question of Truth Himself — "What is Truth"? — that became an archetype, a pattern of human response to God.

No Catholic can truly be Catholic who is not a lover of truth, both as a concept in itself as well as the Person of Truth.

Loving truth removes fear, makes one unafraid. The greater the love of truth, the less fear a person has; truthful and unafraid, the marks of a lively faith in the 21st century.

So, as things begin to heat up in preparation for the upcoming Amazon Synod in Rome, which Church Militant will be covering from the Eternal City, do not take your eye off the ball.

The main thrust of what's going on here is a further degradation of belief in the Real Presence.

All salvation comes through the Church because that is what the Son of God established, making His own mystical body the means of access to Him, and without access to Him, no one comes to the Father.

So, to try and incorporate into Catholicism aspects of other religions, to insist that salvation is possible by more than one means is not only wrong but blasphemous and diabolical.

Salvation through human means, under our own power, was, in fact, the temptation presented to our first parents — "You shall be like gods."

That line was a perversion of a supernatural reality that Satan himself had not yet comprehended as he spoke it.

The Holy Trinity has indeed provided a way for us to become like, not just gods in general, but God Himself, to be so closely incorporated into the divine life that we share in Him, not just spiritually but physically as well.

We can have the very DNA of God racing through our veins, His flesh joined to ours — actually, physically.

Not even the serpent had envisioned a scenario such as that, that the Infinite Spirit would unfold a plan to share life with finite matter, elevating it to a supernatural immortality.

Yet with God, all things are possible, as Our Lord told Peter and the Apostles as they pondered the very meaning of existence and the impossibility of achieving it — on their own that is.

We need God, not just in some spiritual sense, but since we are body as well as soul, we, of all me, must be saved and, therefore, have access to that salvation.

But if the body participates in sin, which all of ours surely do, then it too must be purified, just as the soul needs to be purified.

During our earthly lives, the soul which is eventually saved is in the process of purification, of sanctification. So why not also the body? After all, human beings are not just souls, we are material realities as well, beings of flesh.

For this reason, the Son of God pre-ordered, pre-ordained that since the fall of humanity involved not just our spirits, but also our bodies, that our bodies also would have access to His divine life.

So enter the reality of Holy Communion, a common holy union of both body as well as soul with the Divine.

And the ultimate goal of that holy common union is to prepare us in the body as well as the soul for the resurrection of the last day.

For this reason, to replant the flag of divine love into the minds and hearts of Catholics, Church Militant produced our documentary The Holy Eucharist: God's Lamb.

The threats to the Faith from within the Church must be expressed fully, in all truth, unafraid of the consequences.

What is being fought is the lie from the serpent in the garden — nothing less.

And one day, every single Catholic, to whom much has been given, will face the terrible question about how much we did or did not love truth, how unafraid we were to love.

All Catholics entertaining any hope of salvation must realize the hour at hand — the hour of truth and being unafraid.

If you would like to order your copy of our documentary, please click on the provided link. 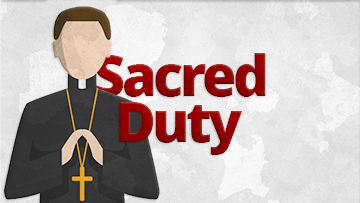