Two Women and a Priest

Detroit archbishop Allen Vigneron needs to call an end to the fraudulent case against Fr. Eduard Perrone and do it immediately. Last July, Perrone was abruptly removed from his parish here in Detroit — Assumption Grotto — and parishioners were told it was being done because he faced charges of sexual abuse.

Those charges, it turns out, were a pack of lies, ginned up by Vigneron's point man — a vicious, vindictive man, Msgr. Michael Bugarin — who has no care for Perrone's parishioners. Given how he spread the lies about Fr. Perrone, one might wonder if he actually delighted in the move.

He gave an interview to the Associated Press, which then went on to carry the story so extensively that it got picked up around the world, even making the ticker on Fox News in a lengthy display. But something is devilishly wrong with Bugarin, not to mention Vigneron, who allows this miscarriage to persist. Bugarin is pastor at St. Joan of Arc in the archdiocese, home to not only EWTN's Teresa Tomeo but another woman, intimate to the scandal.

For the record, even in the face of all the facts about the lies and irregularities about this case, Tomeo continues to defend Bugarin. She has a lucrative deal with EWTN, and gets loads of speaking gigs here in the archdiocese, not to mention that her husband is a deacon. So when it comes to insiders who have every reason to defend the establishment in their own self-interest, Tomeo is as crooked and self-promoting as they come.

In fact, the whole EWTN/Catholic News Agency apparatus defends the bishops and sucks up to them regardless of what evil comes to the surface. In what has clearly been shown by Church Militant to be not just lies, but an orchestrated campaign of cover-up and scandal by Vigneron and Bugarin in the Fr. Perrone case, far from exposing the truth, the likes of CNA and Tomeo have thrown their lot in with the archdiocese.

It took nearly a year for EWTN to actually cover the story, and when it did, it fell far short of doing any investigating of the facts. Likewise, Tomeo took to social media when questions arose about her silence regarding Bugarin, who is her pastor. She has a big mouth. Why wasn't she using it to defend an innocent priest?

In addition to never wanting to rock the boat (lest it impact her bank account and prestige at Church of Nice headquarters), perhaps it was also because a fellow parishioner was also active in the smear campaign against Fr. Perrone.

That woman, Nancy LePage, lost an arbitration hearing last week by a unanimous vote of a three-judge panel and has been ordered to pay $125,000 in damages. She's being sued by Fr. Perrone for defamation because she made up charges against Fr. Perrone and was assisted in that effort by Msgr. Bugarin.

In fact, she not only lied about Fr. Perrone sexually assaulting a former altar boy decades ago, she also perjured herself during testimony, at first saying — under oath — she was assisting Bugarin in the questioning of the John Doe just in a private capacity. But when she got sued, she switched that around and said she is immune from being sued because of her status as a Macomb County deputy.

LePage has a track record of trying to falsify testimony and change what witnesses tell her.

So which is it Nancy? As a sad refresher for those of you who know the story, or a brief intro for those who don't, Church Militant became aware of this story weeks before it became public in July 2019, through a source not related to the investigation. We discovered the actual identity of John Doe — a name that we have never released and have no intentions of ever releasing. He's been victimized by Vigneron and the establishment far too much already.

During the course of our own behind-the-scenes hunting around, we discovered that Bugarin —who also doubled as John Doe's spiritual director (a shocking conflict of interest since he is also Vigneron's hit man in this case) — and LePage had completely fabricated a charge of sodomy against Perrone and tried to manipulate John Doe into saying that.

When he steadfastly refused because he said he (his words) could not "vividly recall" any abuse happening, that didn't deter Bugarin and LePage: They just wrote it into the initial report used to remove Perrone from office anyway. Church Militant learned of their falsified report to the archdiocese because, remember, we know who John Doe really is, and sources close to him tell us it was one of our early reports about him allegedly saying he was raped by Fr. Perrone that had him call Bugarin and say that it was absolutely false — that it never happened.

LePage, however (remember, a parishioner of Bugarin's), has a track record of trying to falsify testimony and change what witnesses tell her. As a quick aside, when word of all this spreads through the legal community in Macomb County, every single defense attorney who has ever had LePage involved in an investigation against their clients will rightfully demand their cases all be reopened.

The woman lies about what witnesses and supposed victims tell her. Heck, it's so bad that when she loses her job at the Sheriff's office — which she should, not to mention face criminal charges for perjury — she should get hired by CNN. LePage even tried to fabricate further testimony about Perrone — meaning tried to drum up more lies — by doing the same thing she did to John Doe.

She called up former Perrone altar boy James Fortenberry and tried to get him to say Perrone had sexually assaulted him, something he told her never happened — quite the contrary, in fact. Perrone was a model priest. She so misrepresented what he told her, painting Perrone as a molester, that Fortenberry actually got in his car and drove up here to Detroit from Alabama and gave an on-camera interview to Church Militant, so incensed was he at what the "should-be-fired" Macomb County deputy LePage had lied about in his regard.

So, circling back — last Friday, a three-member panel (objective lawyers who knew nothing about the case) ruled unanimously that LePage had defamed Perrone by lying about John Doe. The panel did not get into it because it wasn't part of the matter immediately at hand, but Bugarin and Vigneron are also parties to this filth.

Bugarin was present when his friend, LePage, was manipulating John Doe, trying to coerce false accusations out of him. It was Bugarin who composed and handed in the report to the archdiocese of Detroit, knowingly inserting the false charge against Fr. Perrone — a charge he had helped create — which a three-member panel unanimously ruled was defamatory against Fr. Perrone.

But back at St. Joan of Arc, Bugarin is allowed by Vigneron to continue as pastor, backed up by the silence of the Church of Nice apparatus, the face of which is EWTN's Teresa Tomeo, who is perfectly content to publicly defend Bugarin so she doesn't upset her cash cow with the establishment.

What good does it do having a voice when you won't raise it to defend the innocent?

What good does it do to have a voice when you won't raise it to defend the innocent? So why is Abp. Vigneron on board with this (which he clearly is)? Why does he have Bugarin continuing this pack of lies against a very good priest? Is it related to Fr. Perrone's outing of the homosexual clergy in Detroit?

Why is EWTN's Detroit face, Teresa Tomeo, so unmoved by the sufferings and persecution of a good priest (and publicly defending a bad one)? Many faithful Catholics are constantly asking, "What can I do, what can I do?" Many times that's a difficult proposition because Church cases are so covered up and made secret by crooked bishops. But in this case, because it has made it into the public record and secular courts, now you can do something.

We've provided a few links with all the following contact information. First, reach out to the Macomb County Sheriff's Office and ask Sheriff Anthony Wickersham to fire LePage. She is a danger to the community, deliberately falsifying testimony.

Likewise, her case should be investigated and, if possible, referred for criminal indictment. That an officer of the court would conspire with a high-ranking priest to ruin another priest is criminal. And speaking of the priest, please reach out to the archdiocese of Detroit and let Abp. Vigneron know that Msgr. Bugarin needs to be sidelined immediately.

He certainly isn't fit to lead a parish, and even a question of his very priesthood should be raised. And lastly, reach out to the papal nuncio in Washington, D.C., and file a report against Abp. Allen Vigneron. For any bishop — especially the vice president of the U.S. bishops' conference — to allow this scandal to continue is reprehensible. The buck stops with Vigneron. He is the one ultimately responsible for letting this continue. He allowed international media reports to defame one of his few good priests, knowing it was all based on a lie.

Lots of times, we can't do something directly. This time, we can. And while you're at it, call EWTN telling them to distance themselves from Teresa Tomeo for her complicity in defending Bugarin (so she can keep her own nest feathered).

What Church Militant has been reporting for years is true. The rot and evil in the Church is extremely far-reaching and is the norm. The entire system is geared to protect itself; it cares nothing for the truth. It cares about money, self-interest, denying its homosexual clergy and covering up and sex abuse. Here are two women, a lying priest and a disgraceful bishop you can do something about this time. 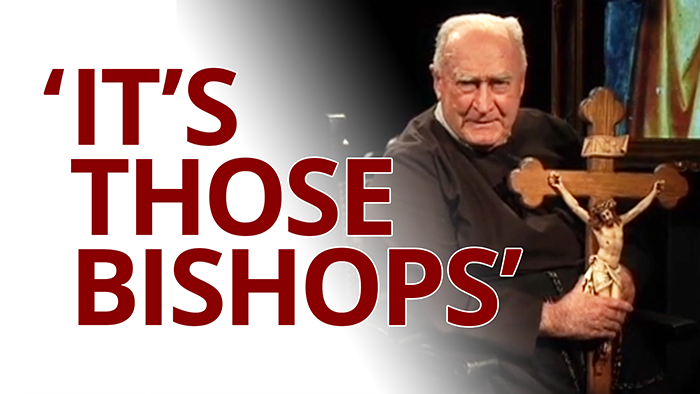 ‘It’s Those Bishops’
They are not fathers. They are abusers.