Unchecked and Out of Control

End the careerism, the politics, the clericalism.

I'm Michael Voris coming to you from the Vatican, where the month-long Synod on the Youth is finally wrapped up — complete with its drama and secrecy.

The drama and controversy before and during the synod was on the specific question about the use of the acronym "LGBT" as we have reported to you. It was viewed as a sort of victory for orthodoxy and defeat for the homosexual current here in Rome and elsewhere if it did not directly appear in the final document. It does not.

But the victory on that single point is more of a stalemate than a victory because, as Diane Montagna summed up well in her reporting with the use of the word "smuggled," the homo-current here in Rome and at the synod specifically have achieved something of their goal if not everything.

The underlying fundamentals of the homo-current are still present in the document, but not the specific LGBT that was present in the preparatory document.

On this score then, the synod can be viewed as both a small setback for the homo-lobby here at the Vatican, as well as an advancing of the agenda by means of stealth. So a stalemate of sorts, with an advantage going to the homosexualist cardinals and archbishops and their allies all over the Church.

Once again the question arises, especially in the face of the third testimony from Abp. Viganò released right in the middle of the synod and calling on other members of the hierarchy who know the truth of all this homosexual madness in the Church, why are you not stepping forward in defense of the truth?

Why are you not denouncing these manipulations of the Faith; these distortions and lies and falsehoods?

Where are you in defending the sheep from these homosexual predator wolves disguised as bishops?

Earlier this week, Cdl. Burke had an interview with Polish television where he flat out said that of course homosexuality among the clergy is the source of the rot — echoing Viganò's assessment.

Here and there throughout the Church, a bishop comes forward and says the truth of this, but more deny it like Cupich and McElroy, but most sit on the sidelines with their mouths shut, keeping themselves out of the line of fire, protecting their own little power base.

It will not go well for either of those groups at their particular judgments when the Judge passes sentence on them that they did not do their duty and allowed the Church to fall into further disrepair. And they shouldn't kid themselves or drown out their consciences that that will exactly be the judgment passed on them.

When it came time — when the moment arrived to protect the sheep and defend Christ — they fled, practically all of them fled. As an aside, in just two weeks, the American bishops gather in Baltimore, and thousands of faithful Catholics will be there to remind them of their duty to be bishops and die if necessary for the sheep.

If you want to know more about the Silence Stops Now rally and the plans as they stand now — just go to thebishopsknew.com for all the details.

We wonder, how many will even physically get out of their comfortable seats at the Marriott and walk the 100 feet to the sheep there praying for them just outside in the cold?

But back here to Rome and the Church Universal, there is no doubt that the men in charge today, a large portion of them are homosexual — active or passive makes no difference because they are all and each bound up in the web of this evil, directly or indirectly, as is the establishment Catholic media that covers for them by not telling you the entire truth that they all know.

The men in charge — the bishops — are unchecked and out of control. The Church, in their minds, is their own personal property to do with as they will, and we peasant Catholics are just an annoyance that need to be tolerated so money can be gotten from us for the day to day costs of keeping up appearances.

All over the world, the facade is being seen through, and yet there they stand, absolutely resolute in their conviction to destroy the Faith — the Faith which they loathe because they have no supernatural faith.

And those among them who still might have some vestige of supernatural faith but remain quiet are cowards, and without even consciously realizing it, also losing their supernatural faith as well because faith without works is dead.

Those cowardly bishops have a duty — an obligation, a sacred command — to step up and tell the truth and bring an orthodox counter-revolution to the inner sanctuary of the Church.

Wicked prelates like Blase Cupich have not the slightest qualms about standing up and declaring that revolution has come to the Church, a "paradigm shift," — a full-blown revolution, and yet these cowards and wimps who know this refuse to step up and say what needs to be said and bring the counter-revolution.

How ridiculous — really, when you think of it — how ridiculous is it that lay people with nothing to gain are the ones who have to be doing this work. That thousands of lay Catholics have to go to Baltimore as a visible witness to the cowardice of the leaders and tell them all to be men — it's insane.

They've all been lulled into a deep spiritual coma by listening to the idiocy of various leaders among them prattling on about a reasonable hope that all men are saved. That poison has contributed mightily to all this.

What has become public that still doesn't shake these men from their coma?

McCarrick, Wuerl, hundreds of revelations about seminarians being assaulted, a South American gay seminarian pipeline in existence for decades, rectors being pulled once all of it becomes public, cardinals bald-face lying about what they know, 15 state-level investigations, two separate federal investigations with a much larger one looming according to Church Militant sources in D.C., three testimonies from a former papal ambassador now fully corroborated, a synod used and abused to advance further erosion of the faith — what else in Hades has to happen to shake the cowardly bishops, particularly in America, from their Rip Van Winkle-like comas?

Do they not comprehend that their personal eternal lives are at stake at this very moment, as this great drama plays out in the Church and they are called to act?

End the careerism, the politics, the clericalism which is used to protect this monstrous evil, as both Viganò and Burke and a few others have truthfully stated. No Catholic — most especially bishops — gets to be cowards in this instant of great torment in the life of the Church.

Think what has come forward in just these few short months: "Nighty-Night, baby," "We have more important things to do than going down this rabbit hole," "I was shocked," "We bishops should investigate ourselves," "The sexual abuse has nothing to do with homosexuality" — all of those from American Cardinals — and of course the biggest whopper of them all: "It's not a massive, massive crisis."

What, pray tell then, does a "massive, massive crisis" look like if not this?

And for the official record, it's massive enough to have cost the cardinal who uttered that idiocy his job, however politically covered he is for the moment.

How massive is it? Well, massive enough for 60 Minutes to zero in on one case in particular that Church Militant was the first to expose — that case being the decades-long homosexual corruption infecting the diocese of Buffalo.

It was Church Militant who first broke this story, and now 60 Minutes has spotlighted it, the rector of the seminary there has had to step down amid charges of homosexual predation, the mysterious case of the whistleblower priest turning up dead who no one believes killed himself, a history of sexual assault accusations essentially ignored by a string of bishops, a federal investigation ramping up that will not end well for the homosexual crowd running the place and what the increasingly untenable position of the current bishop, Richard Malone, who stubbornly refuses to admit any wrong-doing or take any responsibility.

But Buffalo is just one diocese. This evil garbage goes on in practically every diocese in the United States — with rare exception.

And they can blather on in their emasculated, limp-wristed manner about how such comments are "unhelpful" and "divisive," and their lackeys in their media outlets and communications departments can repeat their propaganda for them all they want, the fact it's all true — a point that never gets brought up.

The first, a eucharistic procession which took place on Saturday morning through the streets of Rome as part of the annual Summorum Pontificum celebration, which began in center Rome, crossed over the famous Ponte Sant'Angelo and moved up the Via Della Conciliazione into St. Peter's Square with onlookers taking in the whole scene, and then into St. Peter's Basilica itself for a beautiful Mass — all of this a display of authentic Catholicism and its self understanding that the world is in need of conversion and saving.

And then there was this: On the Friday night before Saturday's closing of the synod, a very disturbing light show, projected onto the facade of Santa Maria Minerva where the relics and remains of St. Catherine of Siena are enshrined. The weird display, bordering on something demonic looking, bespeaks something far greater than a light show. It is the very image of Catholicism — in deep, deep contrast to the eucharistic procession — that the homoheretics crowd wants the world to see when it looks upon the Church — a gravely distorted view of truth and goodness and beauty.

Simply put, one view is truth and divine; the other is diabolical. That is the best visual sum of the current state of affairs we could ever present on the massive, massive crisis — two views of the Church, one shrouded in darkness, the other bathed in spectacular light.

Every Catholic has to actively choose to step into the light — most especially the bishops. 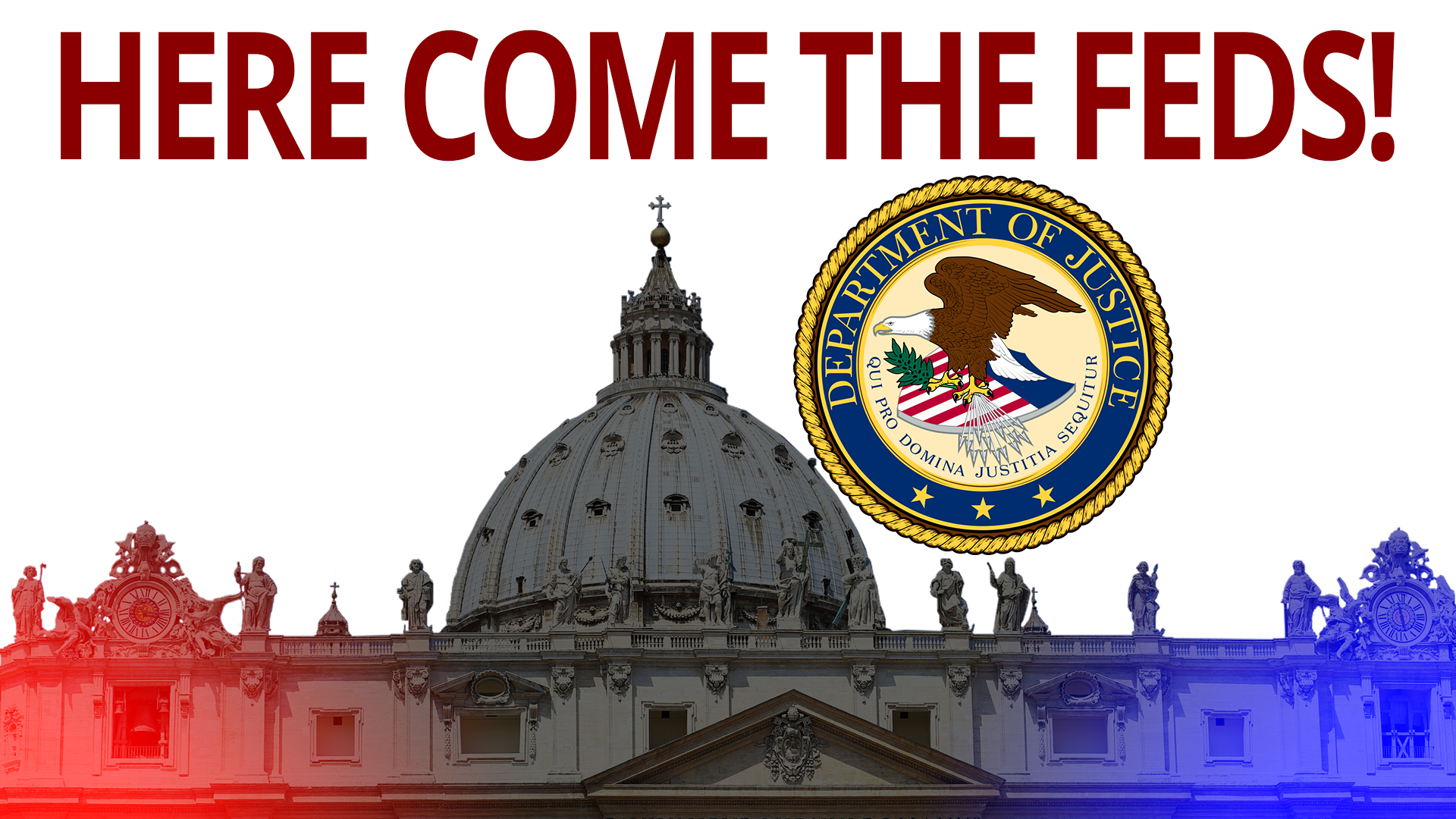 Here Come the Feds!
Game over, Your Excellencies.