Everything must be revealed.

I'm Michael Voris coming to you from Rome in the aftermath of a phony summit which accomplished no good of note — but did manage to deflect from the real evil.

To show how unimportant this was, and how it was just a giant PR stunt meant to make the Pope and his homosexualist henchmen appear to be doing something, recall this singular fact: That despite the prior knowledge that all these men had of Theodore McCarrick's evil, they never felt the least bit of interest in having any kind of summit about sexual predation.

It was only because the news broke about McCarrick that anything was done, meaning, of course, that if McCarrick's altar boy victim of decades ago had not come forward more than a year ago, it would be just business as usual here in Rome.

All of this means that the McCarrick case cannot be swept away, and everyone feels as if this summit closes a sad chapter — oh no, definitely not. The recent defrocking of Theodore McCarrick is a case not closed by any stretch of the imagination.

While many in Rome want to truly put this to rest and hope that faithful Catholics forget about the massive damage done to Holy Mother Church by this former prince of the Church, the truth is he was a prince of Satan working to destroy the Church from within.

He still clings to his innocence without making one — not even one — statement of remorse or apology or admittance of his crimes. For the sake of review, he was a homosexual priest, bishop, archbishop and cardinal preying on both boys and young men for years.

He spent a year of his young life in what appears to be a Swiss training center established by the Soviets. He established recruiting teams within his dioceses so that selected priests would be sent abroad in order to attract young seminarians to his diocese and then later would entice them to have sex with him.

He would troll through seminaries looking for seminarians to add them to his harem of male lovers in an effort to satisfy his own distorted and warped sexual desires. There was, of course, the infamous Jersey Shore beach house where he and all of his homosexual clerical friends would gather with seminarians for their sex parties on a regular basis.

He would also provide his beach house to other homosexual priest and bishop friends so they too could use his den of iniquity. He promoted many homosexual priests to positions of influence within the U.S. Church.

He actively promoted and lobbied his fellow bishops and cardinals — both in the United States and in Rome — in appointing a large number of auxiliary bishops to become shepherds in many other U.S. dioceses. And many of these former auxiliary bishops were in fact under McCarrick at one time or another.

In short, if you were one of "McCarrick's boys," you could be assured of a happy career in the Church guaranteed and supported by McCarrick. There is the millions of dollars raised and moved around by McCarrick all in an effort to buy influence, power and prestige, making him completely "untouchable" within the Church. So why is this a case not closed?

Because there is a mountain of information we simply do not know. We just don't know the full extent of all of his evil endeavors. In order to look at this massive problem which needs to be cleaned up in the Church, you have to approach this with the greatest of objectivity and prayer.

McCarrick's treachery needs to be treated the way you would approach any investigation into a major agent or spy. Essentially the McCarrick case needs to be looked at from a counterintelligence perspective.

This is a person who infiltrated the Church — most likely by Communists — spreading lies and deceit, promoting those he selected into positions of power. While all the time he continued to gain more and more influence and pulling as many levers of control that he could grab onto for his own selfish benefit. He continued to live a double life, manipulating any and all who came within his orbit.

We know that with all the damage which has been done, there is much more which lies below the surface and has yet to be discovered. Like an iceberg, we only see the tip of McCarrick's evil deeds. Most are still below the water-line, still hidden in the darkness.

We simply need to know the full extent of the damage done. To do this requires a tremendous level of effort by investigators who will not quit and who are determined to find out all that there is to find. This is a lifetime investigation which needs to happen into the whole history of McCarrick because he lived a lifetime of doing evil in the Church.

All the old files on McCarrick need to be reopened and reviewed — his old high school records to explain where he was for a missing 18 months during high school. Why was he expelled from one New York Catholic high school?

What was he doing in St. Gallen, Switzerland for a year after eventually graduating from high school? We need to see his seminary files, understand his relationship to New York Cdl. Spellman who ordained him, his diocesan files, all his correspondence, what he was doing in Puerto Rico after ordination at the island university.

We need to examine very closely who he chose to advance in the Church and why, who he supported and/or covered for as a bishop, archbishop or cardinal. Those very clerics are still at this very moment in their positions of power and influence owing directly to him — men like Blase Cupich, Kevin Farrell and Joseph Tobin.

Although gone from the scene officially, Donald Wuerl needs to be looked at extremely closely as well because he covered for McCarrick for years, finally getting busted for his lies in the secular press.

Like any major counterintelligence investigation into a spy, McCarrick's activities rank among the worst of any spy in human history, and this is not an exaggeration. Practically no spy in history has flown under the radar for 50 years and caused this level of damage.

To be a true "agent provocateur" in the Church, you have to be a real master manipulator, a great deceiver and a consummate liar.

Spying is considered to be the world's second oldest profession, and McCarrick did it well, with the help from the father of lies, Satan. But let's not forget that there are many people in positions of power within the Church in the United States and in Rome who do not want McCarrick's deeds to become fully known because they would be exposed as his proteges and need to be dismissed from the clerical state as well.

So the only course of action these "McCarrick boys" have is to continue lying about the truth, above all else and keep the cover-up and deflections going. That's what this summit the past few days has been about: covering for McCarrick's allies.

They will continue to lie about knowing anything and hold fast to the line that all the rot in the Church has nothing to do with priests, bishops or cardinals being homosexual. It is they who want the case closed on McCarrick. And this is why this cannot happen. As long as the current corrupt homosexual regime reigns in Rome, this will never be done by the Church.

It's why wealthy lay Catholics must step up and pony up money for assorted private investigations. Private eyes must be hired, research teams involved, financial forensics experts must be employed — not to get revenge on McCarrick himself, but to prevent the McCarrick evil from spreading any further in the very agents he promoted and advanced to carry on his evil long after he was gone from the scene.

Now is the time for the light to truly shine into the darkness against every aspect of McCarrick's wicked life. And no amount of phony cover-up summits or synods should distract from this overarching truth. The entire case file of the notorious Uncle Ted must now be opened.

Ubi est tenebrae fiat lux — where there is darkness, let there be light. 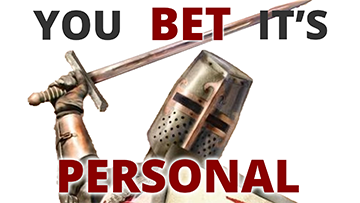 You Bet It’s Personal
How could it be otherwise?