We frequently report to you various underhanded tactics and sneaky tricks pulled by various bishops and clergy to stamp out any resistance of faithful Catholics to oppose their liberalization of the Church. Most of the time, we can't be very specific because if we were specific, various clergy or even laity would suffer repercussions for telling us details. However, we now have a case that we can be very specific about because the case was fumbled by Church officials, and Church Militant became aware of the details as part of the record. It involves dirty tricks by Bp. Kevin Vann and his cohorts in the diocese of Orange, California, involving bullying and intimidation tactics and hush money, and Church Militant has first-hand information about all this because well, we were the object of Bp. Vann's sneaky tactics.

Here are the details. Back in August, Church Militant supporters in the diocese of Orange in Southern California invited Church Militant to speak at a conference this coming weekend. They signed a contract with St. John Maron Church and parish — a Maronite parish in Orange. Since it is an Eastern Rite parish and not a Latin Rite parish, Bp. Vann has no authority over it — different rite.

Church Militant supporters advertised this weekend's talk for months far and wide through posters and flyers and social media. We've had it on our site for a number of weeks. This talk was no secret. This past Sunday, Super Bowl Sunday, the organizers suddenly get a call at 2 p.m. in the afternoon saying there's a problem, and an emergency meeting had to be held at the parish hall. In that meeting, the pastor of the parish tried to intimidate the sponsors, saying there had been a mistake in the negotiated price and a much more exorbitant price would have to be paid to hold the talk on the grounds. Understandably, the sponsors balked, and the pastor backed down.

A short while later, the pastor revealed that Bp. Vann was applying pressure to make sure that Church Militant was not allowed to talk on church property, even though this parish was one over which he has absolutely no authority. The pastor confessed to the sponsors that he was in "an impossible situation" and was prepared to not only return the deposit paid back in August but also pay out a $5,000 settlement agreement provided it was kept confidential and papers were signed saying that.

And here's where Church officials completely fumbled the ball. That original secret settlement agreement had mistakenly included Church Militant in it as a party renting the hall at the parish. That was a complete error. We had nothing to do with the hall rental or any contracts. However, since we were mistakenly mentioned in the contract, the pastor said we could see the contract. When we saw it, again with the permission of the pastor before anything had been signed or agreed to, we saw the terms for the secret settlement, and since we were granted permission to view the full contract, we are free to report on it.

To keep some semblance of peace, organizers agreed to find another location, which they have. The talk is now re-scheduled at the Business Expo Center, 1960 S. Anaheim Way, Anaheim, CA 92805. Check-in begins at 3 p.m. Doors to the auditorium will open for seating at 3:45 p.m. The program will begin at 4:15 p.m.

Now, here's an interesting twist, and one of the possible compelling reasons for Bp. Vann's underhandedness in trying to obstruct the Church Militant talk. Back in October, Fr. Greg Boyle, a modernist priest who outwardly opposes Church teaching on various points, gave a talk at Mater Dei High School in Orange. Faithful Catholics contacted Bp. Vann and protested that a priest who supports heresy would be allowed to talk on Church property.

Bishop Vann acknowledged the complaints but blew them off, saying the diocese acknowledged that Fr. Boyle held disturbing positions like women's ordination and same-sex marriage, but since he wasn't speaking directly on those specific points, it didn't matter— an extremely lame excuse. Reports are Bp. Vann was quite ticked off at the complaints about Fr. Boyle and was none too happy that faithful Catholics, as well as Church Militant supporters then responded to his blow-off by holding a Rosary rally outside Fr. Boyle's talk. So, when these same people were hosting their own talk where Church Militant was the invited speaker, Vann became vindictive.

Now, a couple of things stand out here. First, this talk was known about for months — advertised all over Orange. How is it that it was only with less than one week left that supporters were told it would have to be moved? Secondly, how is it that a bishop with zero authority over a parish from a different rite is able to exercise such abuse of power by demanding from them that they cancel the talk? Third, why was all this done in secret with a $5,000 hush money agreement — an agreement that Church officials again severely fumbled by mistakenly granting permission for Church Militant to review it?

Where did that $5,000 come from? The funds of the parish? If so, do the parishioners know that their money from the collection plate was taken to pay for a secret settlement because a bishop with no authority over them was scheming behind the scenes? Was there a promise made by Bp. Vann to reimburse these funds once everything was taken care of? If so, are the Latin Rite Catholics under his jurisdiction being told about this — that their collection plate money is being used in this fashion?

We expose all of this to point out to you that this is the way business is done routinely in the Church of Nice — bully tactics, intimidation, secret agreements, hush money — all along ideological lines because they do not want their dirty tricks exposed. Well, they messed up here badly. Church Militant was directly brought into this, mistakenly, by Church officials and, therefore, we are free to broadcast it everywhere.

So now, the upshot. In their zeal to squash any objections to what is being done to the Church by these modernists, along with possibly just plain old revenge, the bishop and his cohorts have now been exposed for their secret plotting and scheming. Again, as Church Militant continually reports but can't always fully disclose everything we know, this underhandedness goes on routinely in the Church of Nice, and it's disgusting.

Money is paid out to keep things secret, money collected from the laity, who have no idea their generosity is being abused in cases like this. For a hierarchy always going on about having dialog and moments of encounter, they don't think twice about resorting to skullduggery to impose their will. And further, why is it that open heretics acknowledged by a diocese as holding disturbing positions are given carte blanche to speak while faithful Catholics and their supporters are treated with contempt and are plotted against?

The answers to those questions are pretty evident. The Church Militant crew is just getting ready to fly out of Detroit in a couple of hours and will be landing in Southern California later today. Again, the talk has been moved, owing to Bp. Vann's plotting. Please make an effort to attend the conference.

The details of the new venue and times are on the page here. Please pass the word not only of the change in venue but also the larger story. We'll see you in Southern California in a few hours. 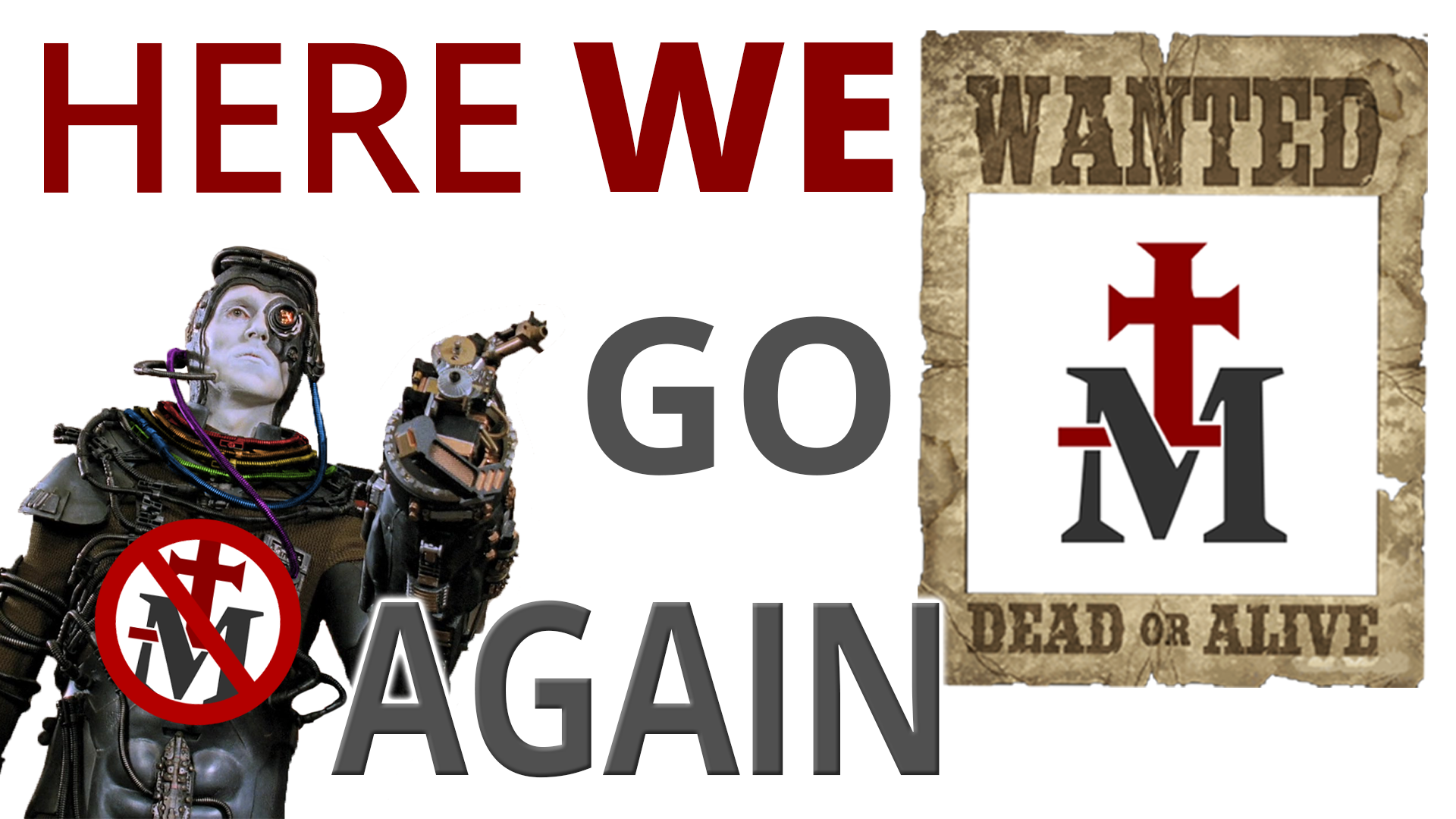 Here We Go Again
And now, a challenge.