Who leashed it up to begin with?

May 10, 2019  0
Podcast Available for Premium Subscribers

Many dioceses across the country are dreaming up new and inventive schemes each year to get money out of the rapidly aging few baby boomer Catholics before they die.

Baby boomers are the group of Americans born immediately after World War II and just before the raucous mid-1960s began — so from 1946 to 1964.

That makes the earliest-born boomers now into their early 70s, meaning the grave is quickly approaching, meaning soon they won't be alive to give their money to the collapsing Church of Nice, meaning the money grab is on full throttle in dioceses all over the country — $200 million campaign in Cdl. Dolan's New York, half a billion in Gomez's Los Angeles, which has paid out more than $750 million in lawsuits from Roger Mahony's day of homosexual men who were ordained as priests raping altar boys left and right.

Here in Detroit, the cash grab goal is $220 million, and that's on top of a recently wrapped up fleecing of the flock of $130 million just a couple years ago.

So when you add up Detroit's total cash grab, it's about a third of a billion. Man, these guys aim high.

Why so much, right now? Because as much as various bishops like to talk up how things are good and we should all be a joyful band of missionary disciples, blah blah, they all know and discuss amongst themselves that the end is quickly approaching.

Aging Catholics are really the only ones who go to Mass in any significant numbers, and even at that, only a minority of them go. It's just the largest minority who attend.

When you get down to young baptized who attend — meaning under 30 — the number is in the toilet. So as another PR/get-money-quick scheme, Detroit Abp. Allen Vigneron and his finance guy married together his so-called renewal effort with a cash register and have launched the latest fundraising campaign.

All this mind you when the loss of faith continues unabated and every other significant number is down. Again, what's happening here in Detroit is happening in virtually every other diocese, with a few exceptions.

We focus on Detroit a lot because that's where we are and lots of people with intimate knowledge of how thing work here talk to us quite freely. So to this silly Unleash the Gospel PR plan. What exactly does that mean?

Questions need to be asked and answered. For example, what exactly has the Gospel been leashed to that now requires it be unleashed?

How was it leashed up?

When was it leashed up?

Who did the leashing up?

Since we here at Church Militant have what you might term "journalistic minds," we think in that fashion and always want to know the big five areas of any journalistic endeavor.

Those big five are: who, what, where, when, why. If you get those areas answered, then you know the story.

So an archbishop coming around for second bigger bite at the apple is a story, especially for a $220 million bite of the apple. Before any money is handed over, those questions need answering.

Vigneron has proposed for the sheep that the Gospel needs unleashing, meaning that, up to this point, at least in Detroit, it has been leashed up. And he now wants a fifth of a billion dollars, on top of the $130 million he just got a couple of years ago, to unleash it.

So again, the questions.

Since the Gospel is leashed up:

Since the archbishop believes this is the case, then those are legitimate questions, lest the sheep are left with the suspicion that this is just some phony-baloney money grab dressed up in religious-sounding language.

Now, for the record, to the degree it applies, it is true that in Detroit and most of the Church in America, the Gospel has been "leashed up."

So let's go through and answer the journalist questions in a general sense, shall we?

First, who? Who leashed it up?

Easy answer: Men who wanted to make sure the "truth bombs" were avoided and the Faith not taught because it would be very unpopular, as it was for Our Blessed Lord, who was killed for dropping those "truth bombs."

Second, what? What was done in the leashing up of the Gospel? Again, easy answer.

A deliberate attempt to suppress the truths of the Faith was engaged in and as a result, tens of millions of Catholics in the United States walked away from the Church because they were not taught the Faith, and the bishops will have to give the most severe reckoning of that truth bomb, owing to their massive sins of omission.

Third, where? Where was the Gospel leashed up? Again, easy answer.

In general terms, in virtually every diocese in America — specifically, in seminaries that were gay hothouses, one of which was here in Detroit before and during Vigneron's time as rector.

Fourth, when? When was the Gospel leashed up? Generally in the wake of Vatican II, which means approximately half a century ago. And that is why practically no one under 60 still goes to Mass — hence, get the money from the baby boomers because that’s all that are left.

And fifth, why? Why was this done? This is the answer that is the most involved because it gets to motive, and the motives vary depending on the individual bishop.

Some, like Detroit Cardinal John Dearden, the first public leasher-upper of the Gospel, was probably one of the Commie plants who gradually climbed the ladder of the Church and chained up the Gospel as soon as he got sufficient power and cover to do so.

While we may never know about the Commie angle for sure, the fact remains that the Commies would applaud what he did.

Then there are the homosexual men who definitely did not want Catholic teaching on sexual morality being proclaimed. They were among the first to leash up the Gospel so as to clear a path for a greater embrace of non-procreative sex within marriage at first, but then eventually extending to sex anywhere for anyone anytime.

Closet cases like James Martin are the beneficiaries of the Gospel being leashed up, because now he gets to tromp around the Church saying there's nothing wrong with homosexuality, it's a gift from God, people should embrace it and the Church should change the teaching. See how this works?

Those are just some of the motives, but they all fall under the category of placing man above God.

But interestingly and, most especially, tellingly, Vigneron never approaches any of these truth bombs in his manuscript, ghostwritten for him by Mary Healy on the seminary staff.

He is averse to truth bombs as he even says in the very pages of Unleash the Gospel. But these truth bombs need to be looked at square on. After all, he's asking for a fifth of a billion dollars.

Shouldn't people want to know that he understands this past — this past which has produced what he himself admits is the Gospel being leashed up?

Unfaithful men, many of them homosexual, with the accompanying psychological and personality issues that make them unfit for ordination, as well as many of them active, are the reason the Gospel is leashed up.

He just wants your money and for you to ask no questions. That's not right. It's massively uncharitable to deceive the sheep like that.

Before we give any money to unleash what has been tied up, we need to know that he actually understands how this all came to be and that he is committed to fixing it.

That requires words, yes, but also clear, decisive action. Certain men need to be dismissed from their posts, permanently. A declaration of their treachery toward the Church and souls needs to be forthcoming.

A public confession of the real state of affairs in the Church of Detroit must be made, and then he must admit his own blame in allowing this to go on for 10 years under his leadership, and he must tender his own resignation to Rome.

The day of reckoning for errant clerics and negligent bishops has arrived.

Most are approaching the grave, and they had better settle accounts on this side of the grave before they stand in the presence of the Supreme Shepherd whose Gospel they were ones to leash up in the first place.

Pray Vigneron and others have the humility to do the right thing. 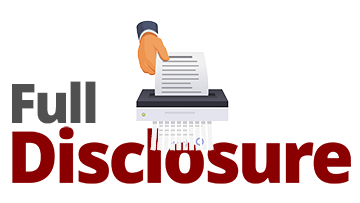 Full Disclosure
We need it NOW.