Unless You Eat the Flesh of the Son of Man

You have no life within you.

As we move through the holy days and into the Easter season, it's helpful to reflect on how this work of Our Blessed Lord is continued on — in space and time.

One of the greatest betrayals by the Church of Nice modernist gang is what amounts to a denial of the Real Presence, that Our Blessed Lord is really, truly and substantially present under the appearance of bread and wine.

And let's be very clear: It is sacrilege to knowingly distribute Holy Communion to those is a state of serious sin. Canon 915 says it must not be done.

Yet the whole emasculated, cowardly or wicked crowd of prelates who simply look the other way on this — or worse, preach it is OK — woe to them if they do not repent before death.

Our Blessed Lord's sacrifice on the cross of His flesh He Himself intended to be perpetuated throughout time — not a new and different sacrifice each time, but the same sacrifice continued, one sacrifice for all.

Bishop Sheen likened the sacrifice of the Mass to an original Broadway production replete with its musical score, lyrics and roles being played out. Then, when the production goes on the road, it is the same production — same music, same lyrics and roles, just occurring in different settings. But there is no change in the original production.

It's just the same production; one production and attending one anywhere at any time is precisely like attending the original — no difference; likewise, the Mass.

When the Jews at Capernaum pleaded with Him to give them this bread always, he replied, "The bread that I will give is my flesh for the life of the world."

In a very real way, we could easily say that the sacrifice on Calvary was done so that from that time onward, all the followers could eat the flesh of their sacrificial lamb, just as was done during that first Passover in Egypt.

The lamb must be eaten or the sacrifice is not complete. This is why Our Lord told the rabble around Him, "Unless you eat the flesh of the Son of Man, you have no life within you."

This became the single doctrine they refused to accept. And notice, it only took one for them to abandon Him, and in the case of Judas, to betray Him.

The crucifixion/sacrifice — for that is what it was — was by divine mandate to be available to all the followers of Christ until He returns in glory. But even before the Second Coming, although looking forward to it in anticipation, the Holy Eucharist is intimately bound up with the Resurrection.

It was in Capernaum that He said whoever eats His flesh and drinks His blood, He would raise up on the last day.

When a Catholic in a state of grace receives Holy Communion, his body, his flesh and blood is being prepared for its final glorification — a glorified body — because it is the glorified flesh of Christ, His risen flesh that we consume. We are being made more and more like Him if we are receiving worthily.

Love demands that a God who could give us not only His spirit, but also His flesh, would do so. Love left incomplete is not love at all. This God has the power to hand over to us His complete self — soul and body — to unite with our soul and body.

A person who believes that to have only a spiritual relationship with the Christ of Calvary is sufficient — such a person is a fool.

The very Christ with whom so many claim to have a personal relationship with, deny that relationship by refusing to fully submit to all His commands, one of which was "eat my flesh." And to make it abundantly clear, He added to His followers in Capernaum: "For my flesh is food indeed and my blood is drink indeed."

Those followers found that kind of relationship too intimate, too personal, a God who loved too much, wanted to be united with man too closely. They wanted, and still today want, God on their terms, Him following their commands to Him.

This is why the followers at Capernaum no longer walked with Him; why Judas' betrayal began there; why the Protestant revolutionaries of the 16th century denied this truth; and why so many in Church leadership deny it by their action.

In Capernaum, Jesus called Judas "a devil" for not believing. Those presented with the truth and who deny it or reject it or downplay it will suffer the fate of Judas.

Easter is about the Real Presence. It's why at the conclusion of the journey with the disciples on the road to Emmaus, Our Lord revealed Himself in the breaking of the bread and their eyes were opened.

Let us pray and work diligently this Easter season to be used to open the eyes of as many as possible to the truth of the Real Presence. For the next few days, some of the crew is going to be in Israel producing our very own Church Militant documentary on the Eucharist.

So our Vortex episodes will be originating from Israel with updates on our progress as well as latest news. Please remember our travel and work in your prayers.

From all of us here at Church Militant: A holy, happy Easter to all of you. 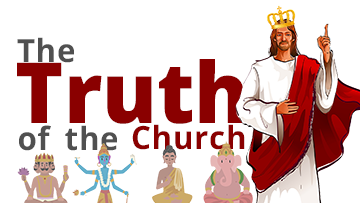 The Truth of the Church
We must shout it from the rooftops.