Will they talk about it?

I'm Michael Voris, coming to you from beautiful Napa Valley, not very far from where I attended middle school and high school. We're here to attend an annual conference by the Napa Institute, where, according to its website, "The most effective Catholic leaders in the country dive deeper into our Catholic faith and examine, with a spirit of charity, intellectual rigor and fidelity to the Magisterium, pressing issues facing Catholics today."

That's quite the claim. But notice it doesn't say the most effective Catholic leaders in the country will develop any solutions, but just that they will dive deeper into the pressing issues. While the conference is a splendid opportunity for wealthy and influential Catholics (including some notable bishops) to get together and chew the fat and, of course, is held in a beautiful, fantastic setting; it has developed the reputation of being long on talk and mixers and very short on solutions.

In its 10-year existence, it has collected some of the most educated and influential luminaries in the Church in the United States as well as some of the most well-heeled and sponsored — by nearly every account, a fantastic opportunity for knowledge and spiritual growth as well as formation.

But it has also come under withering criticism for being what amounts to little else than a wealthy Catholic weekend getaway in the heart of wine country, with a chance to hobnob with cardinals (if you are rich enough) — in short, great if you're here attending, but with no measurable impact on the Church in America once you pack your bags.

More than four out of every five victims of clerical sex abuse are physically developed teenage males.

What does not seem to happen, at least according to reports from various past attendees, is that claim to have a "deep dive" into the pressing issues. Past attendees say bishops are insulated from the really hard questions from wealthy Catholics growing increasingly infuriated at the scandals continually rocking the Church — or more specifically, the bishops.

Questions are asked by a moderator, screened so as not to offend a bishop in front of an audience or, just as likely, to put him on the spot. This year, it looks, however, that practice may be very difficult to maintain.

There was no in-person conference last year due to COVID, and, in the two years since the last one, much of the U.S. hierarchy has clothed itself in shame (from shutting down parishes and a rigid refusal to offer the sacraments to increasing revelations of the near-tyrannical governing styles of many of them, from the canceling of orthodox priests all over the country to the continued refusal to do anything about the likes of James Martin constantly pushing the homoheresy).

Three years after the McCarrick revelations rocked the Catholic world, the long-awaited McCarrick report has been written off by anyone who understands the inside reality as a pure whitewash. Twenty-six dioceses have now declared bankruptcy — not so much because they are out of cash, but so they can put up a legal roadblock to both discovery and any more homosexual sex abuse payouts.

The one single issue that never ever seems to generate the much-ballyhooed "deep dive" is homosexuality within the clergy. Since the summer, Church Militant has produced two summits where homosexuality was front and center as the topic among both canceled priests and canceled seminarians.

A lawsuit has been filed in New York accusing not just the rector and vice rector of the North American College in Rome of sex abuse, assault and sustaining an environment of homosexuality, but also accusing the 30 (30!) U.S. bishops who are on the board of covering it all up and refusing to investigate the multiple claims.

Well, wouldn't you know it, just a day before things kicked off here in Napa, another salacious scandal erupted among the U.S. bishops as the general secretary of the conference, Msgr. Jeffrey Burrill, had to resign as reports began circulating that he had been busted using a homosexual hook-up app known as "Grindr."

A data-mining technique had been employed and traced frequent homosexual liaisons and/or communications back to his phone. USCCB president José Gómez of Los Angeles tried to get out in front of the oncoming trainwreck by issuing a statement announcing Burrill's resignation, but once the reason became known, it was curtains, again, for the U.S. bishops and the question of homosexuality within the clergy and even their own ranks.

Actively gay and gay-sympathetic clergy are the elephant in the sacristy that is never allowed to be spoken about with the bishops in public. Handlers immediately jump in, escort them out, protect them from any confrontation over the issue.

The news about the bishops' general secretary having multiple one-night stands with gay men all over the country apparently, sparked a near-violent hissy fit with homosexualist Jesuit Fr. James Martin. He tweeted this: "Catholic journalism, 2021: spying on a priest (more accurately, using data from an unnamed source who spied on him) for breaking his promise of celibacy, then conflating homosexuality with pedophilia, under the guise of a journalistic 'investigation.'"

Martin's tweet raised all sorts of wonderings on social media if he himself or other priests were about to be busted for gay encounters as well. It's now become the only avenue in which to bring this filthy underbelly of the U.S. hierarchy to light — capturing it electronically and proving it.

That's what Church Militant was forced to do to show how Detroit archbishop Allen Vigneron had looked the other way for more than a decade in the case of his own music director, who he knew was living in a gay partnership and reportedly grooming young men with his partner.

Only when we showed the actual video of the music director admitting it did Vigneron have to get rid of him. There are countless stories like this, all over Catholic chanceries and seminaries and parishes: actively gay men running the show, being promoted, left in place unless and until absolute proof is published in the media, and only then is something done (and usually the least possible).

The Msgr. Burrill case will be an interesting one to watch. He is a priest from La Crosse Wisconsin, the same diocese where Bp. Callahan stripped Fr. James Altman of his faculties, forbidding him to say Mass publicly because he was critical of the hierarchy and pro-abortion Democrats.

There isn't a living breathing Catholic who understands the crisis in the Church who doesn't know the overriding issue is homosexuality within the clergy.

Yet here is another of his priests — this one forced to resign and get out of Dodge, frequenting gay bars, using a phone app to have anonymous gay sex — and so far, anyway, he has not had his faculties stripped.

Here's the bottom line: There isn't a living breathing Catholic who understands the crisis in the Church who doesn't know the overriding issue is homosexuality within the clergy and even the bishops. Heck, 10 years ago, The New York Times correctly labeled the Catholic priesthood a gay profession.

More than four out of every five victims of clerical sex abuse are physically developed teenage males. But it's never allowed to be talked about and certainly not among polite society like here at the annual Napa Institute.

Church Militant is here this year to listen and see if a really bad habit is going to come to an end among the leaders in the Church who do deep dives into the "pressing issues facing the Church today."

Coming to you from the heart of wine country here in Napa Valley. 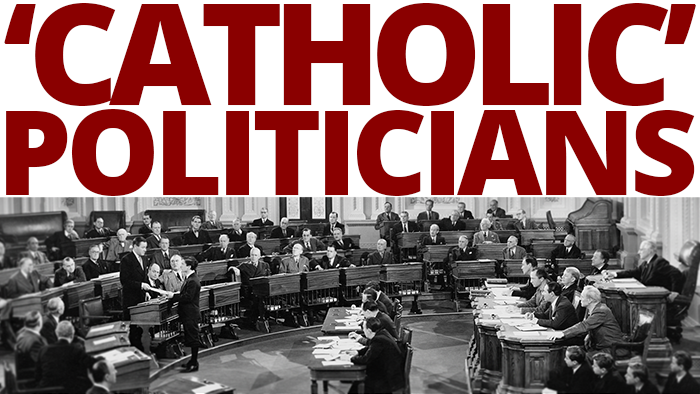 ‘Catholic’ Politicians
A disgrace to the Faith.