The time to stand up and be a saint has arrived.

For example, is it likely that had Hitler or Stalin been able to live forever, they would have experienced remorse, repented and sought forgiveness for their evils? Likely not. Some men, many men apparently, according to Our Lord and the saints, actually die in their sin. Having been afforded multiple moments of mercy and grace by Our Blessed Lord, they simply refuse to cooperate with those graces and die in their sin.

While a person is still alive, we can pray for them to cooperate with the graces afforded them and turn away from their sin, but the choice is theirs. And this is why people are damned. And what is the root cause of damnation for these souls — their failure to love. They did not love God directly, nor did they love God in their neighbor.

So now let's examine the current massive, massive crisis in the Church in light of this stark yet easy-to-grasp reality.

God is love, and to attack Love is to be utterly without love.

Sin is the one thing God cannot brook, and since we are all sinners, we all need to stand in fear of dying in our sins, whatever they might be. But there is a very real distinction that must be made here between committing sin and embracing sin.

True, die in either state and you are damned. But the difference is the person who simply commits sin and experiences true remorse and seeks forgiveness and repentance always has hope, a truly reasonable hope.

But the person who embraces sin, wraps his arms around evil and draws it into himself and allows it to overcome him, mind, body and spirit, gives himself over to evil to be used by evil for the fulfillment of evil ends — such a man, what hope has he? That life rejects love incarnate and, to the point of this homosexual crisis in the clergy, rejects all calls to repentance, casts aside all the graces of mercy given to them.

They have given up on divine love and rushed into the arms of the demon. They have become offspring of the serpent, and they do their father's will. The current crisis — and yes, it is a massive, massive crisis, Wuerl — is rooted in the demonic. All sin is, but this is something far greater in its scope and depth than anyone in the Church could have really imagined.

Good souls don't really have the capacity to wrap their brains around this kind of evil. They don't even think in these terms. It's one reason perhaps that so many Catholics appear to be so unfazed by all this. They don't really believe it because frankly, it does seem unbelievable.

But then again, it also seems unbelievable that at this very moment, all over America there are sick men driving past school playgrounds contemplating how they would kidnap a child, torture him and then scatter his body parts after dismembering him.

Yea, evil is real, and thank God that most people never are capable of picturing this. But Catholics must deal in reality. This evil brought the incarnate Son of God to the cross, innocence crucified.

Satan is real, and he has human agents that have given themselves to his work. Almighty God Himself declared that the serpent would have offspring, and since that is not possible physically or biologically, He was talking about spiritually.

Can any Catholic of sound mind argue that this massive, massive evil is not demonic in its origin?

These are not men of good will who made administrative mistakes. These are successors of the Apostles who follow in the footsteps of Judas and, for whatever their own individual motives, have banded together to make war on the sons of the Church — and they have made war.

And perhaps the most cunning part of their strategy — or better said, the strategy of their father — has been to reduce all this to the realm of the psychological, to the arena of too incredible to believe.

Believe it, Hell is choked full of such men, despite the idiotic anti-Gospel claims that we have a reasonable hope that all men are saved. That spiritual poison itself is demonic, so as to assist you in letting down your defenses.

There is no reasonable hope for the impossible. We know people are damned because the Son of God told us — end of discussion, move on.

An Italian documentary company produced a film recently about the homosexual assaults on boys and young men in a home for the deaf and mute in an Italian town. They caught up with one of the priests who did the assault and did an interview on what appears to be a hidden camera.

Watch this — warning to those who are easily disturbed by witnessing evil.

When Satan controls a soul, there is no end to the depth of the depravity.

What we are witnessing around the globe, but especially coming to light here in the United States at this time, is a decades and decades-old plan to wipe out the Church. Hundreds of millions have been taken in over those decades and all over the planet. And they have been led astray by wolves in shepherd's clothing, whose father is the devil.

Faithful Catholics must oppose this evil with every fiber of their being — spiritual, physical and intellectual.

The command is, "You shall therefore love the Lord your God with all your mind, heart, soul and strength." The time to stand up and be a saint has arrived. Answer the call; your fight is against Satan himself. 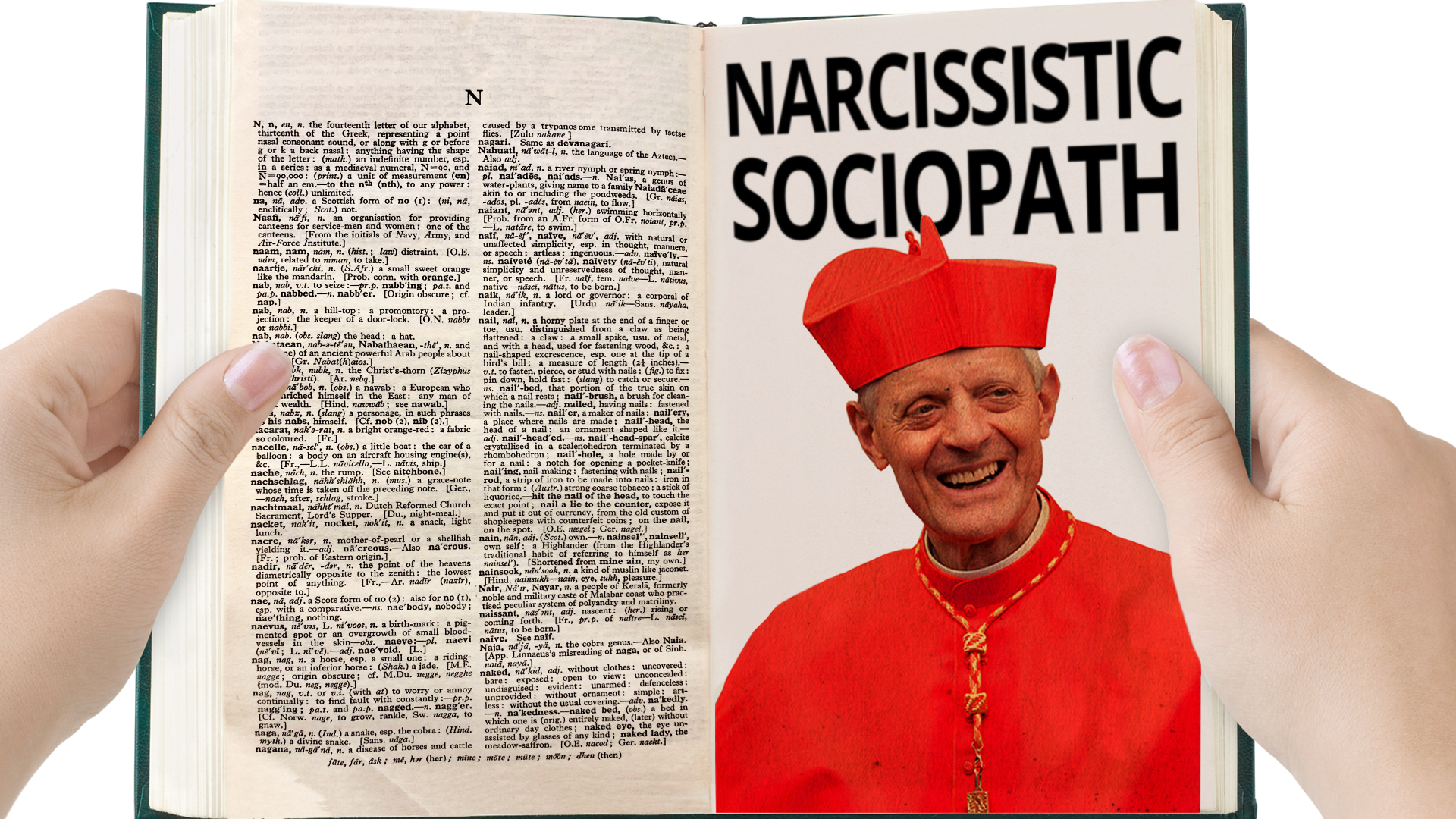 Narcissistic Sociopath
He would rather destroy the Church than relinquish power.