I'm Michael Voris coming to you from Rome, where, in the midst of the controversial Amazon Synod, we are also chasing down other unrelated stories as well.

Each day, we will bring you an update on the synod proceedings, but as we said, there's much more to report from Rome than just the synod.

One of those stories, which has just been dropped by the Catholic media world, is the ongoing scandal involving the finances of the Papal Foundation.

Church Militant has learned exclusively that board members and the overall membership have been lied to by members of the U.S. hierarchy about a certain $25 million.

Last year, soon after the news of McCarrick broke and grabbed headlines all over the world, it came out that the charitable organization, the Papal Foundation, had been manipulated by McCarrick, in part, to send a $25 million grant to the Vatican.

Directly involved in McCarrick's plotting was Cdl. Donald Wuerl, the point man in getting the board of directors to approve the loan.

The money was supposedly earmarked for here, the IDI hospital in Rome. IDI stands for the Immaculate Dermatological Institute in Rome.

Owing to the Church's long-standing presence and involvement in charitable work here in Italy, it is not uncommon at all for the Vatican to have deep involvement with hospitals all over the country.

The problem with IDI is that it has been scandal-plagued for years — massively in debt, hundreds of millions of Euros.

There was a time recently when it was so heavily in the red that employees were not being paid and held a strike in the hospital's parking lot demanding pay.

So when McCarrick and Wuerl approached the board of directors of the Papal Foundation in the United States to fork over $25 million, many of them balked, concerned that money they had all personally put up to assist the Pope's personal charities was being misspent.

Eventually, Wuerl was abe to sufficiently twist arms and hoodwink the lay members for the board that they agreed to at first an $8 million grant, and then a second payment of $5 million for a total of $13 million.

That second payment was railroaded through by Wuerl on a secret ballot.

When news started circulating among lay members of the foundation that something iffy was going on, many of them demanded the $13 million be returned to the foundation, especially in light of the breaking scandal of sex abuse cover-up by so many bishops.

One of those bishops was Michael Bransfield of Wheeling-Charleston, West Virginia, outed as a homopredator and thief. Bransfield, it turns out, was dipping into not only his own diocesan funds to support a lavish lifestyle but also Papal Foundation monies.

He had access to the funds because he was president of the foundation, and if you are getting the picture that this whole thing seems like one big ripoff scam, you're not far off.

Bransfield used almost $10,000 of Papal Foundation money to rent a private jet to fly to the funeral of one of the original lay founders of the board. But none of that was disclosed to membership. It has come out in light of the scandal surrounding Bransfield in his home diocese.

When members demanded at the beginning of this year that the $13 million be returned, they were assured by Wuerl and company that it would be. Months went by and nothing happened.

When members started asking difficult and uncomfortable questions about why the money still had not been returned seven months later, they were told that someone had decided the $13 million would not be returned in whole but converted into a loan.

Who the loan was made to was not made clear. Was the loan directly to IDI hospital which is so far in debt no one in Italy would give them a loan? Or was the loan made to the Vatican, who would then give the money to IDI? To this day, it's unclear.

But there is a lot unclear about this loan, and members have started asking very uncomfortable questions. In fact, this past August, an email was circulated among a huge number of Papal Foundation members asking some very pointed questions about the "loan."

Church Militant was eventually shared on the email, which is explosive, revealing what appears to be a "fake" loan.

Close to a hundred members were shared on this email, and it's causing a stir behind the scenes. These Catholic millionaires want to know where their money is. The email in question reveals a series of questions about the specifics of the loan and the answers are, well, unbelievable.

Question: What is the necessary collateral to justify this loan? Answer: There is no collateral.

Question: Who prepared the loan agreement? Answer: Cardinal Parolin's letter of intent to repay is our only agreement.

Parolin is the Vatican secretary of state, the second most powerful man in the Vatican. That indicates that this scheme goes all the way to the top of the Vatican.

So what do we have here? Total stonewalling from the Vatican about what amounts to a theft of at least $13 million from the Papal Foundation, involving Vatican Secretary of State Cdl. Parolin. No answers; only deflection, lies and/or incomplete, misleading statements.

Members privately tell Church Militant that the board got bamboozled by a fast-talking Theodore McCarrick, a strong-arming Donald Wuerl, a thieving Michael Bransfield, and the whole thing is being nicely covered up and stonewalled by Cdl. Parolin.

And as stated earlier, there isn't the slightest bit of evidence where this money is.

So one immediate question needs to be asked: Did Cdl. Parolin, in cooperation with members of the U.S. hierarchy, cook up a scheme to essentially steal $25 million from charitable Catholic U.S. millionaires and then divert the funds away from the supposed recipient and just keep the money in the Vatican bank?

It's a very solid question because the Vatican ran nearly $80 million into the red last fiscal year.

Could this have been a scheme to try and alleviate that debt?

A shady "loan" is raising all these questions.

Was it a loan? Was there ever a loan? Why was the promise to simply return the money broken and eight months later members informed about the supposed loan?

And perhaps the two most important questions: Where is the $13 million? And is Pope Francis' number two man involved in a scheme to pilfer millions of dollars from unsuspecting generous Catholics in the United States?

Cardinal Sean O'Malley is now the new president of the Papal Foundation — placed, not elected into that position, by Donald Wuerl.

These are questions he needs to answer.

Members also tell us that all this scandal for the past year is taking its toll.

In years past, the foundation would get two or three new members a year, promising to give a million dollars to the Pope's charities.

In the past couple of years, only one new member has joined, according to sources.

Likewise, a sizable number of members have simply stopped sending in their annual pledges — understandable.

One line from the email best sums up the entire fiasco: "This is typical of business as usual from the hierarchy of the Church."

It appears theft can now be added to the list of crimes and immoralities happening here under the Francis papacy — unaccountable, zero transparency, lies, cover-up, deflections. 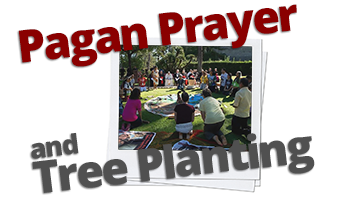 Pagan Prayer and Tree Planting
Where is this all heading?