May 11, 2020  0
Podcast Available for Premium Subscribers

Since there's not really a nuanced way to say this, we'll just go for it: Viganò for pope!

Catholics around the world are responding to last week's forthright attack on the Wuhan virus-overreach by world governments, penned by Abp. Viganò.

Perhaps the most direct assault against coronamania is this line:

[T]here are powers interested in creating panic among the world's population with the sole aim of permanently imposing unacceptable forms of restriction on freedoms, of controlling people and of tracking their movements. The imposition of these illiberal measures is a disturbing prelude to the realization of a world government beyond all control.

And there it is — a Trumpian style flourish, laying bare the entire plot by the Marxist Left.

It's a good thing Viganò is already in hiding for fear of his life for exposing homosexuality in the highest echelons in the Church, because, if he wasn't already, he'd have to be now, after this attack on the lefties.

Countless social media posts pointing at the facts behind his claims, YouTube videos calling out the same, have all been taken down by the leftist-controlled platforms of Twitter and Facebook and so forth.

It absolutely was not to encourage a political atmosphere where the Church could flourish and engage the world and attempt to convert it, which by the way bishops, is what you are supposed to be doing.

In the current environment, loads of people are simply surrendering their civil liberties, ceding them all to their government under the banner of "health." Even the nation's Catholic bishops have succumbed, although given the missing spines of most of them — which have been replaced with a more gelatinous material — that could hardly be chalked up as surprising.

Still, the speed with which most of them caved; the refusal to challenge any of the orders; the willing cooperation exhibited by more notable bishops; and the extent to which they were willing to impose bans for practically anything does reveal more than just a "cooperate with the authorities" mentality. It is emblematic of a "go along, get along" mindset of capitulation, motivated by anything and everything other than the spiritual welfare of the faithful.

The complete absence of intestinal fortitude, which sadly has also been transmitted from them to much of the laity, is perhaps the most striking observation one could make about the Church in the past half-century. The hallmark of the hierarchy for these past 50 years has been to completely collapse in the face of any aggression, and in some cases to actually be willing cooperators in evil.

This is so too with the infrastructure they have built as insulation around themselves. They have recruited many weak men and ordained them; hired weak-kneed sissies as chancery "leaders" and spent money like drunken sailors on a variety of worthless initiatives, lying or self-deluding that these efforts are building up the body of Christ. They are having the opposite effect. They are not producing men, but quislings — an entire population brainwashed into thinking that compromise is "virtuous," and "civility" is so important that truth takes a backseat to it.

Want proof? Look around the political world at all the "Catholic" leaders driving the world to the brink of economic ruin. They're in the Marxist media, fanning the flames of coronamania; they're in governments doing their best to make sure this all translates into a defeat for Trump. These are people who went to Catholic schools in their youth — people bishops have spent decades cozying up to for money, or political protection or whatever.

But whatever it was, it absolutely was not to encourage a political atmosphere where the Church could flourish and engage the world and attempt to convert it, which by the way bishops, is what you are supposed to be doing — not babbling on about immigration and fake man-made climate change, as you slide into Hell with many in tow behind you.

The atmosphere being created in the world is one of great fear and anxiety, continued uncertainty, protests of overreach governors like in the state of Michigan, whose vindictive streak against those protestors and unconstitutional seizure of power has brought a statewide economy to the dust. She wants to create a highly volatile political environment in the state, so as the election comes more into focus, she can turn around and blame Trump.

Only under the tyrannical rule of these Marxists would setting the stage for major hospitals to close in the middle of a health emergency make sense.

Ponder his words again: "[T]here are powers interested in creating panic among the world's population with the sole aim of permanently imposing unacceptable forms of restriction on freedoms, of controlling people and of tracking their movements."

The Church has been co-opted in this effort, partly because there are bishops and cardinals who are part of this plot to usher in a one-world government, and they bully their sissy brother bishops into going along. There are Marxists within the hierarchy, period. Church Militant has been pointing at this reality even before Pope Francis strolled into town with his globalist circus and set up camp in St. Peter's Square.

With very rare exception, there are essentially two types of men in the college of Cardinals — wicked Marxists and those too terrified to challenge them and go about business as usual. Where are the men among the bishops who will say this sort of thing out loud?

Francis won't be around much longer. Who will replace him? His successor will more than likely emerge from one of the men he's elevated to cardinal during his pontificate, a pontificate he should have long ago resigned from when it became public that he personally had been involved in covering up for homopredator clergy he had personal knowledge of.

More than half the cardinals from whom the next pope will arise have been selected by Francis and his globalist, one-world-government crowd, so the odds are that what's coming even after Francis is off the scene. It's just going to be more of the same, maybe even worse.

As recent elections in various parts of the world began to reveal a rejection of the globalist agenda, it would appear the globalists have struck back. Whether they created this pandemic, or are merely profiting from it, they are certainly lying to you about it. Viganò recognizes this and at least he had the guts to say so publicly. 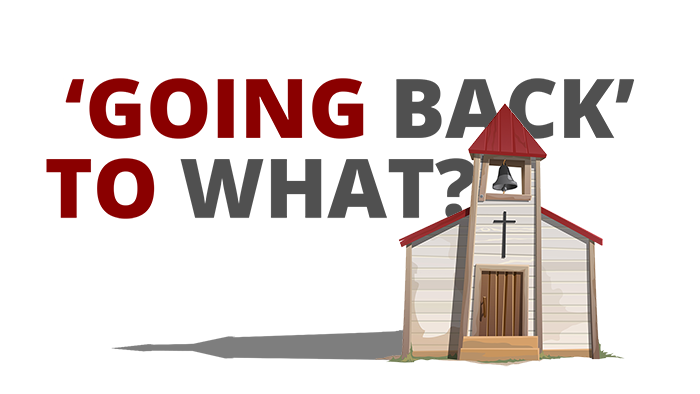 ‘Going Back’ to What?
It's a good question.