Vocations and the ‘Vaccine’

There are a few reasons for these patterns but the overriding one is this: trust. If you are theologically or politically conservative, you are much more likely to simply no longer trust authority — and with good reason. Secular and religious authorities have flat-out betrayed our trust for decades and sold the Church and the country down the river.

So being forced through social pressure — and even some political pressure — to have to take a shot you don't trust morally or scientifically, rubs the wrong way — a lot.

However, in the Church, there is another dimension to this. Fr. James Altman, for example, is earning the scorn of the religious and social establishment for calling out the bishops as cowards in how they have dealt with this whole Wuhan-flu madness.

Secular and religious authorities have flat-out betrayed our trust for decades and sold the Church and the country down the river.

Priests have called the cops on non-mask–wearing faithful and had them removed from the Church and kicked off the property. Some priests have declared they won't hear confessions or distribute Holy Communion unless Catholics have been vaccinated. Even Catholic univeristies are refusing students the ability to return to campus without the shot — Notre Dame, Boston College, Fordham and so forth.

All of this is happening because the U.S. bishops are virtue-signaling and being deliberately ambiguous about the so-called vaccine, knowing full well that their clergy will pick up that baton and act like the "COVID SS" to faithful Catholics. At the very least, they do nothing to correct those priests when they behave in that manner.

So an interesting case is now arising with regard to the sacraments, specifically Holy Orders. Church Militant is beginning to get reports from seminarians and priests that some bishops are sending out the signal, under the radar, that, like Catholic university students, seminarians will not be allowed to return or, more to the point, ordained if they don't get the jab.

That's outrageous, but if some bishops are down with Catholics being arrested at Mass or denied sacraments, why would they stop there? Why wouldn't they impose their insane COVID-vaccine demand on their future priests? In fact, just like the Marxist Democrats saw a golden opportunity to steal the election by manipulating the usual practices associated with voting, why wouldn't some of the nation's bishops do the same thing?

All over the United States, bishops are on record trying to persuade and subtly threaten the faithful that they must get the experimental gene therapy inoculation; that to do so is an "act of charity," implying, of course, that to not get the shot is uncharitable and, thereby, approaches being sinful. This is absolutely monstrous.

For the crowd that has spent 60 years destroying people's faith in the moral teachings of the Church by appealing to their consciences, they are now denying seminarians and transitional deacons the right to exercise their consciences and not get the shot.

Church Militant is still in the process of trying to get to the bottom of this, but we want to share with you some of what has been communicated to us to this point. Preserving people's identities, we share the following portions of some emails we have received:

"I recently learned that the Archdiocese of [XXXXX] is requiring the transitional deacons to receive the vaccine in order to be ordained priests. The poor seminarians can't speak out or resist. Their vocations are threatened if they do."

And in another case:

"One seminary says from an email to the seminarians that 'it's the seminary's expectation that you get vaccinated,' and if they have a reason to not want to get vaccinated, then they would have to speak with the vice rector. I was told that one seminarian went to give a reason not to be vaccinated and the vice rector said 'he would consider it.' Like he has the final say over this seminarian. This kind of language intimidates seminarians from opting out. I think some guys feel they don't have an option."

Of course a young man feels like he doesn't have an option. He is instantly put into a mental position of thinking he has to betray his conscience in order to be ordained. Then again, men who betray their consciences under the guise of obedience is exactly the type of man bishops want to ordain. They are pliable and easily controlled.

No man willing to give his life in service for the Church should ever be forced to lay aside his conscience because some modernist bishop applies pressure to him to pretend that not going along is disobedient. No Catholic is bound to violate his well-informed conscience because a bishop tells him to, especially if it's portrayed as a matter of obedience.

For men like this who have climbed the Church ladder of power, the whole COVID insanity becomes a perfect opportunity to weed out even more "rigid" men, those who won't go along; to uncover the future Fr. Altmans and Fr. Kalchiks and Fr. Perrones, the ones who many of these bishops wish had never been ordained. The type of man many of these bishops want to ordain are weak, snivelling, delusional, easily manipulated personalities who are all too willing to hear that to challenge any of the evil in the Church is somehow "disobedient."

No Catholic is bound to violate his well-informed conscience because a bishop tells him to, especially if it's portrayed as a matter of obedience.

It is never disobedient to stand and fight for the truth. But it is a sin to back down from defending it and to go along with what we could call the "gay drift" in the Church, accepting some homosexual bishop's casting it as being "pastoral."

It's not pastoral to give sin a pass, especially when so many bishops have an alternative reason for doing so. All of this is disgusting. It amounts to saying, "If you want the sacraments, bow down to the jab and accept the narrative."

No. I have a mind of my own and very good reasons for refusing to wear a mask, get a shot and live in fear. If others want to, fine. But any seminarian who is now being placed in this position has to seriously ask himself, "Do I want to be ordained if the price of ordination is to to be forced into something I don't want to do, not for any spiritual benefit, but to become part of a zeitgeist controlling the world and the Church?"

You want to be ordained to fight against that, so if your first act is to bow down to it, how on earth will you ever be able to fight it again? You will have accepted compromise of your conscience as a price to be paid, and these wicked men in miters will continue to force you to compromise your conscience until, one day, you are just like them.

Even the priesthood is not worth sacrificing your conscience for. If you think the so-called vaccine is either immoral or unhealthy, then you have every right to refuse it. But for a bishop to force you into it under threat of being denied a sacrament? Wow — just wow. In that case, then don't get ordained, at least not by him. Our Lord doesn't need your priesthood, but He does want you to be a strong man. In fact, it is commanded. 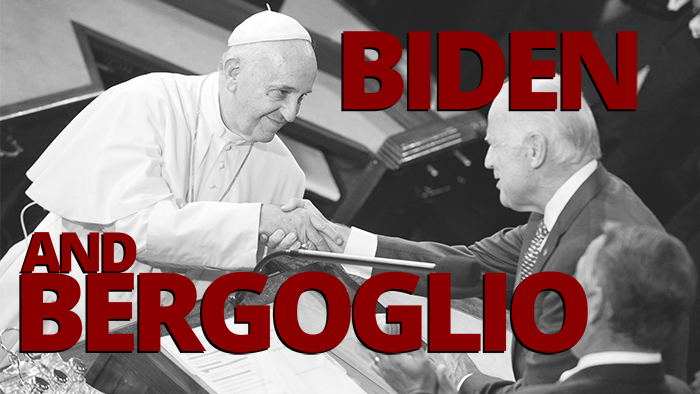 Biden and Bergoglio
What are they up to?