Voices From the Catacombs

Last month, Church Militant announced a new endeavor we are undertaking called "The New Catacombs." The aim is to gather together a large group of clergy, all of whom would be anonymous, even to each other (but known to us and personally vetted by us), to provide them a voice to speak out against the corruption in the hierarchy without fear of recrimination by their bishops. Hundreds of clergy instantly signed up (from all over the country) and still are doing so. We are now going through the vetting process individually with each one.

In the meantime, the idea is that a core group of 12 will produce a regular statement on some matter of grave importance to the faithful and then have the rest of the membership vote on it. If it receives a two-thirds agreement, Church Militant publishes it as the official response of the group.

For them, defending the Real Presence is a political issue, not a theological one.

Today, we are pleased to be able to share with you the clergy members' first official declaration, which we are also happy to report received 100% support from the membership. It regards the spiritual horror of sacrilegious Holy Communion and the foot-dragging of the bishops in opposing it.

Again, we sent this out to the entire vetted membership, who agreed 100%. If you are a deacon, priest or bishop who wants to join in "The New Catacombs" — completely anonymously to anyone except a very few here at Church Militant — please, click here.

This really is a no-brainer. But for many bishops, their concern is for things political rather than spiritual. Many are more concerned with the things of this world than the things of Heaven. Consider all the hoopla and hand-wringing going on right now at the USCCB meeting, for example. They are fighting like cats and dogs — not over sacrilegious Holy Communion given to the likes of Biden — but over whether they should have a debate about whether they should start working on drafting a document that would address all this.

In the end, even if they do vote to start writing some document and if they eventually decide to pass the document (unlikely, because it needs unanimous approval), it would be worthless because each individual bishop gets to decide whether he will implement it in his own diocese.

So all of this is just a tempest in a teapot. It's meaningless in terms of any document that could have any real impact. All this squabbling and grandstanding would result in nothing more than the current situation we already have.

Right now, any bishop in America is perfectly free to announce that he will enforce canon 915, which says these sorts of people are to be denied Holy Communion, placing the onus on the priest to not hand over Our Blessed Lord to child killers.

Imagine successors of the Apostles sitting around arguing over whether they should have a debate about producing a meaningless document about sacrilegious Holy Communion being a bad thing. Every bishop in America should just drop the facade and come out publicly and declare, "No baptized Catholic who supports abortion will be given Holy Communion in this diocese."

It's not that hard. So you have to ask yourselves, "Why? Why is this so difficult to just say and do?" In truth, it's not. Not a thing is preventing this from happening today. Any bishop in America is free to do this, right this moment.

But they won't, because, for them, defending the Real Presence is a political issue, not a theological one. And that says absolutely everything you need to know about the degree of corruption among the bishops — and the root cause of why 80% of U.S. Catholics do not believe in the Real Presence. They don't believe because the bishops do not believe.

Like so much of their blather on every other topic — ecumenism, liturgy, doctrine — they are little else than warmed-over Protestants who just happen to have loads of power, authority and wealth inherited from the blood and toil of the faithful, and they don't want to lose any of it.

A key hallmark of Protestantism is its downplaying (or even ignoring) of the material reality, the role that matter plays in salvation. Even regarding the body itself, it's not viewed as that big of a deal. Good works don't matter. Actions and deeds are kind of unimportant. All that matters is the spirit: Just profess your belief and skip into Heaven, despite leading a life of sin committed with your flesh.

There's a theological reason so many Protestants were not and still are not involved in the pro-life fight: The body doesn't matter in their worldview. It's the same underpinning theology that allows them to deny the Real Presence, to completely dismiss it and reject it.

Notice a parallel here with the U.S. bishops, virtually uninvolved — except for show — in the pro-life cause. And also uninvolved in the efforts to defend and promote the Real Presence. Each is a spiritual truth, and each is largely ignored by the bishops.

The only reason this has blown up now into what amounts to a pointless discussion among them is because so many faithful Catholics are demanding a response to Joe Biden's apostasy; an apostasy that the likes of Wilton Gregory and Blase Cupich and Joseph Tobin actually support. Do they really think they will escape God's wrath at their judgment because they dithered around with a pointless piece of paper that, after all the dust has settled, will only return the entire situation to its current state?

The U.S. hierarchy lost its supernatural faith long ago. Catholics have to understand that. It's a corporation now, run by a bunch of men interested only in their own self-interest. They have, likewise, erected an establishment around themselves of so-called media which insulates them by defending them and publishing their propaganda of deceit.

The U.S. hierarchy lost its supernatural faith long ago. Catholics have to understand that.

And further, they have an elbow-rubbing cocktail class of professors on their payrolls, the intelligentsia of the Church who have deceived themselves into thinking that because they draw a paycheck from the Church, they are doing something good — all while they are suborning heresy, apostasy and cowardice. And then there is the moneyed class who brag about having their local cardinal or archbishop on speed dial, deceiving themselves into thinking that close social contact with these wicked or cowardly men somehow sanctifies them.

But down in the trenches of the Catholic peasantry, it's all fading away as more and more Catholics wake up to their game. We should, in a way, be extremely grateful that, as gut-wrenching as all this is to have to hear, we are, in fact, able to be made aware of it.

The Holy Eucharist is the source and summit of the Faith because it is Jesus Christ. We believe that — they don't. It's just that simple. And that is all you need to know. They are descended from Judas, who rejected Our Lord's pronouncement in Capernaum in his heart and then carried out his foul betrayal a year later, delivering Our Lord into the hands of unbelievers. 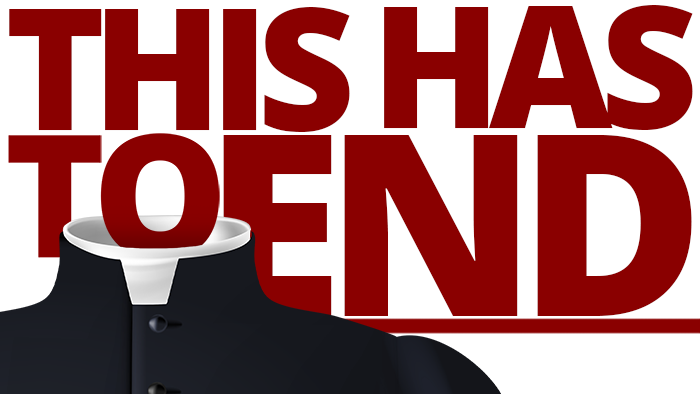 This Has to End
Priestly victims of physical and spiritual abuse.