In more ways than one.

May 12, 2020  0
Podcast Available for Premium Subscribers

There are 175 days to go until Election Day, and no doubt about it, as the campaign heats up — stalled a little bit right now because of the Wuhan virus — Catholics will prove once again to be the tipping force.

Catholics don't so much "lead the way," at least nationally, in presidential elections, as much as they are an excellent bellwether — a predictor of who will win.

Once an election is over and political types do their postmortem on why, how and where did such and such win or lose, three key sets of data are looked at — the Gallup poll, national election studies by various think tanks and media exit polls.

For example, in post-election analysis every year since Richard Nixon's 1972 mauling of Democrat George McGovern, Catholics have voted with the eventual "winner" every time. We say winner in quotes because while George W. Bush won the Electoral College vote in 2000, and thereby the White House, Democrat Al Gore won the popular vote and Gore won the Catholic vote by a razor-thin margin.

Since and including 1976, the first election after Roe v. Wade, there have been 11 presidential contests, and the Party of Death has locked down the Catholic vote in six of those races.

Likewise in 2016, election studies say Hillary won the Catholic vote by three points, but exit polls say Trump won it by four, so that was an edge to Trump in a close one.

We went back to 1972 because it was when various states like New York and California were opening up access to child-killing through abortion. Since and including 1976, the first election after Roe v. Wade, there have been 11 presidential contests, and the Party of Death has locked down the Catholic vote in six of those races.

How is that possible? How can a Catholic voting population get behind a party which for nearly half a century has not only supported but advanced and championed child-killing, with the death toll now at nearly 65 million? Much of the Democrat Party, in fact, has so-called Catholic leaders in it, as well as rank and file Catholics, many of whom go to Mass on Sunday.

Another reason Catholics may be so predictive of who wins is that historically, we vote in numbers higher than our proportion to the overall population. In 2016, Catholics were just about 21% of the U.S. population but comprised about 23% of the vote — punching above our weight class. The reason, at least traditionally, why Catholics have voted in greater numbers is that we know politics is extremely important. Elections have consequences, and those consequences are felt by everyone.

But Catholics aren't the only ones who recognize the importance of politics for bringing about change. Change in and of itself is neutral. It depends on what's changing and who is behind the scenes bringing about the change.

That was Jesse Romero, a man we at Church Militant and me, personally, are proud to call a dear friend. He's the guest on this week's Mic'd Up, which is well worth the watch as we dig into this all-pressing matter of the Catholic voter in 2020.

You can watch Mic'd Up by just clicking on the link. If you're a Premium member, it'll start right up. If you aren't yet Premium, then please sign up today and watch this episode. It's well worth it. It's so important that Jesse even wrote a book about why Catholics must vote Trump.

For decades, ever since the era of homosexual satanist Cdl. Joseph Bernardin of Chicago — appointee of Detroit cardinal John Dearden — heterodox Catholic elites have been blathering on about "the common good." Obama, who was schooled in the Marxist rhetoric of Saul Alinsky in Chicago under Joseph Bernardin, was constantly talking about "the common good." But what the Church means by the "common good" and what the Marxists mean by the "common good" are two very different things.

Whoever wins the Catholic vote in those states will win the Electoral College vote and thereby the White House.

As we have said in earlier Vortex episodes, it's not so much the straight-up percentage of the Catholic vote across the nation as it is how it breaks down state by state, especially in the battleground states. Whoever wins the Catholic vote in those states will win the Electoral College vote and thereby the White House.

Normally, at this point in a normal campaign, some indications would at least start coming into focus. But given the Wuhan virus, nothing is normal anymore. We do know from some early numbers before the pandemic, Trump was at least holding his own among Catholics, which admittedly was razor-thin, but at this moment, all bets are off.

There are simply too many wild cards and political unknowns — the economy, Biden is "Catholic" (small c), the sexual assault charges against Biden, the inability for actual campaigning.

But if the past is any predictor, the political intelligentsia will be looking very closely at any signs, one way or the other, among Catholics.

After all, we haven't been wrong in a very long time. 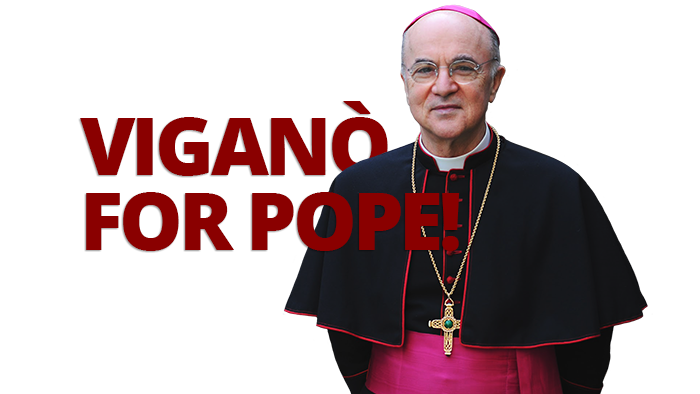 Viganò for Pope!
Why not?