May 18, 2020  0
Podcast Available for Premium Subscribers

The leftist urges of this pope and his pontificate were ably addressed in the book, The Political Pope, by our good friend and wam-bam investigative reporter, George Neumayr. Neumayr is a senior editor for The American Spectator. He pulls together various strands of the pontificate and rightly labels it "political."

Of course, there's nothing objectively wrong or immoral about a pope being involved in politics. It's pretty much unavoidable. Pope St. John Paul II was heavily involved in politics, quietly operating behind the scenes with U.S. President Ronald Reagan in helping bring about the downfall of the former Soviet Union through secret liaisons with the Polish Labor Union Solidarity and its leader Lech Wałęsa.

But politics was not his chief concern and neither was helping to create a world where Marxist principles — disguised as care for the poor and climate change — ruled the day. In fact, quite the opposite was true. As it was with previous popes, any venturing into politics was always about more spiritual-minded aims than purely humanistic ones.

Daniel Mahoney holds the Augustine Chair in Distinguished Scholarship at Assumption College in Worcester, Massachusetts, and earlier this year he wrote a blistering takedown of the Francis pontificate in the magazine National Review titled "Pope Francis, Wayward Shepherd."

Mahoney is the guest on this week's Mic'd Up, which you can view by just clicking on the provided link. If you're already a premium member, it'll start right up. If you aren't, just sign up and watch the episode.

In it, we trace some of the very early influences on the young Jorge Bergoglio, including one particular woman who was Marxist and — the future pope freely admits — had a tremendous influence on him.

One topic Mahoney addresses is the non-Catholic response of thinking and treating the pope as though every word he says is sanctified and comes directly from God. Hint: They aren't, and they don't. Papal adulation of this sort is really a kind of recent phenomenon, where the man who is pope is almost deified by some in the Church.

Remember that it wasn't until only relatively recently that Catholics even knew anything about the pope beyond his name when they heard it at Mass. Outside of that, for the vast majority of the life of the Church, they had no idea what he looked like and no idea what he even sounded like. Pope Leo XIII — of happy memory — was the first pope to ever actually be filmed, and that was only a little more than a century ago — 1896.

And it was only on Feb. 13, 1931 — less than a hundred years ago — that a pope was first heard over the radio, his voice electronically transmitted, which no doubt would cause some today to pine for "the good ol' days." Even up to and into the age of television in the 1950s and 60s, seeing the pope on TV was still somewhat of a novelty, and certainly a rarity to hear him.

But with the death of Pope Paul VI in 1978 and the eventual election of John Paul II, with 33 days of John Paul I in between, the papacy exploded into living rooms across the world. Here was a young, vibrant man — just 58 when elected — barnstorming across the world in dramatic, made-for-TV scenes, standing, for instance, in the midst of millions of his fellow countrymen in Poland, challenging the very existence of godless, Marxist communism by his very presence.

There was the leader of the Catholic Church — the successor to St. Peter, the Rock on which Christ built his Church — facing down the forces of atheism, with an army of millions hanging on his every word. It was awe-inspiring, spectacular imagery — God vs. Satan, Heaven vs. Hell. And all of it came with massive political overtones — West vs. East, freedom vs. communism. No producer could have written this script.

But what it did, aside from enthrall billions with the Church and the Pope, was to usher in a new ear for the papacy. No longer would the pope be a distant, far off, unknown personage. The papacy had gone "prime time."

Seven years after Pope John Paul died, his successor, Pope Benedict — never especially comfortable in the new age of the electronic papacy — would resign, giving way to Pope Francis. Francis embraced the electronic papacy and then some, using its built-in advantage to set about changing the Church into a political force and downplaying its spiritual significance.

But the politics Rome was now pushing would not be a defeat of socialism, but its resurrection, legitimizing it as a force for "good" in areas of climate change, illegal immigration and so forth. And many faithful Catholics have responded in kind, fed up with the social-justice mantra being used to usher in some kind of globalist utopia while the Faith itself is treated shabbily.

Again, this week's Mic'd Up — well worth the watch. 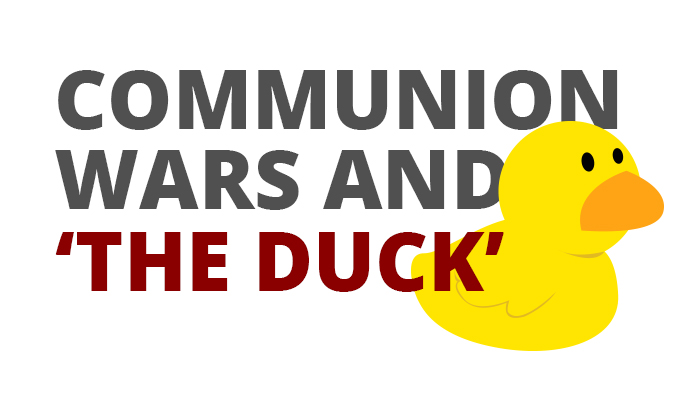 Communion Wars and ‘the Duck’
Some things aren't that hard to figure out.