We Don’t Trust You

And there's no reason to ever trust you again.

As Church Militant was the first to report to you last Friday on our Church Militant Evening News — and which other Catholic personalities picked up afterward — a 28-year-old mother of a toddler was forcibly removed from Mass in a parish in the diocese of Dallas, under the leadership of Bp. Edward Burns.

The priest actually called the cops on Deirdre Hairston because she would not put a mask on, even though she deliberately sat in the back of the church, away from everyone else. Deirdre is early-on in pregnancy and was not feeling all that well. The mask was making her feel even more lightheaded. But none of that mattered to the priest who called the cops. They came and threatened to arrest her, pulling her out of Mass.

That's about as prime an example as you can think of about destroying the trust of Catholics in their bishops. These men have lost their collective minds. The same thing happened in Portland a few days earlier. Bishops encouraging liberal pastors, many of whom are homosexual queens on power trips, to call the cops and have faithful Catholics forcibly removed from Mass.

And, in a stunning footnote, Texas governor Greg Abbott had actually declared not too much earlier that he was lifting the statewide mask mandate. So here you have a case where the state authority no longer requires it, but the bishop feels as though that's not good enough, and his priests think they are empowered to have Catholics threatened with arrest.

There goes all your trust. But now we have an update for you. Because of the publicity this horrible story generated, Bp. Burns actually canceled the 5 p.m. Palm Sunday Mass at the parish. And, in another update, we are told Bp. Burns called Deirdre over the weekend and apologized for what happened. But that is nowhere near good enough — not even close.

Deirdre is early-on in pregnancy and was not feeling all that well. ... But none of that mattered to the priest who called the cops.

His priest called the cops on a young mother and had her dragged out of the church in front of God and everybody. A private apology doesn't cut it. Likewise, canceling Mass was an out-and-out act of cowardice.

If Bp. Burns is truly sorry, he should have gotten up in that pulpit at the 5 p.m. Mass — instead of canceling it — and made a very public apology. Likewise, he should have excoriated the priest for having done that. The priest's actions are inexcusable. They are reprehensible.

And, even worse, Bp. Burns has created an environment where this can happen. He needs to correct that immediately. He needs to go to the parish in his full bishop regalia, at every Mass, and correct this now. He needs to stand before the sheep and apologize not just to Deirdre and her family, but to the entire parish. Likewise, since this is now national news, he needs to issue a public statement saying, in no uncertain terms, that the police cannot be called to drag peaceful, faithful Catholics from the pews.

We can't even believe we're having to say this. It's despicable that such a thing could even happen. A private call so he can tell people he "reached out" is nowhere even close to sufficient. The act was very public and has become even more public. Only a very public countersign is acceptable. Likewise, the priest needs to be shipped off for anger management, just like as happens to good priests.

We hope some good Catholic in the diocese of Dallas puts up a billboard denouncing Burns' tyranny and encourages every single Catholic to choke off their donations. If you touch these men's money, watch how fast they change their tune.

First of all, masks don't work. And, for the record, it was the deified Fauci himself who said so when we were destroying millions of people's lives a year ago trying to "flatten the curve." Remember that?

Second, the CDC guidelines are not "social distance by six feet and wear a mask." It's one or the other, not both.

Here's why: None of this has the slightest connection to health or saving lives or any of that nonsense. You're being lied to. It's all been political from the get-go. The idea that to refuse to wear a mask (especially when you are 30 feet away from the closest person to you) is somehow endangering their lives is idiocy.

But then to actually call the cops on them and haul them and their toddler out of Mass threatening them with being arrested for trespassing? Please — only people with mental problems desire to wield that kind of power over people. There is something injured deeply within their psyche to want to hurt people in that fashion.

Remember, whatever horrible evil Hitler perpetrated on the peoples and countries of Europe, he didn't do it alone. There were tens of thousands of "little Hitlers" and "Karens" running around just like him. The only difference is that the circumstances for them didn't play out the same. Hitler rose to power. They didn't. But they may have been just as ruthless had they received the same opportunity.

You don't have to sport a toothbrush mustache to be evil. Something is seriously psychologically wrong with many bishops in the United States. There are emotional problems at work being passed off as religious this or that. Trust has been obliterated, and it will never return as long as this generation of bishops is alive and does not publicly repent.

But that won't happen because they are mentally ill. They actually think what they are doing is right. Just like the perverted lot of Donald Wuerl, Kevin Farrell, Blase Cupich and Joseph Tobin. Something there is sick in the head. You'd have to have some big mental problem to not only protect the likes of Theodore McCarrick but actually profit off his evil. It's sick in the head. Period.

And now that things are beginning to break down across the entire culture, we are witnessing these problems on local levels. Seriously — arresting a young pregnant mother with her 1-year-old in tow if she doesn't get up from the back of Mass for not wearing a useless, pointless mask? There's some serious mental illness at play right there.

Church Militant has been saying this for years now. In fact, we may have been the first actually to lay it out in very stark terms: The U.S. hierarchy cannot be trusted.

They protected child-molester clergy. Some of them even participated in it; they lied to the faithful (not once, but twice) about all of it; they have paid out billions and billions of dollars of your money in secret settlements to keep you in the dark; they have lied to you about the majesty of the Faith; they have established roadblocks to others wanting to come to the Faith; they have betrayed their high offices — successors of the Apostles — with an abandon that would actually make Satan blush with shame.

At least what Judas did only cost his soul. These corrupt spiritual terrorists take millions of other souls with them to Hell. And their little poster boy of "everyone goes to Heaven" — Bp. Robert Barron — is celebrated by them as the next coming of Bp. Sheen. Sure — because Bp. Sheen believed no one really goes to Hell.

None of this has the slightest connection to health or saving lives or any of that nonsense. You're being lied to.

The bishops have betrayed every trust given them: financial, liturgical, doctrinal, devotional, social, personal — you name it. There's nothing untouched by their cowardice, malice or ignorance. If it weren't for a handful of brave priests, there would be virtually nothing left of the Church in the United States. Catholics of the faithful stripe have had to resort to nothing short of underground, secret Masses for the past year to receive the sacraments and avoid being arrested.

It's spiritual insanity, and yet, in the glaring light of all this, they have the gall to ask you to keep giving them money. This multi-hundred-million-dollar campaign here, that gigantic fundraiser there — it's like us being asked to trust the non-stop barrage of Marxist media reporting that's telling us we need to be vaccinated, wear a mask even after we've been vaccinated, stay in our homes and shut down every business in the country.

Or the same charlatans telling us Biden's presser was "outstanding," a spectacular mastery of the facts, stupendous. Or that there is no crisis at the border. There are no kids in cages, just children in cozy, friendly "facilities."

All this from the same people who went on for years about Russia collusion, anonymous sources and every other imaginable fantasy and lie. Excuse us if we simply don't believe your China-virus fearmongering. You used it to steal an election and usher in a communist takeover we now see unfolding.

It's like the establishment GOP having betrayed the trust of over 75 million voters in the election theft now asking us to help them get back power to stop Biden's communist takeover. Where were you during the post-election days of evil, McConnell? And speaking of McConnell, has anyone else noticed how much he and even Mitt Romney would be really good Catholic bishops?

Trust has been destroyed, demolished, obliterated. Perhaps faithful Catholics should now have personal attorneys present with them at Mass so when the cops are called because the faithful won't put on a mask, they can have their attorneys deal with the cops.

This is a mental illness originating from a spiritual corruption  — nothing more. 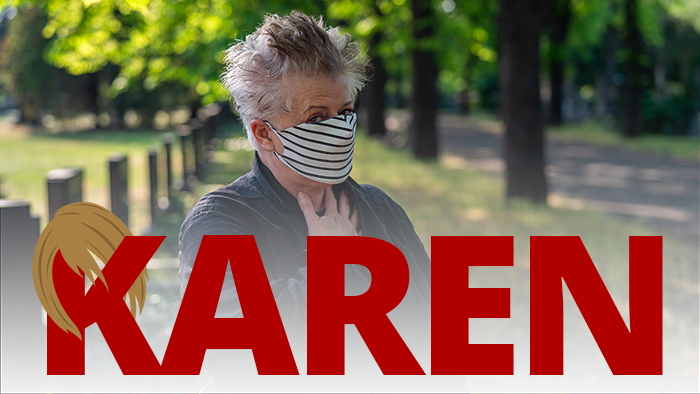 Karen
You must conform.