But it is denied time and time again.

It's an unfolding tragedy in the Church that isn't getting a lot of airtime, but more and more frequently, priests persecuted by their bishops, as well as laypeople, are having to turn to the secular courts for justice.

For many years, courts would not hear cases from internal fights in the Church, owing to a lack of desire to embroil the civil courts in what were seen as Church matters. Dishonest bishops and their legal teams capitalized on that and had legitimate cases tossed out of court left and right, arguing about "separation of Church and State." But that is beginning to change as laity, even now, are having to turn to the courts for justice.

We have attached the whole filing against Vigneron and his cronies so you can read the entire matter for yourself.

A couple weeks ago, a class-action suit was filed against the U.S. bishops' conference for fraud — taking hundreds of millions of dollars over the years from faithful for the Peter's Pence collection, presenting it as a collection for the poor when the vast majority of the money went to pay increasing Vatican debts.

Just last week, in the continuing evil of the case of the archdiocese of Detroit (AoD) and its Abp. Allen Vigneron trying to destroy the good priest Fr. Eduard Perrone, parishioners — the people sitting in the pews — actually had to file suit against Vigneron, their bishop, and his archdiocese in an attempt to get justice.

The lawsuit neatly and concisely spells out every detail of what has been going on inside that wicked chancery for the past 18 months regarding this case. We have attached the entire filing against Vigneron (it's only a few pages) and his cronies so you can read the entire matter for yourself. We highly suggest taking the few minutes to read it for yourself because it lays out every last sordid detail that Vigneron has allowed to go on.

But here are some of the most important takeaways.

Recall that Church Militant has known the identity of the supposed accuser for weeks before any of this became public. And what's most important, we knew that Vigneron and his archdiocese did not know that we knew. So, in their minds, no one knew the truth of the matter, so they mistakenly thought they could say whatever they wanted to and get away with it. Wrong!

Knowing who the supposed accuser was before the story became public gave us here at Church Militant the opportunity to vet the claims of Vigneron and the archdiocese against Fr. Perrone. And those claims were completely bogus, and Vigneron and his hit man, Msgr. Bugarin, knew they were bogus.

In fact, Bugarin reportedly actually helped manufacture the claims, bullying the accuser into saying things that were not true. Here is at least one pertinent excerpt: "Bugarin twisted John Doe's allegations and fabricated a rape charge against Fr. Perrone in order to force the AoD to remove Fr. Perrone and thereby shield the AoD and Bugarin from a negative AP story."

The backstory you need to know here is that the supposed victim's wife, fed up with her marriage and wanting a divorce, is the one who called the AoD and made the allegation in order to get some money from the Church before seeking a divorce.

The AP was tipped off, and when they got in touch with the AoD, Vigneron — in order to make it look like the AoD was not ignoring a charge of sexual assault — set this whole sordid, wicked plot in motion.

Bugarin "interviewed" the supposed victim. Now, you also need to know that the man himself — the supposed "victim" — has a number of professionally diagnosed psychological illnesses that have prevented him from working for close to 20 years, and he's on a pretty heavy-duty regimen of psychotropic drugs for it. As an aside, those close to the supposed victim tell Church Militant this was in large part responsible for his wife wanting a divorce.

Once the AP got involved, Bugarin — with Vigneron's approval — went to work, trying to get the alleged victim to level a charge of rape against Fr. Perrone, emotionally manipulating him in the process. But the victim, time and time again, refused to make that accusation.

Immediately after his wife called — and in the climate of the Pennsylvania Grand Jury Report hanging in the air — the AoD's investigator went to the accuser, who said he did not want to go public with anything. The AoD disregarded his wishes and went to the county sheriff and got one of Bugarin's parishioners to work the case. Nancy LePage worked for the sheriff's department and was a parishioner of Bugarin, both at the same time. Together, Vigneron's hit man and — very important — a publicly paid law enforcement officer kept coming back to the accuser and trying to coerce some kind of damning statement from him about Fr. Perrone.

Eventually, LePage's summary of what she thought was flat-out rejected by her superiors as having any merit at all. It was full of holes from top to bottom. She essentially created accusations by implication and attributed them to the supposed victim, all under the watchful eye of Msgr. Michael Bugarin, whose main interest was getting Fr. Perrone so that the AoD would not look like it was ignoring victims.

In the process, he and Vigneron created many more victims, not the least of which was emotionally brutalizing a psychologically disturbed man, throwing Fr. Perrone under the bus and placing a cloud over the entire parish of Assumption Grotto.

LePage, Bugarin's parishioner, routinely destroyed all her notes after each interview and merely produced summaries. In one telling revelation from the lawsuit, "LePage falsely reported that John Doe claimed Fr. Perrone had sodomized him." LePage included that claim in her official report — even though the victim himself flat-out denied it.

Again, we urge you strongly to read the filing for yourself.

Church Militant has been saying for years that operational control of the Church has been seized by weak, cowardly men, many of whom also happen to be homosexual. These wicked, self-interested men have no love of anything or anyone except themselves and their own personal agendas.

Church Militant will be soon notifying the papal nuncio in Washington, D.C. of the real truth of the matter, as well as the Congregation for Bishops in Rome.

They steal from the people, lie to them and throw their own clergy under the bus. They endanger the spiritual welfare of the laity and do not care about anything spiritual. Detroit under Abp. Allen Vigneron is a prime example of this. He has permitted this filth to continue. He has done nothing to put a stop to it, thus revealing his true identity.

Two years ago, owing to many factors, Church Militant called on Abp. Vigneron to step down, to resign. And that was before all this latest garbage. But far from being viewed as unfit, his fellow faithless cohort at the USCCB actually voted him second in command — vice president of their conference, which usually means he would ascend to the presidency three years from now.

Has anyone at the USCCB picked up the phone and said, "Hey, Allen, what the hell is going on with this case?" If they haven't, shame on them. Like so many other bishops in the United States, Vigneron is unfit for his high office. Period. And all this is happening while he has the gall to ask the people here in Detroit for $200 million so the archdiocese can "fulfill its mission."

This man has to go, and so does Bugarin. Bugarin should be defrocked for the evil he has perpetrated against a fellow priest. He knew these charges he leveled were a pack of lies, created out of thin air by him and a parishioner who worked for law enforcement. What they didn't count on was Church Militant knowing the actual truth of the story because we knew the supposed victim, and after we dug around, we discovered the whole thing was, in fact, a pack of lies.

All the faithful want is justice, but you can't get justice from confirmed liars and wicked men, especially ones pretending they believe the Faith. No one who acts like this, and still to this day sticks to their guns and continues this vile persecution, can possibly believe the Faith. The Church, for them, is a money-making institution that must be protected at all costs, and that's all it is to them.

Church Militant will be soon notifying the papal nuncio in Washington, D.C. of the real truth of this matter, as well as notifying the Congregation for Bishops in Rome, and will be asking each for the removal of Vigneron, as well as a purging of his chancery. We will also be in touch with the USCCB, asking them to nullify last November's vote in which Vigneron was elected vice president. When we have all that in order, we will be reaching out to you to sign a petition asking for the same.

This evil has to stop — all of it. And this case is just one of many. But the laity has to start somewhere.

Detroit was the center of the storm back in the late 60s and early 70s under the reign of Cdl. John Dearden. Vigneron was ordained by that modernist prelate. It seems altogether fitting that the strike back against this modernist filth should commence in the same archdiocese where it all began. 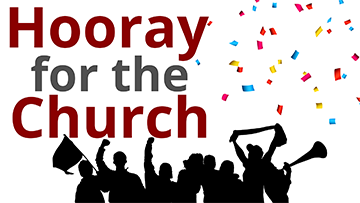 Hooray for the Church
Cheer and Sing.