Catholic exceptionalism is a reality.

Here is something no one in the Church of Nice is comfortable saying — and probably don't believe. Catholicism, by virtue of its founder, is superior to any other religion in the world, and all other religious sects are false because they are founded by fallible men — there, case closed.

Jesus Christ — the eternal Logos incarnated — established the Catholic Church, and it is the only true religion. The others are false — period. Even though some, perhaps even most, may have some degree of truth in them, the fullness of truth is completely obscured by the falsehoods that riddle them through and through.

And this not only applies to all non-Christian world religions, it also applies to every single Protestant sect: They are all and each heretical to varying degrees.

This is not to talk about the issue of who might be saved, or who might be damned, this is to talk about where the fullness of truth resides, and its lone, singular residence is the One, Holy, Catholic and Apostolic Church founded on Blessed Peter — period.

Me saying something like this a number of years ago was the pretense for homosexualist Bp. Joseph Bambera of Scranton, Pennsylvania banning me from speaking on Church property. Organizers just shifted the conference to a nearby hotel.

Modernist bishops, especially homosexualist ones, hate this kind of direct speak because it puts the lie to their errant theology. They do not believe in what we might term Catholic exceptionalism because if they did, they would have to completely change their approach to catechesis and evangelization — not to mention fundraising.

This is why so many of them have rushed out the door and tripped all over each other to promote the Protestant theological filth of the Alpha program, promoted heavily by Detroit Archbishop Allen Vigneron, another homosexualist bishop who still, 10 years after becoming archbishop here, turns a blind eye to the sodomy-promoting Dignity Mass — the longest running one in the world.

Vigneron is all apologetic and friendly towards the Muslim community here in Detroit, never missing a chance to be "ecumenical" with them, and is also friendly toward a cadre of gay priests here in town who he and many others know are gay, and yet he lets them remain in their pastorships all over the archdiocese, destroying souls in confession as well as from the pulpit.

Where are the words from any of these modernist bishops to lift the drooping souls of the faithful they have charge over?

They are all so concerned about offending anyone, saying anything that might ruffle the feathers of someone from another religion, that they ignore the legitimate needs of their own flock, the very ones they are supposed to be fathers to.

And what has their decades of friendly relations and back-slapping ecumenism gotten them? Absolutely nothing. Not only are conversions few, but the exodus from the Church is a virtual stampede.

So this bears some examination, some serious examination, because if these modernists want to go to Hell for their lukewarm or even non-existent supernatural faith, they can't be allowed to take other souls with them.

Since they refuse to teach the fullness of the Faith with, yes, all its offense — and it is offensive, just like the Gospels say: "And they took offense at Him." Since they refuse, we laity must step up.

We must be willing to take the blows they will not. In truth, we should have had this mindset all along, it's never not our duty to preach the Gospel, but now there is a heightened urgency to it.

We must insist with our pastors that the Mass be offered in an atmosphere of reverence, that people be re-instructed.

Priests must be willing to stand up in their pulpits, if bishops won't, and declare that the vast number of Catholics have been lied to, deceived and deprived of the truth in its fullness for the last half-century.

Names must be named, like Cdl. John Dearden here in Detroit with his vast-reaching, filthy modernist theology which destroyed this archdiocese and then spread throughout the country with the help of evil homosexualist bishops like Joseph Bernardin in Chicago, McCarrick in New Jersey and so forth.

These men and the men they recruited and advanced — many, many of whom were sodomites — introduced the modernist heresy into the lifeblood of parish life starting in the 1960s and 70s.

Their memories and work must be publicly condemned, just as history has condemned other destroyers of civilizations. In this case, Catholic civilization has been destroyed and must now be rebuilt, against whatever odds happen to be the case.

The challenge is that until the current modernists are either removed, die, are rebuked or smoked out, their evil persists. These men do not believe in the Catholic Church as She is constituted in Herself, as Christ present here on earth in His mystical body.

They reject that notion, creating instead a kind of universalism of religions, not directly saying all religions are of equal worth and lead to the truth, but communicating that thought in their actions and omissions.

Of course, homosexual men, naturally terrified of conflict that would require the summoning forth of authentic masculine traits, will never assert this truth, because they will encounter rejection, and fear of rejection is kryptonite to a homosexual man.

And why is he allowed to rampage around the Church and inflict himself on unsuspecting souls? Because other gay men, bishops, allow him to; and moreover, other gay men in robes actively promote him because he preaches the sordid filthy perversion of Catholicism that they wish to wallow in.

The simple bottom line is this: They refuse to accept and believe the reality of Catholic truth, Who the Church is, because to do so would destroy their sodomitic empire they have slaved to construct in the midst of this Church. They will never dismantle it, which is why we must destroy it.

Declare the truth of what the Church is. This is your duty as baptized and confirmed Catholics. 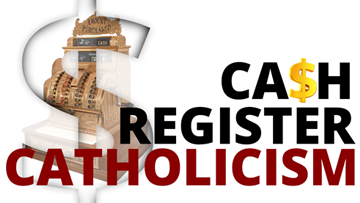 Cash Register Catholicism
It's all about the 'ka-ching.'