The homosexual priests child-sex-abuse scandal cost the Church in the United States approximately $3 billion. That's billion with a "b." That's approaching George Soros-levels of spending. Imagine for just a moment two things. One, that the leadership of the Church in America had remained true to the Faith and that it would therefore be united and able to use those billions to combat the hostility to the Faith so prevalent in the culture. But too many in leadership, owing to treachery or cowardice, ignored every one of the millions of warning signs springing up before their eyes. Men were ordained who should have never been admitted to seminary. Good ones were chased out or refused admittance. Men were made bishops who were little else than hirelings interested in pushing their own agenda.

Great division has been sown in the Church — and good for all those faithful laity who expose it. We hear time and time again from a large number of priests who tell us they can't breathe a word publicly about the state of the Church or they will be strung up by their bishop or superiors. And let's face it, much of what has gone wrong in the Church is a result of so many in authority trafficking with the cultural and political Left. They have made common cause with them and pushed a decidedly un-Catholic agenda, disguised as Catholic concern for the poor. Under that umbrella, they have pushed down the faithful's throats the idea that active homosexuality is okay and we should embrace it or at least not confront it. That's the number one item on the agenda of the Left.

They have practically fallen silent on the issue of abortion. A couple weeks ago during their bi-annual meeting, which went on for three days in Indianapolis, 10,000 babies were being murdered in the nation's abortion chambers — and not a peep about it. That's the Left's number two issue.

And at that same meeting, the dominant issue was immigration. You'd think by listening to so many of the bishops that the only way to avoid Hell is to oppose Trump's wall and the travel ban. Immigration is issue number three for the Left because going on about it non-stop gives the appearance that they have the high moral ground, owing to their love and concern for the poor.

And of course the remaining leftist item on their agenda — climate change. I wonder how many Catholic leaders actually realize that if they don't straighten out with regard to preaching the truths of the Church in their completeness, how much of a "climate change" they're going to experience in the next life.

Imagine if there was unity among them and the resources to put that unity in action in the temporal realm. But, alas, the unity is gone; and the resources have been paid to thousands of victims of their homosexual priests and their attorneys. What an utter and complete waste, all the money donated and buildings built and the entire patrimony of the Catholic Church in the United States being frittered away.

Almost 50 percent of all those baptized in the Church have completely left the Faith; and four out of five of them say they will never come back. In any other profession, this waste of resources, this epic failure, would be considered malpractice. And in the realms of the spiritual, that's exactly what it is — ecclesiastical malpractice. Too many of the leaders are mistreating their sheep, abusing them with half-truths and protestantized ambiguities about the central teachings of the Son of God.

Over the upcoming holiday weekend, almost every bishop in America will be in Orlando, Florida, for a four-day convocation of Catholic leadership with a privately handpicked delegation from his diocese. They will be there to talk and talk and talk about making a Church run before it's able to walk again.

The major problem in the Church, which has been ignored for decades, is a lack of faithfulness to the Gospel, not a lack of evangelizing. Yet all the emphasis is on evangelizing, with the new slick term for this generation being "missionary disciples." It completely overlooks the reality that most of the people doing the so-called evangelizing either don't know the Faith sufficiently to do so, or know it but think better of preaching any of the hard truths.

The number one area this spiritual malpractice occurs is in the parishes. That's the one focal point for the very few Catholics, now less than one in five baptized, who still go to Mass. Most parishes are disgraceful in their formation of Catholics. Their leaders will have much to answer to their Master for. None of the hard issues are ever preached, and in their place is a general feel-good sputum about societal issues. This is akin to taking the easy way out because no one sitting in the congregation is in favor of poverty.

So the social justice crowd reigns supreme. What they don't realize or choose to ignore is that the crowd they are reigning supreme over won't be there in another few years. The agenda for the convocation has 66 breakout group discussions. Not one, not a single one, addresses the issue of the great irreverence at Mass shown toward Our Lord or the increasing protestantization of whatever catechesis remains. Not a single minute will be sent talking about liturgical abuse, the homosexual clergy that has caused so much damage, the cowardice or complicity of so many bishops about refusing to preach the hard truths.

What do these people think they are going to accomplish by not addressing the real problem, the elephant standing right in their faces? There are plenty of workshops on immigration, multiculturalism, diversity, social justice, racism, the role of women, inner cities, refugees, climate change, violence — all with a Catholic slant. But that list could be the agenda for either of the political parties at their annual meetings. Not a blessed thing on correcting abuses in the Mass, the great need for increased devotional life, the necessity of the Catholic Church for salvation; without these elements, you can be filled with all the joy you want, but don't expect anything except continued slouching to irrelevance. Too many bishops, Cdl. Timothy Dolan among them, have simply chosen to not speak about the real issues, the issues that damn souls to Hell, including the topic of Hell itself.

This convocation will be the high-water mark of the Church of Nice, where all that has been a loose confederation of protestantized approaches, and theology will become more concretized. This will set the tone for the final chapter of the Church in the United States because it's too focused on man and not God. It looks like it's about God, but it's really not, because it will not address the millions of sacrilegious Holy Communions that happen every Sunday, the need for confession and for the absolution for sins that can be the only genuine source of joy so a person may approach Our Blessed Lord in the Eucharist.

What is being ignored is the Cross. Failing to preach it for decades now, leaders have to resort to conventions and meetings and workshops to figure out what has gone wrong and how to fix it. What has gone wrong is catechesis, and until that's fixed, no amount of evangelization or missionary discipling will work because too few understand what they are discipling. What a waste of misdirected energy.

We will be in Orlando covering the convocation over the whole weekend. Please keep our work in your prayers. 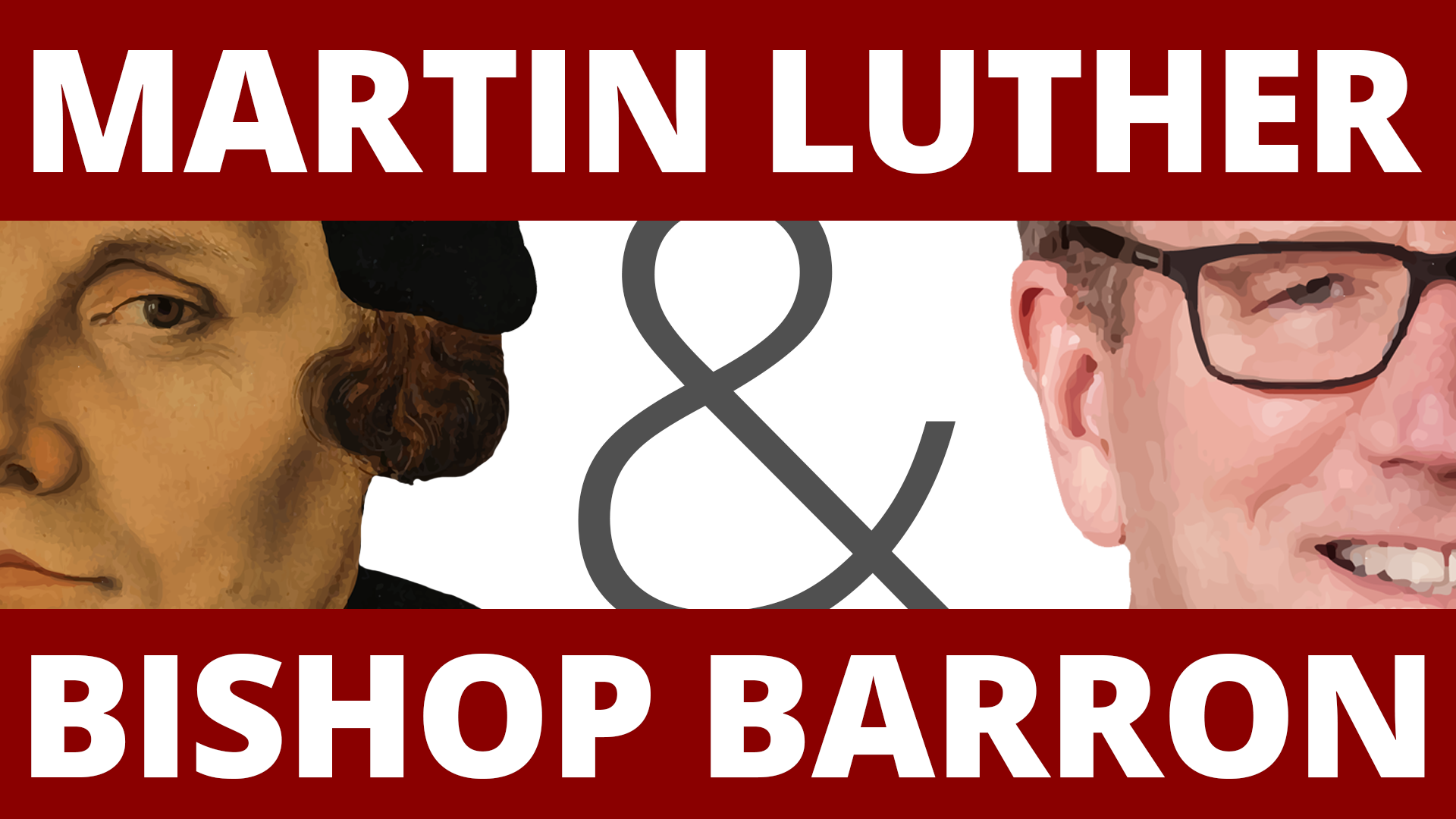 Martin Luther and Bp. Barron
There's no such thing as one cockroach.