What Are We Learning?

So amidst all the precautions and closures and end-of-the-world-type hysteria, what have we learned, or what are we in fact learning?

Well, actually a lot. Much in fact is being exposed — really exposed — politically, culturally and ecclesiastically. Politically, however deep any of us thought the swamp was, we have learned that we were wrong. It's actually much deeper than we ever thought.

The "Get Trump" brigades are out in full force, with the Marxist media trying anything they can related to tying Donald Trump to COVID-19. They are trying to dream up nicknames to pin the virus to Trump, calling it "CoronaTrump," "VirusTrump," and a bunch of other stupid monikers.

So far, none of them seem to be sticking. But it's blindingly obvious why they are doing it — so when November comes around, Trump loses. They hate him for being pro-life and, in their incorrect view, they see him as stacking the courts to dump abortion. So let's blame him for the virus.

Are you using the opportunity to speak to so many of your flock locked up behind closed doors?

Likewise, we see the complete, unrestrained response of the media to help whip up all this hysteria, causing people to run on grocery stores, for example.

No one is saying there isn't a danger, or that people shouldn't take reasonable precautions. But to keep broadcasting non-stop the latest death numbers — updating them non-stop — it's reminiscent of the days of the Vietnam War and the nightly network newscasts.

But for Catholics in particular, what we are learning — or rather, confirming — is what we have seen and known for quite a while: Too few bishops have any supernatural faith, or if they do, it's only a tiny amount, completely insufficient for the sacred office they hold.

Look, Your Excellencies, either this is the Armageddon experience you are all portraying it as, or it's not. If it is, where are all your spiritual aids? Why aren't each of you doing daily livestreaming of praying the Rosary — teaching your flock the Rosary — comforting your sheep by sitting in front of a webcam in a studio and reading something of the lives of the saints?

Shall we go on?

Our guess is while you have shut up nearly all the churches, that you haven't closed down the legal teams and the bean-counters in your employ. For once, publish a letter saying you're closing the chanceries and not the churches. Are you using the opportunity to speak to so many of your flock locked up behind closed doors — to teach them the catechism that you have been so neglectful about for the past half-century?

Almost every day in this crisis, Church Militant is sending out a spiritual reinforcement e-mail with various assists to remind people about fortitude and perseverance and prayer. You can easily follow suit, you know, Your Excellencies. It's not that hard, especially since you don't really have anything else to do until this comes to an end.

Most of you are old, out-of-shape men with probably a variety of underlying health issues. Are you all self-quarantined?

Have you canceled your meetings with millionaire donors whom you schmooze with? How about the CPAs and the lawyers and the marketing guys running your expensive multi-zillion-dollar fundraising campaigns where you lie to the faithful and fleece the flock? Canceled any of those activities, have you? Yeah, we didn't think so.

Before the parish doors were barred shut, many of you took the opportunity to forbid Holy Communion on the tongue. At last, many of them thought, here's a chance to kill that medieval practice and blame it on something out of our control.

None of them have confessed that the practice of receiving in the hand, drinking from the cup and laypeople distributing Holy Communion was smuggled into the Church 500 years ago during the Protestant revolt, precisely as a way to kill belief in the Real Presence.

See, the very first Protestants were actually baptized Catholics, who did at one time believe in the Real Presence. But the Protestant revolutionaries had to knock that belief out of the box. So they started these practices to weaken the faith of those first former Catholics.

Just as God withdrew Himself from the temple in the Old Testament, who's to say He isn't doing something similar right now — trying to send a message?

And the same thing has happened here in the United States, as well as other parts of the world, with the move by various bishops starting in the 1970s to install the disrespectful practice and embed it in the minds of the faithful.

It's not a big shock that homosexual satanist Cdl. Joseph Bernardin was the one leading the charge nationally — a topic Church Militant covered extensively in our series, Case Files, one of our Church Militant Premiums programs — where we get into the nitty-gritty of how this all came about. Click on the link to see how it all played out.

How many bishops are using the COVID-19 crisis as an opportunity to bone up on all this — to learn the real history of why their dioceses are falling apart? Seventy percent of Catholics don't believe in the Real Presence, so all this could be easily viewed as Our Lord withdrawing access to Himself — just saying.

If the New York Times can openly speculate — recklessly — that 270 million Americans are going to be infected, then why can't we posit a more sober and serious reflection?

The Church is in a state of disrepair, broken down by decades of lying, cheating, greedy, homosexual, cover-up bishops who themselves don't seem to believe in the Real Presence, judging by their cowardice to deal with heretics on the political scene.

So just as God withdrew Himself from the temple in the Old Testament, who's to say He isn't doing something similar right now — trying to send a message this Lent?

Whether the bishops have any supernatural faith left to be able to read the signs of the times, well, many of these men vote for and support the Party of Death. You do the math. 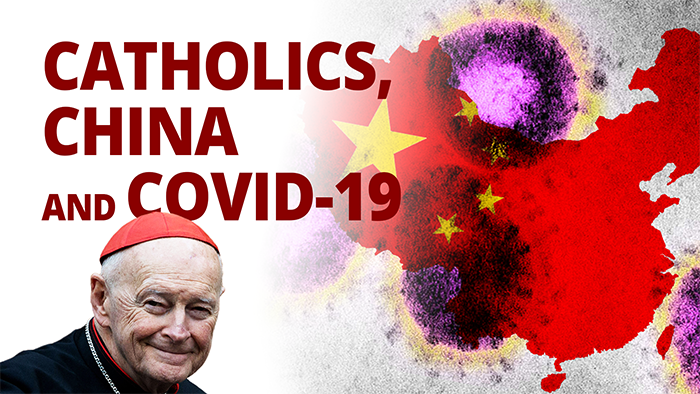 Catholics, China and COVID-19
Too many coincidences.