What If They Were Racists?

Following up on a Vortex topic we told you about a couple of weeks ago, we wanted to bring you an update. Remember the parish — although they call themselves a "community" — the parish of St. Joan of Arc in the archdiocese of Minneapolis/St. Paul?

They're the ones who had two men not only promoting the mortal sin of sodomy standing in front of the parish before Mass, but also showing a little boy, Cohen, and doing everything they could to appear completely normal and routine.

They had the little boy conceived through IVF (mortal sin) and carried to term through surrogacy (mortal sin) because sodomy (mortal sin) isn't capable of bringing about conception or birth. The pastor supported them by not just approving of their presentation, but also allowing it to be posted on social media, no doubt to show just how wonderful gay life is and imply just how wrong and mean the Church is for calling all this sinful.

As you might expect, there was a huge backlash against the presentation, and Archbishop Hebda had to say he was meeting with the staff at the parish to "discuss" what went on. As an aside, everyone knows full well what "went on" and the discussion was not necessary.

Saint Joan of Arc is the sodomy parish. Lesbians and homosexual men are integral to the life of the community, although the community itself has no spiritual life owing to its heresy — a heresy defended by the pastor.

Heck, just two months ago, the city's Gay Men's Chorus performed there. After the meeting with the archbishop, the pastor wrote an "apology," which wasn't an apology at all. This is apparently Hebda's idea of the situation being "addressed."

Here's what the pastor, Fr. Jim DeBruycker, had to say, in part, in the bulletin after the meeting with Hebda:

Last week we had a wakeup call as we celebrated with a couple over their child's Baptism and how important it is to them to have a faith community. What was to us a simple celebration was parsed into a credal statement about every aspect of their life and the St. Joan community.

Part of the problem was this was put on social media and went, as they say, viral.

Yes, it happened from the pulpit, but before the Mass. It was not meant to be a dogmatic proclamation or a teaching and I am sorry for any who were offended by it.

It was us, SJA, celebrating with our parishioners. Just because the couple is gay does not mean we are promoting a 'gay agenda,' - whatever that means - any more than we promote every part of our straight parishioners [sic] 'agenda'.

We celebrate their presence with us as we do with all our community.

That entire thing sounds like it was written by a gay man offering a fake apology because he got in trouble for his evil agenda becoming so public.

For example, even after all this, he still calls the interaction between the sodomite couple and their IVF child — which means other children were killed — he still, even now, calls this a "celebration."

And he doesn't apologize for being wrong, he apologizes if you were offended, which is a usual tactic of leftists to lay the real blame at your feet. You were offended, sorry, but what I did or said was perfectly fine, good and moral. That's not an apology.

Of course, buried in all the leftist speak is the humdinger line: "Just because the couple is gay does not mean we are promoting a 'gay agenda'" — please, of course it does. That's exactly what it means and that's exactly what this heretic priest wants everyone to understand it means.

And here's the proof. What if the couple standing up there immediately before Mass were self-professed racists just looking for a faith community who could celebrate with them. See, swap out the sin and all of a sudden it's a whole different reality.

Saint Joan of Arc is known throughout the archdiocese as the gay parish. They have the local Gay Men's Chorus sing there and perform concerts. There is a vibrant gay "ministry" there. Their other speakers, because they have one every week before Mass and have had for years, are likewise gay or gay-friendly.

When the sodomite couple were done with their "gay is just like everything else" presentation, the audience went wild with applause and cheering. Yeah, the pastor's right, why would anyone think the gay agenda is supported there? Clearly, it isn't.

Just like not a living, breathing person would think they support racism if membership in the KKK was required to be in the choir or there were seasonal lynching presentations.

Come on, Father, cut the crap. You know darn good and well that you all support this evil. You are just too cowardly and full of deceit to come out and admit it, in case you actually had to work for a living and stop sponging off the faithful.

You wear a Roman collar but do not profess what that collar means, and you are so lacking in integrity and authentic masculinity that you do not have the courage to actually come out and own them.

You never get to support it. Children — other human beings — died, were willfully chosen, selected to have their lives brought to an end so that that gay couple could try and pretend to your malformed parishioners that they are normal.

They aren't normal. Men having sex with men is not normal, and you, Father, are a son of Satan to allow it, promote and backhandedly support it. Your parish is and has been for many years little else than a gay bar with pews — which brings us to the archbishop: Archbishop Bernard Hebda.

If what the pastor is doing is horrible and evil, what about the archbishop? The only reason the "gay agenda" pastor can get away with what he is doing is because Hebda refuses to defend the Faith and put an end to it.

This makes Hebda complicit in this filth, whether he likes it or not, agrees with it or not, as long as he allows it when he has absolute autonomous authority to bring it to an end immediately, he owns it. And he will have to give his own account to Almighty God for the destruction of souls that he has allowed.

See folks, this is the state of the episcopacy in the United States these days. The most simple, obvious steps that should be taken to end this malicious attack against the bride of Christ, they will not do.

In truth, there is no way in Hades Hebda has been unaware of this parish and its sodomy support. When he became archbishop, he would have been brought up to speed on all of it. So that realization begs the question: Is he only responding because of the public outcry?

Why hasn't he immediately diagnosed DeBruycker as being in need of psychiatric evaluation and ordered him shipped off to St. Luke's for six months like happens routinely if a priest anywhere in the United States tries to say a Latin Mass?

Hebda knows. DeBruycker knows. Everybody knows. And, Your Excellency, that includes God the Son, who you will have to give an accounting to when you die and be judged for your lack of fidelity.

Do you really think, Archbishop Hebda, if your grandmother was alive today and you told her, "Hey, Grandma, I have a priest that does not inform his congregation of the Faith, promotes sodomy, IVF and surrogacy and routinely pushes the agenda that men can have sex with men and women with women and I let him stay in place to further corrupt souls, lets them receive sacrilegious Holy Communion, is very hit and miss about offering the sacrament of confession" — do you really think your grandmother would say, "That's nice, Bernie"?

Come on, Archbishop. Do the right thing. Close it down. Close it down and put a stop to it, and for once, take a stand for the Church instead of worrying about your own rear end in this life.

My, these tentacles certainly do have a long reach, as Archbishop Viganò would say, tentacles strangling the Church. 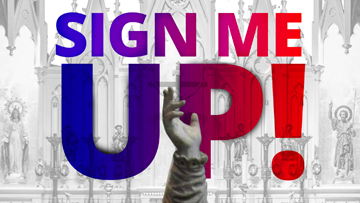