In the midst of all the bad news regarding the China virus, we should also realize that there are some good things emerging from all of this as well.

No one wants people to get sick or die, but since that is happening, we must also acknowledge that the response to the China-virus is secondarily creating some good news as well.

For example, in a number of states, Planned Parenthood and other abortion killing centers are being told to shut down because they are non-essential and are using up valuable medical supplies. Of course, the child-killers insist what they are doing is essential, so a fight is brewing there. But nonetheless, abortion is not health care and that is being exposed.

Likewise, the Party of Death's political nomination process has been thrown into absolute chaos and is even more uncertain than it was when there were 167 candidates on the stage.

Our Lady came to him and was in the room at the foot of his bed.

But what's most important, with so many people now self-isolating or being ordered to shelter in place, is that some are turning their thoughts to more introspective things — looking at family and relationships, but not just earthbound relationships.

As much as the Culture of Death — with its Marxist, atheist, abortion-giant cheerleaders — tries to downplay, ignore and scoff at it, religion is a natural virtue. It always has been throughout all of human history.  It arises in man because God Himself placed it there. The spiritual dynamic of man has never been able to be squelched, and in crisis times, it arises and re-emerges spontaneously, even if it may have been dormant.

People realize they don't have as much control of their lives as they think they do when things are going along fine. So this becomes a moment to speak to people of goodwill about this very thing — the need for God and truth.

Today, we'd like to present to you a video of a conversation we recorded between my father and me almost 10 years ago. My dad, who died a little more than two years ago, began life as a Protestant — Church of the Nazarene, to be specific.

He actually had studied to become a minister when he was around 21- or 22-years-old — actually studied at what had formerly been a Catholic college that none other than Bp. Fulton Sheen had attended.

We'd like to show you a few clips from the interview — give you something to think about if you're faith life is flagging, if you're considering becoming Catholic or if you'd just like to hear from a man of extraordinary goodwill why he became Catholic.

We conducted this interview roughly 10 years after my mother died, God rest her soul as well. A brief apology in advance: It's not the usual quality because the technology that we shoot on now is better than it was then.

My dad was a lover of the truth. The one thing he could not brook was a lie. So to him, as he heard Catholic truth, which is truth, he was drawn to it more and more. The primary difference, according to him, in the Church he converted into and the hot mess we have today, is the unwillingness of so many leaders to declare the truth, and sadly, even their own lack of supernatural faith.

The now lack of faith among leaders, their falling out of love with truth, has created a massive ripple effect — a destruction of souls in Catholic life.

So please pay attention to my dad's experience is not only coming to the Faith, but also in growing in the Faith. He was just a humble straightforward man, like many other men of his day and age — an era when truth was allowed to speak and men allowed to think.

As we talked about my mother's death and her faith, that no matter how horrible some things were and can be, playing in the background of my thoughts, as well as my dad's, was that one day, he would die. That happened about five years after this interview.

I can tell you, as quite a few of us here at the studio were around his death bed when he died, that Our Lady came to him and was in the room at the foot of his bed. He sat up and reached out to her and a moment later laid back down and went to her.

I had prayed earlier that day, not realizing in any way that that day would be the day he died. I prayed that since she had brought him into the Church Militant, if she would come and escort him to the Church Triumphant, or Church Suffering — whichever way that went — but that she would lead him to her Son's judgment seat and stay beside him during his particular judgment.

My dad knew what really matters.

Please click on the provided link if you would like to watch the entire interview. Since so many people are at home, they might actually have some time now — it's a little bit longer. I'm, of course, a bit biased, but I highly recommend it. 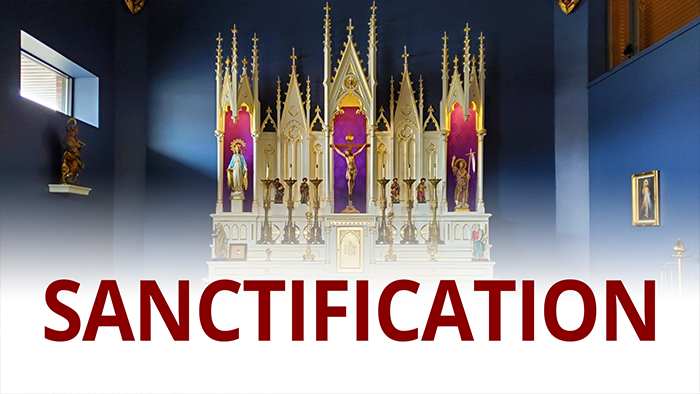 Sanctification
The goal of the Faith.