What’s in Your Head?

Because, it really DOES matter.

When you go inside the Holy See Press Hall for the daily press briefings, lots of questions arise — not about the press briefings themselves, but about the reporters sitting in the seats, listening attentively (presumably), taking notes, asking questions, writing their stories.

But they aren't robots or machines. They're human beings — human beings (like all human beings) who have a predetermined belief system, a values approach, a worldview.

For example, a believing, practicing Catholic understands that the Church is the Bride of Christ, the Mystical Body of Christ, established by Christ, the Incarnate Second Person of the Blessed Trinity, Who came to earth as Savior and established this Church as the sole means or vehicle of salvation, outside of which there is no salvation.

That view — which is true — creates the prism through which a Catholic reporter views, sees and understands all that happens in the Church, some of which is on display at these press briefings.

So what he or she writes or presents comes from that understanding — the understanding that this life is spiritual warfare, that there is a devil and Hell, and those forces are arrayed against humanity in general and the Church specifically.

The primary target of the demonic is truth, and therefore the Church is always being assailed since She is the bearer of truth — divine truth. No other body on earth has the sacred duty of announcing and bringing salvation to the world.

So the believing, practicing Catholic journalist reports always with that ultimate truth in mind. It is this paradigm from which his stories are scaled down. This is the "narrative," to use a contemporary expression which frames everything.

So given that reality, the question arises: What is the "narrative" of a reporter covering the Church who does not believe or practice the Faith? What is his starting point, his frame of reference?

So the actual content of the reports, in fact, the very topics chosen to report on, begin from an insufficient understanding of the Church.

Yes, they may contain factually correct information about this cardinal or that papal intrigue or whatever, but they will never, in the end, be anything more than the relating of some facts, arranged perhaps in some clever manner to convey a narrative — but the narrative will necessarily be incomplete because it began from the wrong starting point.

This isn't to say, by any stretch, that only faithful, practicing Catholics should be allowed in the press hall — far from it.

All we need to recall is the excellent work done by the Boston Globe in 2002 to uncover the 50-year-old Great Lie of the American episcopate: that a homosexual invasion of the clergy has occured and caused devastating results in the Church, to both minors and adults, and too many bishops were complicit in covering it all up.

What a way to go down in history — but that is the fate and epithet of their own choosing.

But even in that case, because unbelieving journalists do not, actually cannot see the larger spiritual dimension, the spiritual context of the story is lost and never reported.

The facts are correct (largely, anyway), but in the end the reader is left with just some facts. And the Catholic reader specifically is left with many questions.

This is why, ultimately, journalism, reporting by believing, practicing Catholics is not only good, but necessary. The believing Catholic journalist sees those facts, checks them, but then checks behind those facts to the much more important story, which is a loss of supernatural faith on the part of many in the clergy and hierarchy.

The non-believing reporter remains earth-bound in his thoughts, thinking that clerical celibacy or women priests solves everything.

The Catholic reporter understands that what has unfolded both begins and ends in the spiritual realm, and has just been evidenced in the temporal realm.

What's in the head of the reporter — his worldview — is what eventually comes out in that article or on that video report.

For the non-believing reporter, covering the Church is like covering the White House or a state legislature: lots of intrigue and power plays and "policy" decisions, but in the end, nothing more. They see the current fight over the Francis papacy in almost strictly political terms: conservatives versus liberals.

They do not, and truth be told are probably incapable of reporting on it from any kind of spiritual perspective, since they, sadly, have no understanding or appreciation of that world — at least professionally.

However, a good number of non-believing reporters have begun to sit up and take notice of the phenomenon of faithful, believing Catholic reporters and outfits, Church Militant being among them.

A few days ago, The Washington Post — in somewhat of a tip of the hat — acknowledged that more aggressive reporting in the Catholic media world is causing the needle to move. Reporting about the ongoing scandal in Buffalo and Bp. Richard Malone and the seminary, The Washington Post said, "Some said the expanding of a more aggressive Catholic media in the past couple of years has emboldened Catholics, including seminarians, to challenge the hierarchy."

That's true. Absolutely. And to whatever degree Church Militant has helped bring this new reality into existence, then blessed be God.

But the larger, more important story — again, the spiritual "angle," if you will — is: The idea is not to just get Catholics to challenge the hierarchy, but to call the hierarchy back to their sacred duty to be true shepherds.

That angle you will not hear from unbelieving reporters because it's never on their radar. Outfits like Church Militant, for them, are always operating out of some political agenda, or alt-right media empire-building plan or whatever.

It really does matter for reporters the answer to the question: "What's in your head?" 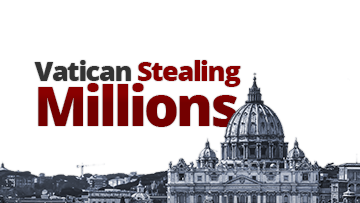