Surveying the wreckage that is the Church in the West, a normal person would ask himself, "What's left? Really, is there anything still here?" Well, yes and no.

The Faith as it once was lived out — carried ashore by missionaries and legal immigrants — over the centuries, that's pretty much gone. There are certainly pockets (and they are growing), but at the present moment, the Church of Nice — which is in a death spiral — still has the numbers (not to mention money and buildings) on its side.

It doesn't really have the Faith, but it does have the material wealth needed to hang on for at least the current crop of crooked bishops to go to their graves. How much longer beyond that? Well, good question. Odds are — the smart money says — not too terribly long after they all die; give it five years, maybe 10 on the outside.

Now for the other side of the ledger, the increasing Church — the one that the likes of Bp. Robert Barron mislabel as "traditionalists."

They aren't as much traditionalists as they are orthodox, like Church Militant. We've never claimed to be "traditionalists," but we absolutely stand on (and die on, if necessary) our orthodoxy. In fact, the squishy term "traditionalist" doesn't even seem to have any kind of agreed-upon definition.

To some, it means being a sedevacantist or a member of the SSPX cult, with its ties to Nazism and sex abuse cover-up. Still others think it means simply an adherence to the traditional Latin Mass and nothing more.

So when Barron tries (and fails) to lump all non-Church-of-Nice Catholics into the "traditionalist" basket, he really reveals his complete ignorance of the current landscape in the Church.

But whatever traditional means to whoever, no one is confused over what orthodoxy means. Unlike "traditionalist," orthodoxy actually does have a definition: It means "true teaching."

Church of Nice supporters wouldn't know orthodoxy if it was a dog and bit 'em.

Church of Nice supporters wouldn't know orthodoxy if it was a dog and bit 'em. Many of them have spent decades at this point being lied to (or actually, better stated, subtly deceived).

It originated with the modernist bishops and their seminary faculty back in the 1960s and 70s and moving forward. Those men — the ones who taught the current bishops when they were just little gay seminarians — those men instilled the corruption we see today now exploding all over the Church, like time bombs going off everywhere.

But just like no explosion wipes out absolutely everything, so too the modernist bomb that went off didn't reach every last soul. Some survived. Some, true, were wounded. Some were deeply wounded, but not everyone was killed in the explosion.

Some of the survivors and their children are now beginning to comb over the wreckage and are finding it has become the haunt for greedy old queens and careerists in miters. Unlike the families they destroyed, they personally profited from the destruction.

In fact, they have deluded themselves into thinking that the Church burning to the ground is actually some kind of improvement, a progressive triumph. Holding hands during the Our Father like half-witted Protestants, that's what these misguided Catholics who don't really know what being Catholic is have been told: Hold hands, wave at each other, enjoy fellowship, have a donut, listen to Fr. Gay tell a stupid joke and then go on about himself (in a womanly voice of course).

This is the Church of Nice on full display: A body of people who don't know what they stand for, so they will fall for anything and accept anything. A recent National Review article last week pointed out this about Kamala Harris:  "She embodies the future of American religion: In a time of expanding religious pluralism, the country's younger generation, many of them children and grandchildren of immigrants, will recognize in Harris a kind of multi-faith and spiritual belonging unfamiliar to the mostly white Christian majority of past decades."

That's true. In fact, the article title called Harris "the future of American religion." Hard to argue with it. In fact, all that nonsense of being spiritual and accommodating of a multiplicity of faiths, that all began in the Catholic Church under the crooked bishops.

It's still carried out and going on now by just the newest crops of crooked bishops. If that's not bad enough (Kamala being the future face of religion in America), the National Catholic Reporter — the heretical paper — went so far as to say that Miss Green New Deal herself, "AOC," is the future of the Catholic Church.

They actually missed the mark. AOC isn't the future, she's the present — a phony Catholic "committed to social justice" but really committed to herself. Again, like Harris, AOC has the U.S. bishops to thank.

Stop listening to a bunch of crooked bishops who helped rain this evil down on your heads.

None of this would have been possible without the meltdown of the Church. And don't think for a minute the meltdown was by accident. It was deliberate from the very first moment it came into focus. But where we are here is where we are.

All that can be done now is prepare for what's coming. And consider, even if the election swings Trump's way, what do you suppose will be the case in 2024? Trump is a singular force — really unrepeatable.

He has only slightly more in common with the Republican establishment than he does with the Democratic establishment. Both hate his guts because he calls 'em like he sees 'em. And he's usually right, even if he gets a little Twitter happy. Who cares?

To both sides, orthodoxy is the evil that dare not speak its name. The frightening thing is that the Church of Nice and the theological Left (and there isn't a lot of sunlight between them) are pretty closely aligned with the actual Marxist Left. And they too, having Satan as their father, likewise hate orthodox Catholics.

The growing band of orthodox Catholics is going to have to make some choices in a few months or a few years. But the choices are going to have to be made. The world will be less and less hospitable to you and to us, and then it will turn violent against us all.

Who knows how all this will unfold? But you better start preparing. State of grace, prayer life and sacraments. Stop listening to a bunch of crooked bishops who helped rain this evil down on your heads. There's not much left, really. Except you. You can still be pleasing to God. So get on with it. 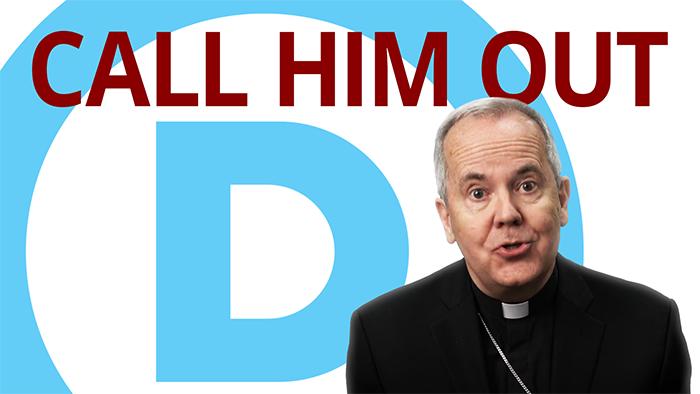