It is the question.

If someone would have said to you, say, 30 years ago, that America would be on the verge of becoming communist in the new millennium, you'd have laughed in his face.

But that is directly where we are heading. And if you think that's an exaggeration, let us take you back two years to President Trump's 2019 State of the Union Address. While the GOP members of Congress were cheering "USA, USA," the Democrats, typified by Bernie Sanders, simply sat there stonefaced.

What the glib Republicans were either unaware of or were unwilling to come to terms with (understandably, because it's quite horrible) is that the plans to convert America into a communist State were already well underway. And now, they are in full tilt.

Trump's speech was, of course, before the COVID world that provided the opportunity for the Marxist Democrats to steal the election and virtually cement their plans. But none of this is actually new; it's just new to some people. It's been going on for decades — for more than a century, actually.

And if you aren't "woke" to Marxism taking over the United States by now, well, this Vortex isn't going to convince you. But there is one point that gets overlooked by almost all political conservatives, even good Catholics among them: The groundwork for the Red Threat was laid in the Catholic Church first. It was called "modernism," which was aptly defined by Pope St. Pius X in his 1907 encyclical, Pascendi Dominici Gregis. He called it "the synthesis of all heresies."

The groundwork for the Red Threat was laid in the Catholic Church first.

Unsurprisingly, it was born in the same land where Marxism was born, and, beyond the geography of Germany, there are striking similarities — the main one being atheism. And make no mistake: If you encounter a modernist cleric, you are dealing with an atheist. Actual or practical, he is an atheist.

What do we mean by "practical atheist"? Quite simply, in all practical terms, in the day-to-day practice of his life, he conducts his affairs as if there is no God. Here is the civilizational alpha/omega: When atheism invades the ranks of the clergy, the culture will crumble.

There are, of course, a number of steps in between, and it takes a while to unfold, but the trajectory is clear and indisputable — the civilization is over. America is currently in a transition phase. What we once were is gone. Where we are heading seems pretty clear. But the question is this: "What's next?"

It's clear there are two Americas, two worldviews that have already collided, and one has essentially won or is very close to having won. This state of affairs in the political realm has been brought to you courtesy of the collapse of the Catholic Church as the guardian of human dignity on its way to its everlasting destiny. And that was brought about by modernism, the amalgamation of what amounts to atheistic denial of divine truth being passed off as enlightened thought.

For example, one of the huge earmarks of modernism is the denial of the miracle accounts in the gospels. The so-called scholarly approach is called "historical criticism," and it begins with the presumption that miracles do not happen, so any passage that relates some kind of miracle simply means something else.

It is an effective denial of Our Lord's divinity, and this is the first time we begin to see a a strong movement in the Church that takes the emphasis off Our Blessed Lord and puts it on the community. As this thought that began in the Protestant universities in Germany began to first seep in and then be embraced by Catholic scholars and houses of formation, it had disastrous impact on the life of the Church as lived by everyday Catholics.

It became a subconscious theme throughout the entire life of the Church. Tradition was not only dead and to be ignored, but was, in some ways, distorted. What was "modern" was the result of thought and reflection of the Church, and it clearly marked the path moving forward. Of course, what was "old" were ideas like Hell, damnation, guilt, responsibility, sin and so forth.

Once the Church discarded these "antiquated" concepts, then the world, which never really embraced them, was more than happy to celebrate the Church's "enlightenment." So instead of pushing back against the world and trying to convert it, the Church actually went along with the world.

At that point, it became a race to the bottom as generation after generation, encouraged by a malformed and corrupt clergy, kept allowing more and more evil, eventually promoting it. And now, we are here, on the precipice of the end of Western civilization, fashioned out of the ashes of the Roman Empire by the Catholic Church. That civilization, as it was formed, admitted to sin, guilt, damnation and so forth. It did not excuse man's fallen nature and sinfulness. It sought to convert it and baptize it on the way to Heaven.

Now, what's left of it is providing the fumes on which the West is just skating by — for now:

All of these — and all the consequences that fall from them in the political arena — all of these were brought to us by Catholicism. But when Catholic leaders distort these truths and throw their lots in with those who eradicate these truths, then there is no safeguard left.

The world, collectively, has lost its touchstone to the Divine, and it is the Catholic Hierarchy that is to blame.

It is the temple that first needs purification, and since the priests of the temple have betrayed the temple and the worshippers, then God Himself will have to purify it. Think how far we have descended as a nation and, especially, as a Church in just the two years since Trump gave that speech. No matter his intent, Trump was wrong in his assessment about America never becoming a socialist nation. Even he was caught off guard by the state of affairs just under the surface. It cost him the legitimate victory.

But most importantly, the world, collectively, has lost its touchstone to the Divine, and it is the Catholic Hierarchy that is to blame. Yet, even now, they persist in their wickedness, caving in or carrying the water for the enemies of Christ on a wide range of issues.

"What happens next?" is a question that should concern every single faithful Catholic. We are called to witness to the truth of Christ. What form that witness will be taking is the thought on the mind of every believer. 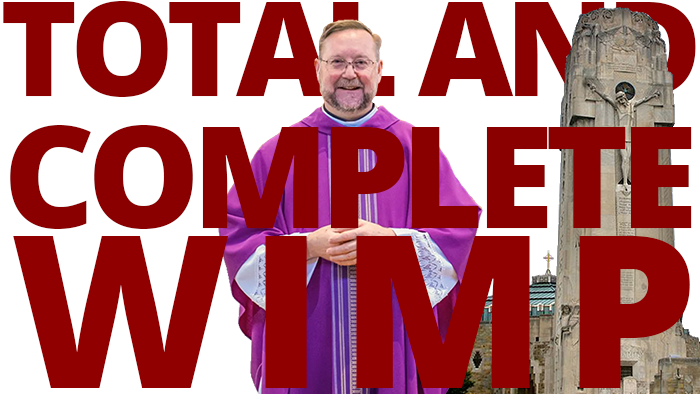