Which One Is Better?

It ain't the commies, and it ain't Pachamama.

There's a lot of the ol' switcheroo going on in Rome right now — a lot of double-talk and self-contradiction.

For example, let's talk about this clash of cultures — or worldviews — which is taking center stage at the Vatican. It's a kind of class warfare being perpetrated, lifted right out of Saul Alinksy, commie-type methods.

The Party of Death here in the United States is extremely adept at this; it's actually their bread and butter: Wage class warfare. The same principles are flying around the Eternal City these days as well.

When it comes to the Amazonian culture, it is presented as this nearly perfect, sacrosanct, ancestral wisdom, millennia-old "people of the forest" culture that must be respected at all costs — even the cost of the Faith, apparently.

Yet jump just one continent to the North, and the culture of America is spoken of with zero respect, greed and hyper-capitalism producing massive changes in the environment that requires less people to be born to reduce carbon emissions — you hear it non-stop.

Translation: America, bad; Amazon, ideal — so much so, in fact, that the Pope said he's kind of down with Americans attacking him; it's sort of an honor; he welcomes it.

America is in need of profound change — the Amazonians, not so much. Now the issue isn't that America doesn't need profound change; of course it does. There is much truth in the view that greed and self-centeredness is prevalent in the United States.

The problem is that America is singled out by this pontificate as the "Great Satan," and virtually any other and every other civilization or culture is better.

It's OK to blast America, but don't dare speak any word against the culture of the peoples of the forest. All hail Pachamama and their fertility goddesses!

This synod, with its complete lack of clarity, seeming love for confusion, endless diatribes about ecological theological integration with trees and Mother Earth has become a caricature.

People running around Rome adorned in feathers and face paint, liberal nuns seeing the opportunity to advance their desire to actually be men, Marxist cardinals with no faith rambling on about faith, the whole thing is a disgusting comedy.

All the while, anything previous is mocked and marginalized, from traditional clerical clothes to a culture which has lifted more people out of poverty than the entire history of mankind, to the notion that we need to actually convert people to the Catholic faith.

This is the point of convergence on the Left between theological perverts and political perverts.

They see America as the great roadblock to their goals for advancing globalism, and they see actual Catholicism as part of that giant roadblock.

So the United States must be attacked and shamed, while any and all other cultures must be praised and elevated.

Likewise, any "version" of Catholicism must be venerated and celebrated and elevated — except traditional Catholicism.

From the point of view of the communist Catholics ruling in the Vatican today, America and traditional Catholicism are essentially the same thing, two systems which do believe in exceptionalism as it applies in their respective worlds.

And the major push for a restoration of the Faith — the actual, honest to God, bare-knuckle faith of our fathers, crush-the-diabolical-underfoot Catholic faith — is all coming from American Catholics.

It's the only game in town, so to speak. Faithful Catholics all over the world are looking at American Catholicism as the great hope.

It's why the Pope and various cardinals and so forth are constantly belittling either America, or traditional Catholicism — or both.

It's why sitting in the press hall at the Vatican, so much leeway had been given to the liberal anti-American, anti-traditional Catholicism crowd of reporters.

After some direct complaints, that seems to have modified to a degree, with a greater share of reporters being called on for questions. We'll monitor to see if it continues.

The underlying issue is pretty simple here: for decades, in American politics and in Catholic theological circles, the liberal-commie-socialist bloc did a very decent job of stealthily inserting itself into all aspects of the given scene and quietly gained control.

Now that it has been exposed just how much control they had clandestinely seized and the direct fight against them has begun, they don't like it. The same dynamic is driving Trump derangement syndrome here in the United States.

His 2016 "Make America Great Again" slogan was like nails on a chalkboard to political liberals and traditional Catholics push to make the Church great again may as well be the screech of demons to commie Catholics — if they actually believed in demons, that is.

This is what's hidden behind all the talk of "inculturation," bringing the Amazonian culture into the Church, making the Church have an Amazonian face.

It's a load of hogwash. As long as the Church doesn't have the face of the bride of Christ, they don't care what face it is.

The Amazonian face is just the most useful tool in the box right now.

There is a superior religion, the most superior, not because of the people who profess it, but because of Who established it.

When it comes down to "inculturating" Pachamama into the Church, the old gal can just take a hike. 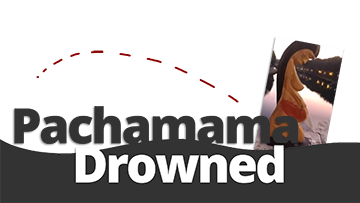 Pachamama Drowned
As it should be.