Search him out and destroy.

For those who have been politically or culturally asleep for the past 40 years, the Left — which is to say, godless communists disguised as do-good social justice socialists — have been hacking away at a number of categories that must be destroyed in order for them to prevail and impose their tyranny on the nation.

One category is race — if you are white, you are bad. You enjoy white privilege. You belong to a class that is horrid by nature and must be overthrown.

It's interesting and telling that in almost every assessment of the Brett Kavanaugh controversy that media have singled out that all eleven senate judiciary republicans are white. Race has nothing to do with this story. Every single person involved is Caucasian, yet there it is: old white men.

Then we, of course, get the charge of being conservative, which means right-wing, alt-right, extremist. And we all know extremism is bad. Being labeled an extremist is the worst possible thing, but only if you are a conservative extremist.

Planned Parenthood extremism is perfectly acceptable because, well, it's not conservative. In all of this, we need to make sure and lump in being straight — or heterosexual — because, again, that's bad. Heterosexuals are unfeeling, non-compassionate by nature, and heterosexuality being opposed to homosexuality by nature makes it automatically bad.

Christian — or in the case of Brett Kavanaugh, specifically Catholic — is tantamount to complete unacceptability by the Left. It is, after all, Catholicism which built Western civilization — that heterosexual, patriarchal, politically conservative, Caucasian empire of evil that must be dismantled however possible.

And the coup de grace of the entire war — Kavanaugh is a male — which means he must shut up and sit down and not talk, and likewise with any men who defend him or even question Blasey Ford's claims that with each passing day become less and less believable.

Damn the facts — he's a man, a male, and he is, therefore, wrong and must be disbelieved and belittled. And when you add in that he's a white, conservative, straight, Catholic male, well this is simply intolerable. He must be destroyed.

In today's political and social climate — created and helped along by the diabolical — whatever is masculine is evil. Men must be reduced to sniveling mama's boys who have been socially castrated. It is a case of toxic masculinity to confront.

Truth cannot be asserted if someone's feelings are upset. The entire world exists so that the feelings of radical feminism can be affirmed. When you take this template and lay it across what’s going on in the Church, it causes much to come into sharp focus.

Why has the Catholic priesthood been so devastated? Precisely because truth has been replaced for feelings, and this has been pushed by the homosexualist crowd so they don't have to face the truth of their own sexual depravity. It cannot be and should not be surprising that what is happening in the culture is happening.

What evil happens in the culture first happens in the Church because the Church is the only body on Earth with the supernatural mission to fight and destroy evil. All man-made institutions and bodies will fail sooner or later because they were not established by God — only the Catholic Church was.

So this rejection of heterosexuality and masculinity, of conservatism and faith, that we see so evidently on display in the Kavanaugh case, has been able to reach this point exactly because it has already been happening in the Church for decades.

Too many Catholic leaders have acquiesced, have given into the shrieks of radical feminism simply because they have become more feminine than masculine themselves. They no longer have a touchstone to that which is masculine, so they flounder about, grasping and groping for something to seize to stem the tide of destruction of the Faith.

Many of them are massively effeminate; most have been emasculated; all of them practically speaking are at a loss to do anything to restore the Church. This is why we see the victory of radical feminism's tyranny because too many men have refused to accept the mantle of suffering and sacrifice which is part and parcel of being a man.

If this all sounds familiar — just look at what happened in the Garden of Eden: A radical feminist bullied a cowardly man, and here we are today.

Men, especially white, conservative, straight, Christian men, need to pick up your heads and realize how you are being demonized — just turn on a TV and watch. 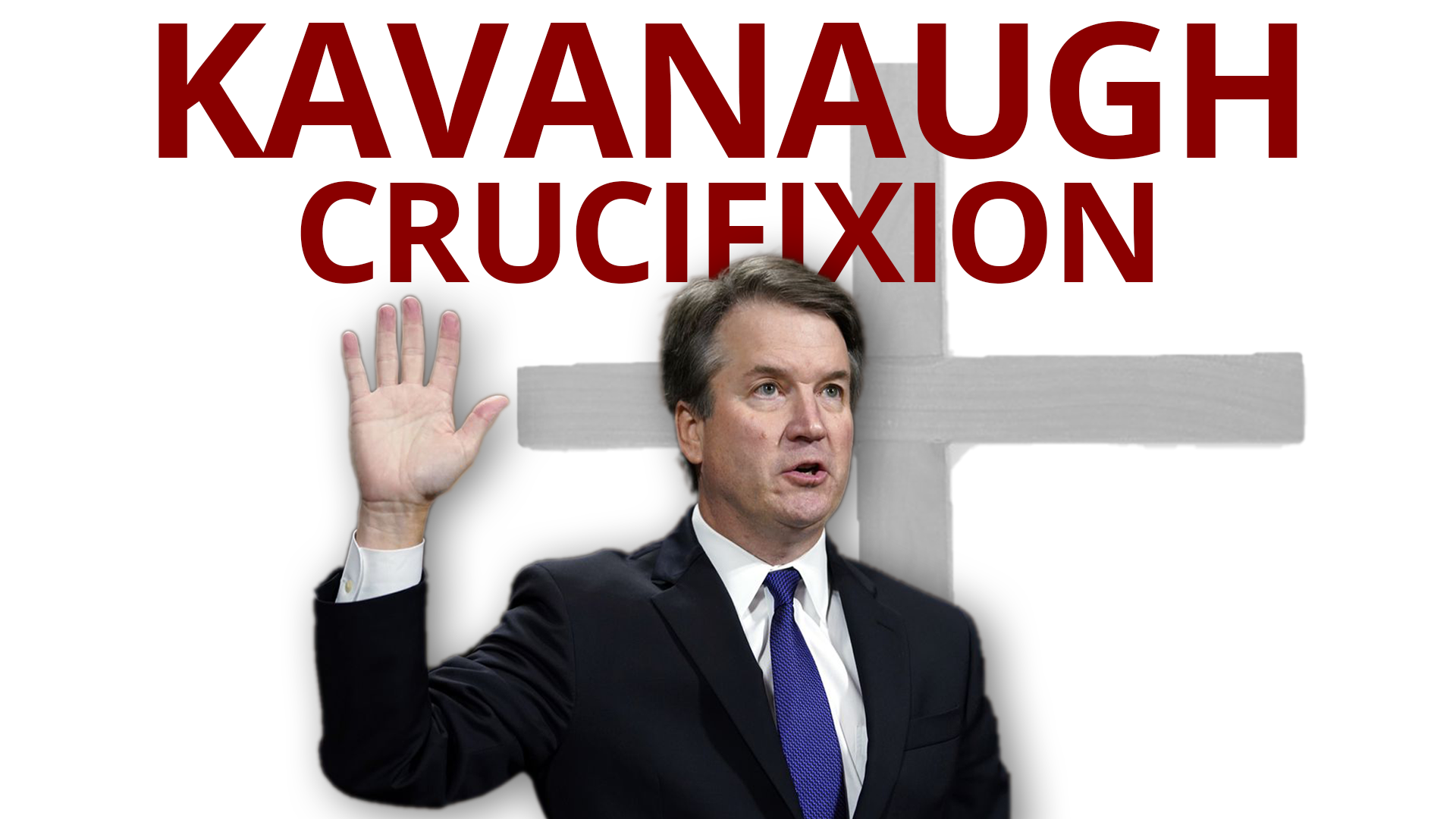 Kavanaugh Crucifixion
The demonic is stalking the halls of the United States Senate.