When you walk anywhere around the Holy Land, you will see, of course, Jews and Muslims and Orthodox and Catholics — both Latin and Eastern-rite Catholics.

It was not Protestant blood spilled here in the Crusades fighting back the evil of the Muslims attacking Christian sites 1,000 years ago.

It was not Protestantism that was driven out of Jerusalem by fanatical rabbis in the first century of the Church.

It was not Protestants who stood and fought the heresies attacking the divinity of Christ.

It was not Protestants who were commissioned by Christ to go and make disciples of all nations.

And it was not Protestants who built all the churches and shrines over every single holy spot in this land.

Every one of those acts was done by Catholics.

Last week, when we were in Galilee, we ran into a small tour group of Protestants from the Foursquare Church in Alabama.

I politely said to one of the ladies, "It must be strange for you all to be here, seeing as you have no history here."

She said, a little stunned I think, that they all loved Jesus and that's all that mattered.

I said back to her, respectfully, "No, that's not all that matters. Jesus founded a Church — the Catholic Church — and that is how you deepest access to Him. Everything else is incomplete."

And the bottom line is this, that's incredibly sad. I didn't know that group from Adam. They could have all been pro-abortion, contraception-supporting Democrats for all I know. But they didn't seem to know even the history of the land they were standing on.

When we were in Capernaum, in the synagogue where Our Lord preached on the necessity of eating His flesh and drinking His blood, I heard a minister from what seemed like another Protestant tour group not even seem to know the significance of the very spot they were walking through.

How terribly sad. Why don't they know this information, Catholics? That's a question aimed right at you.

How can so many people who think they follow Christ be completely devoid of knowledge of even the most rudimentary history of Him, even on the very dirt He walked on for 33 years?

That has to come back to us at some point — how caring, how loving, how direct have we been in telling them.

Shame on us for allowing so many fellow Christians remain so ridiculously ignorant of the truth of the Christ they claim to know and love, but really and truthfully don't know and, therefore, can't really love.

A person cannot love what they do not know. And yet, as the Ethiopian eunuch asked Philip the Deacon, how could he understand if no one bothered to explain it to him?

He was referring specifically to the Scriptures, but the same principle holds true for knowledge and love of Christ. There are many men and women of good will who simply have false or incomplete information about Christ.

There are all sorts of men and women who love their idea of Our Blessed Lord but are just mistaken in their perception.

But, they have the good will to cast aside their misperceptions and erroneous thoughts if someone would only explain the full truth to them.

That's one of the reasons we are here producing this documentary on the Eucharist, to help further explain the full truth of Our Blessed Lord for those who have not really heard it, be they poorly formed Catholics or misinformed Protestants.

Good will is the key.

You know, it was just over there, in that sky above Bethlehem, 2,000 years ago, on the first Christmas night, that the angels sang out, "Peace on earth to men of good will."

There are many people, many Protestants, of good will who would be more than happy to hear the fullness of the truth, even now, when there is so much madness in the Church.

Sure there are some who do not possess good will, but the same can certainly be said of many of the successors of the Apostles these days as well.

What matters is bringing as many souls to Our Blessed Lord as possible, and that duty — notice the word "duty" — is incumbent on every Catholic.

You may be the only one in a given person's life to be able to introduce a soul of good will into a deeper relationship with Our Lord and His bride to show them the deep importance of receiving the Eucharist, the actual body and blood of Our Blessed Lord, as He Himself commanded.

To underscore the vital point here, Servant of God Fr. John Hardon once said, "Any Catholic who is not about the business of evangelization might never entertain a serious hope of the Beatific Vision."

How can any Catholic go up and receive Holy Communion week after week — sometimes day after day — and not open himself up to bringing other souls to Christ?

This is where it all began, right here, with the sacrifice of the God-Man, a continual everlasting sacrifice by the high priest who forever makes that same sacrifice on our behalf to the Father.

It is one sacrifice, realized in time over there on that hill but, in reality, continuing for all eternity.

The Eucharist compels us to declare the full truth of Christ, because the Eucharist is Christ who desires to be fully known. 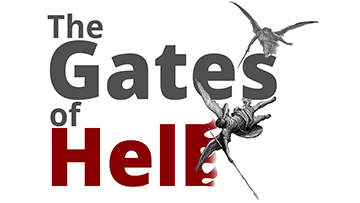 The Gates of Hell
Shall not prevail.