Witness to the Truth

Fight for the Church.

I'm Michael Voris coming to you from Rome with a simple message: If you call yourself Catholic, you need to witness to the truth and get in the fight. The mauling, the mangling that Holy Mother Church has gone through is atrocious. It's been going on for half a century.

She has been so disfigured by leaders that the world no longer recognizes Her holiness, Her uniqueness. This must end, and the leaders, too many of them, simply do not care to bring it to an end.

Many them as you know are actually complicit in bringing this ruination about. Somewhere back up the line, for a variety of causes, many of them completely disengaged in the work of fighting for souls.

Both of these camps have active homosexuals within their ranks. Sometimes the homosexuals are wedded to the ideological causes of the above groups, sometimes they're just all about the sex and easy life.

And sometimes, the homosexuals prey on youth, and that's where all of it all comes out into the public, and the plans of the devil get exposed.

For all the blather from bishops in the United States about how great things have been with regard to minor children not being raped by clergy any longer — which is true — think about the nightmare that claim is.

True, once the media exposed what the bishops had been covering up for decades, and lawsuits cost the bishops $4 billion — yep — they sure did straighten up and fly right. And all it took was being lambasted for years in tens of thousands of stories in the secular media and going bankrupt.

The idea that Catholics are supposed to take some solace in that is absurd because the truth is, the evil has simply shifted. The area of minors being sexually assaulted has diminished, but the assault on young adults and the accompanying non-response as well as the perversion of the priesthood has continued unabated.

See, the rape of altar boys by priests was always just one symptom of the much larger issue of what has happened to the priesthood and the episcopate. It's just that it got a lot of attention from the media and the courts — deservedly — so in these cases, the bishops had to act.

But 16 years later, here we are again, still with a twisted crop of clergy like James Martin and all the rest of his homoclerical supporters who, while not necessarily advocating for child rape or covering it up anymore, are still content to assault the faithful spiritually.

And for the record, as wicked and damaging and hurtful as the physical assaults have been, the spiritual assaults are far worse. But since the media doesn't care to report on homosexual priests and bishops having "consensual sex" with each other or with non-clergy, there's not been a push from within to change this evil behavior.

There are no headlines and no lawsuits and no huge loss of funds so no big deal — business as usual. But there is a loss of truth and goodness and beauty. The spiritual raping of the faithful by these wicked men needs to be called out and change must be demanded.

Perverts and Freemasons and the heirs of communist sympathizers cannot be accepted into the seminaries or appointed to positions of influence in the Church — period.

There is very little hunger among the more senior clergy in the Church to bring about any of this change because, indeed, they are the problem. Many think there is nothing wrong with homosexual men in their ranks, many of them are homosexual themselves so no surprise there.

There are undoubtedly a few homosexual priests and bishops who manage to live chaste lives and maintain teaching orthodoxy, but they are still damaged goods because they will not stand up as men and defeat the evil within their own ranks.

And they are outnumbered, making the challenge even greater. They are perhaps afraid they will be outed by fellow clergy who "know about them" from their days in seminary when they were a little less guarded.

They are perhaps a little reticent to stand up and declare the truth, feeling a touch of hypocrisy, even though they themselves have kept clean. They may perhaps be sympathetic to fellow clergy who have not been chaste, willing to give them the benefit of a doubt.

The point is this: The homosexual bishop — even the chaste ones — sees the world of the Church through the lens of his homosexuality. He either accommodates it, makes excuses it for it or downplays it. He will seldom if ever call it out, within his own ranks, among his brother bishops.

They all know it, and no one says anything about it, so you have the ridiculous situation of a Cdl. Cupich — and many others — blaming everything on clericalism and actually denying any of this evil is related to homosexuality, while everyone on Earth knows better.

Even Newsweek magazine's religion editor for almost 40 years, Kenneth Woodward, came out and said it explicitly in a recent article in Commonweal magazine — it's a homosexual problem.

Commonweal is a typically liberal magazine, and even they publish it. Everyone knows this and says it except the bishops — and the Catholic establishment media.

If Woodward and Commonweal say this publicly, isn't that worth at least one investigative piece by the establishment Catholic media?

Not because we hate gays and are homophobes — a psychological condition which doesn't even exist — but because we love the Church and are all witnesses to the truth.

Look at this picture I took on my phone the other evening strolling back from dinner.

This is what so many of us want to see, the glory and beauty and majesty of the Church. We want it restored. We want this brought to the forefront again. We want this to be what people see when they look at Our Mother.

We want them to see the truth — that She is established by the Son of God to lead souls to eternal life in the Holy Trinity — to live forever with our families who shared this same faith with us here in the Church Militant on Earth.

None of us — and there are many good people fighting this fight in Catholic media, faithful media — none of us are in this for the money or the headaches or anything else except the salvation of souls through the Holy Catholic Church.

All this, every bit of it, must be challenged, this rot, this filth, this wickedness — all of it — because it obscures the glory of the Church, the Bride of Christ.

Our Blessed Lord will save His Church. The question for each of us is, will I be able to stand before Him at my hour and say, I let you use me to help do so?

Fight for the Church — with everything you have. Fight for Her. Be a witness to the truth. 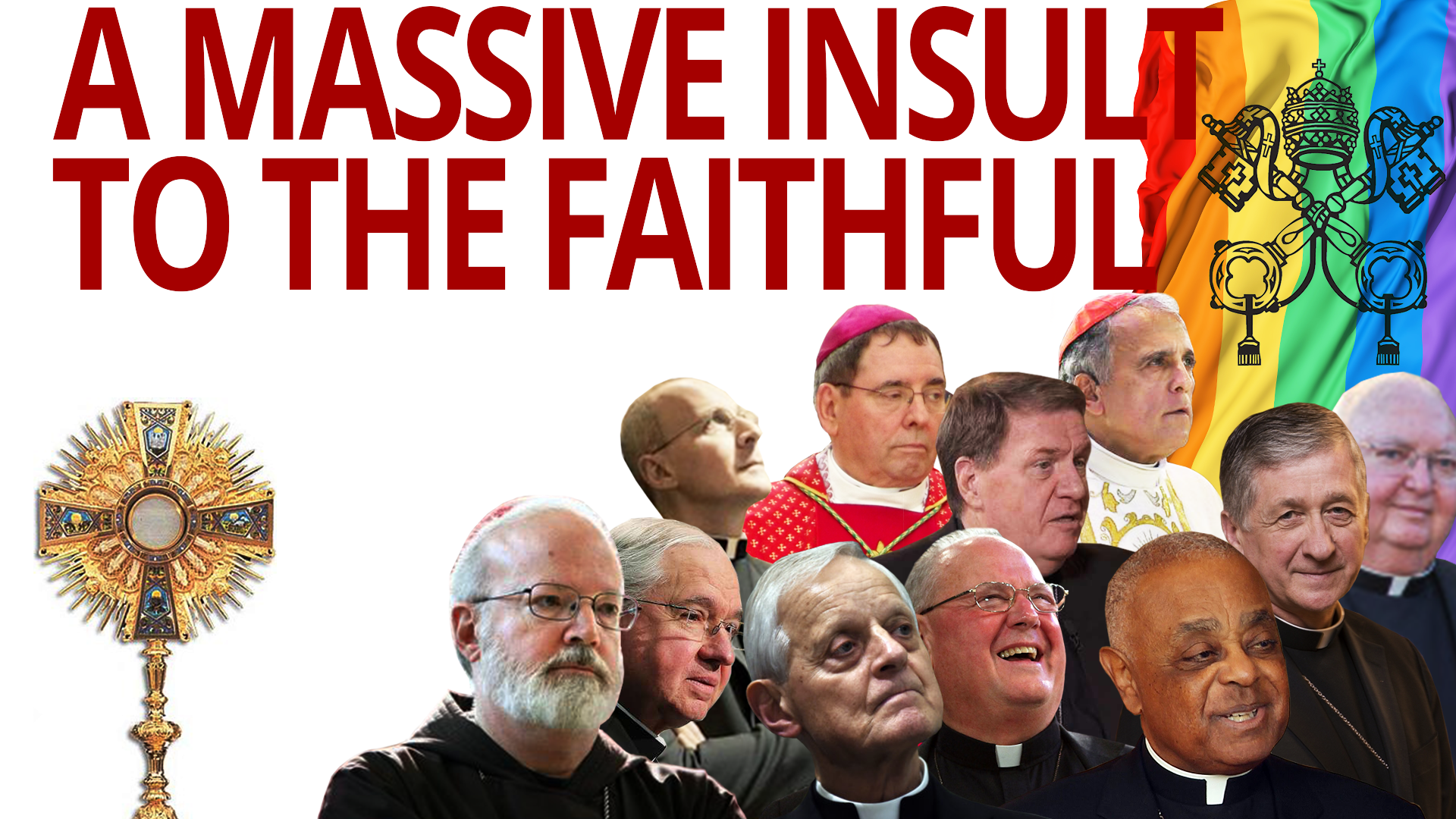 A Massive Insult to the Faithful
Could a bigger insult be leveled against the faithful?