And their soft gay clergy.

If you ever needed proof that nearly all vestiges of authentic masculinity have been drained from the clerical state, look no further than the bishops and their abysmal handling and cover-up of the homopredators within their ranks — and for clarity, we aren't talking about preying on minors.

We're talking about the preying on of souls by this wicked bunch, and the refusal of bishops who are not homosexual themselves, to do anything about it.

They will not stand up and call out this filth, and to be completely honest, no reason they have dreamed up under their miters is an adequate explanation.

What bishops will tolerate these days is putrid. The manly spirit has long since left most parishes and chanceries.

For the most part, old, liberal women run the show — the leftover "Woodstock Women" who refuse to accept the teachings of the Church because they see them as enslavement by a patriarchy of old men.

Back in their heyday, they were burning their bras with Gloria Steinem and Betty Friedan and stomping around bellowing out Helen Reddy's 1971 "I Am Woman."

Today, they are burning down the Church, and the sissy emasculated bishops are letting them do it all over the country. It is not an understatement to say that there is simply a crisis of masculinity today in the Church.

The masculine has been subverted by gay clergy, who do not know how to identify with anything masculine.

They are perfectly at home with the Church Lady crowd, just as the vast majority of gay men outside the Church have no substantive relationships with straight men.

This is the dominant "culture" in the Church these days, effeminate homosexual men in league with the old Woodstock Women, and the few remaining authentic men in the Church want nothing to do with it.

It's a turn-off, revolting, to watch a man cede his masculinity to his "softer side" because that is what the old liberal gals insist on.

Everything in most parishes today reeks of the feminine — and not in a good way. It's pervasive and dripping with effeminacy.

No homilies, no bulletin articles, nothing can be said, preached or written which confronts this dominance of radical feminism with its death grip on parish life.

Just look at the nightmarish scene which unfolded in the archdiocese of Portland a few days ago, when a tradition-minded (read: patriarchy) African priest Fr. George Kuforiji went to St. Francis parish and ran headlong into the old liberal SJW women.

He made it clear he was going to introduce actual Catholicism back into the parish and Mass, and the old bra-burning brigade was having nothing of it.

Those yelled and shouted during Mass, drowned out his homily and intercessions and sang civil rights protest songs, missing the irony that who they were accusing of "attacking" them with orthodoxy was a black man.

But his color didn't matter as much as his sex — black: sometimes good; male, as in authentic masculine: never good.

And it has gotten to this point because, by and large, the bishops who allow it are homosexual clerics who also hate almost everything masculine.

They used to be priests — some in parishes, some in chanceries — but wherever they were, they were formed by the Helen Reddy Catholic set of radical feminists.

Homosexual men do not know how to relate as men with other men — it is the defining trait, in fact.

That's why they are always drawn to things feminine — be they careers, social gatherings, interests and so forth.

Together, hand in hand, the Catholic Woodstock Women and the gay men who were ordained have almost totally transformed the face of the Church in America.

And practically no young red-blooded American male is going to want to have anything to do with it.

Most parish youth groups are dominated by girls, or girly minded boys who are the unfortunate victims of this toxic atmosphere.

The senior leadership of the Church — the Wuerls, the Cupichs, the Dolans, the Tobins, the Farrells — all of them have engineered this outcome because they refused to be men and confront the evil of the world as it poured into the Church and claimed tens of millions of souls.

There may be about 17,000 parishes in the United States — down by the way from almost 20,000 a few years back — but most of them are not places where a robust, muscular, masculine presentation of the Faith can be found.

But if it's garden parties and Oprah-like feelings chats you want, well, you've come to the right Church. 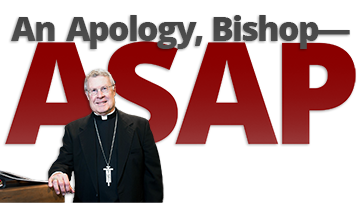 An Apology, Bishop — ASAP
False ecumenism is scandalous, as well as sinful.