The idea for this apostolate, St. Michael's Media — of which Church Militant is the website — came into existence in late 2005.

I had originally conceived it as television studio which would produce a weekly local Detroit market TV program called The One True Faith.

That idea came about because that was the year The Da Vinci Code nonsense was running rampant throughout the whole country, that Our Lord and Mary Magdalene were a couple.

The 2003 book was everywhere, and in late 2005, the movie trailers were already running for the box office version.

So I told my dad that somebody somewhere had to step up and defend the truth of the Church and Our Lord from this filth.

And that, in a nutshell, is how St. Michael's Media came into existence. We were only ever supposed to be little, hour-long weekly TV show playing locally here in Detroit.

In those early years, none of us here had any idea of just how filthy and corrupt most of the hierarchy was — and is. But given how we were attacked and vilified by this archdiocese — our own here in Detroit — it didn't take long to know something was wrong.

Errant priests like Msgr. John Zenz, who was the power behind the throne here for 20 years, and his cronies in the chancery tried destroying us behind the scenes.

Initially, we thought this was just some local thing, and aimed only at us, but we couldn't figure out why. But then as our eyes opened wider, we saw this type of thing was commonplace throughout the Church.

So we started to dig and dig — and dig more. Little by little, priests and other faithful Catholics started coming to us quietly and teaching us the real state of affairs.

And there was one tracker we were always keeping an eye on: the numbers, the official headcount of all things Catholic, largely in the United States.

And those numbers do not lie; brother, do they ever not lie. And the only response to them is wow — just, wow. Look for yourselves. And these are the bishops' official numbers.

In 2005, 81 million Americans, according to various social survey and polls, identified as Catholic. Today, 76 million do — a drop of more than 5 million.

In 2005, 15.5 million former Catholics said they no longer considered themselves Catholic. Today, that number has skyrocketed to more than 26 million — an increase of more than 10 million souls.

Catholics who tell pollsters they attend Mass each week has dropped from 26% to 21%.

That was a number we paid special attention to when we first started this apostolate back in the day: what percentage of Catholics actually go to Mass each week.

It used to be one out of four, which is dismal enough. Now, it's even worse — only one out of five.

Additionally, for every new Catholic coming into the Church in 2005, five left. Today, that number is eight.

This is a Church in full-blown retreat. If these were numbers from any corporation in America, the entire board would have been fired years ago. And here is the frightening part: Today's most influential bishops and cardinals are all baby boomers.

They are in their 60s and 70s now and soon will be gone. The world they have left behind, both culturally and in the Church, is one devoid of almost all authentic spirituality.

Tens of millions of Catholics have walked away from the Church and been plowed under by the Culture of Death. And all of it has occurred on the watch of these bishops.

The children and grandchildren of the boomers are even less Catholic than they are, so much so in fact, that the actual raw numbers of Catholics in America is just a couple of years or so away from taking a nosedive.

No matter what metric you look at, or measure by, the result is something about to look like Berlin at the end of World War II — desolation and little else, the shell of a once-thriving city.

Catholic civilization has been sacrificed on the altar of popularity by a bunch of weak, cowardly and homosexual men who began overrunning the episcopate in the 1940s, owing to a Communist plan to destroy the Church.

Looking at the numbers, it's hard to argue about their success. And of course, all these numbers are quantitative, they speak nothing to the arguably more important qualitative aspects.

How many of those 21% who still go to Mass each week actually believe in the Real Presence?

How many go up and receive Holy Communion in a state of mortal sin, thus committing sacrilege?

How many reject various dogmas and doctrines of the Church but still count themselves somehow "Catholic"?

Those are the numbers no bishop ever seems to want to have any polling done about. And for once, you can't really blame them. The number of actual Catholics is considerably smaller than what the average Catholic believes.

In reality, it's not much higher than a few million Americans who love and believe in the Church, and it's going to get much smaller starting pretty soon.

The leadership has done one heckuva bang-up job; not to mention, they have set the table for their successors — talk about hell to pay. 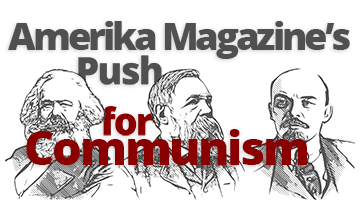 Amerika Magazine’s Push for Communism
From an order embracing heresy as a routine.