Year of the Devil?

2020 will be unlike any previous year.

An Italian exorcist is publicly warning that what he calls aggressive satanism is forecasting a collapse of society, and he's attributing it to the collapse of the family. Father Francois Dermine, a Dominican, is saying that children are being exposed to the demonic at younger and younger ages, and it's taking its toll.

While much of this has remained off the front pages, some of it is becoming more well known. For example, recent news about a publication titled A Children's Book of Demons has many people understandably concerned. It's marketed specifically for children 5–10 years old and presents a fun experience for little children, with bright and colorful images of roughly 20 devils, presenting them as kind of friendly cartoon characters.

The book is the work of an occultist and skilled illustrator, Aaron Leighton, who also uses the book as a means to teach children how to actually summon demons through the use of what's known as the sigil, a magical symbol.

Father Dermine says the book is further evidence of just how much things have deteriorated in a very short amount of time because, just a few years ago, almost no one would have imagined such a book would ever be thought of, much less produced and sold — and now a virtual slew of them are being produced, aimed again specifically at young children.

There's the Satanic Coloring Book, with its cover design of children happily coloring in a pentagram for its cover, which came out in October — but not before the August release, right on the hooves of the Children’s Book of Demons, of Baphomet and Friends: The Satanic Coloring Book. The lower part of the cover says: "Presenting Satan, Lucifer, Black Goat, Catlhulhu, Dracula, Cthulhu, the grim reaper, the Krampus, Witch and More!"

If you've been keeping track, that's a child's demon book released in quick succession in July, August and October. Parents should be deeply worried.

But, Fr. Dermine says, that's just the problem; not only are parents not worried, they aren't even engaged. With the continuing dissolution of the family, children have very few role models, he says. And that, combined with a plummeting interest in the Church by young people, and you have the two major ingredients for a huge upsurge in interest in the occult and the demonic.

The Church, owing to the massive weakness of its current leadership — not just in Rome but all over the West — is driving children away. Recent polling from Pew and others reveals an astonishing statistic: that it isn't just adults leaving the Church, but young children. A majority of people who leave when they reach adulthood told Pollster they actually stopped believing when they were 10–18 years old. Those ages and even younger — as we see from the coloring book explosion — are when children and teens become exposed to the satanic elements, usually through other friends in school.

Father Dermine says that exposure at these young ages creates what he calls a "satanist mentality," where the occult and the black arts just become normal. Whatever shock — if there ever was any — simply fades away and satanic rituals and witchcraft and so forth become completely accepted as no big deal, and even participated in as normal activity.

There is no doubt that all this demonic and occultism and witchcraft is getting ready to explode into the mainstream. At some point, a critical mass gets reached and the inevitable mainstreaming hits. With the U.S. presidential election coming next year, 2020 just might be the year it all comes into the open.

For example, this past October, 13,000 self-proclaimed witches cast what's called a "binding spell" on President Trump, hoping to knock his administration off track. In fact, witches and their activity have been multiplying since the very day Trump became president. In 2018, a large number of New York covens of witches hosted a spell-casting ritual against Supreme Court Justice Brett Kavanaugh.

As a point of reference, researchers have found that witchcraft has been increasing since the 1990s. Then there were an estimated 8,000 wiccans in the United States. Ten years later, in 2008, their ranks had grown to 340,000 and five years ago, in 2014, Pew Research pegged their number at 1.5 million — almost half a percent of the entire U.S. population (and remember, that was five years ago).

In these intervening five years, we've witnessed a number of Black Masses gaining considerable attention, social media sites selling what they at least claim are consecrated Hosts for desecration, and God only knows how many more witches and self-professed pagans — likely millions. All the signs indicate that conditions are ripe for a titanic clash between good and evil, in the Church and in the culture at large. The storm clouds have been gathering for a long time now, and perhaps most disturbing is the association of all this evil with children.

Sixty million killed through abortion, millions more with no stable family, no moral role models — and now an exploding satanic culture poised to emerge from the shadows and go mainstream.

This coming year's election may be the focal point, the center of a storm, but it is absolutely certain that what will be swirling around it, the driving winds of the storm, will be an intense spiritual war. 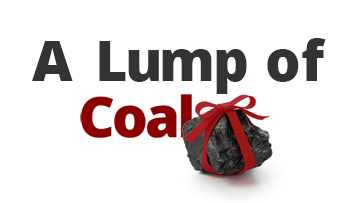 A Lump of Coal
Sitting in the archbishop's stocking.