Yes — It Is Their Fault

Who else's fault would it be?

As a reminder, please join us in our 54-day Rosary Novena in the run-up to the election. And also, remember to get your 2020 Catholic Voter's Guide. It's getting really heated in the Catholic corner of the political world these days.

And that corner — for the record — may prove to be the most important corner, given how polarized voters are and the very narrow margin many of the polls are showing. Various clergy are striking out about the immorality of voting for Democrats.

Father James Altman got the ball rolling with the release of his video saying voting Democrat is a mortal sin. And for the record, yes — it is. But boy oh boy. That brought out all the soy-boy, gay-friendly, emasculated, effeminate clergy who can't stand anything threatening the little sissy empire they've fashioned for decades.

Of course, James Martin took the bait and has been palpitating on social media ever since (along with other sodomy-supporting priests who are all in for the Democrats despite their support of child murder). The gay clergy is really in quite the sticky wicket here.

In order to keep embracing their love of man-on-man sex (what they share in common with Democratic leaders and love more than anything else), they need to keep talking about other issues besides child-killing and pretend those issues are more important.

So climate change ascribed to man — which isn't even proven — has taken on an importance way beyond what it deserves. It's the same reason all the gay clergy in the Vatican never stop going on about the weather while saying painfully little about children sucked out of the womb after being hacked to shreds.

But how did we get here? Whose fault is it? We know you'll be shocked here, but it's the bishops' fault — and, what's more, on a number of levels.

Some are gay; some cover up gay sex abuse by their priests, most of them lie about it all and the overwhelming majority are all in on the evil. See, for decades they made sure only emasculated men either got in to seminary or moved on to get ordained.

The good men got bounced. The losers were accepted and ordained.

Sissy clergy are all part of the sissy empire they've constructed — all in an effort to protect homosexuality within their ranks. Just like their Marxist counterparts did in the culture, brainwashing generations of college students year by year, the bishops did the same with young men applying for the priesthood.

The good men got bounced. The losers were accepted and ordained. Sure, a few slipped through — just like some smart kids get through the Marxist indoctrination at college, but most are mowed down. Little by little, the bad guys get the numbers on their side — tipping the scales each year with the latest group until, at last, the scales are completely tipped.

Then when a priest like Fr. Altman gets past the orthodoxy sensors and then comes out swinging, the ladies in the priesthood lose their minds. They hate truth. They hate the Faith. They hate even themselves, which is why they are so filled with hatred that spills over into every facet of their lives.

The goal is obvious — the destruction of the world as we know it. The goal is the replacement of the established order with a chaos that allows for a select few to climb the heights of power. Well, that's what's been going on in the Church for decades as well.

A select few (mostly girly men clerics who are working out their own psychological disturbances) spiritually abuse anyone they need to to create the self-delusion that they are normal.

They bear absolutely zero resemblance to Christ. They are not fathers in any legitimate sense. They are destroyers, plain and simple. And now, true or not, they believe their moment has arrived against the backdrop of an election proving more and more every day to be a gigantic spiritual war.

They are not fathers in any legitimate sense. They are destroyers, plain and simple.

That's why priests like Fr. Altman need to be attacked by the clerical queens; it's why organizations like "Catholics for Biden" have to pop up — as a great final push (at least they believe it's a final push) to finally kill off any authentic Catholicism in the public square.

Facing the music, we have to admit that they are this close to actually grabbing hold of the brass ring. This. Close. And yes, you have the bishops to thank for this entire drama. And frankly, who else would be responsible? All the power and authority in the Church reside in them. Who else would be to blame?

Many of them engineered this outcome. Others knowingly went along with it. Still others were and are too stupid to know what they are looking at. That won't get them off the hook at their judgments though. They hear what James Martin says and tweets and posts every day. The head gay cheerleader never stops.

So the very fact that he's allowed to go on means he has the "right" bishops in his corner. It took some cajoling behind the scenes from Church Militant with Bp. Stika of Knoxville — and it went on for a couple of years — but at least he finally went on the public record and denounced James Martin's evil.

And of course, Bp. Joseph Strickland of Tyler, Texas took the brave step this past week of publicly supporting Fr. Altman and his condemnation of voting for candidates who vote for child murder.

Is there anyone else out there who still thinks this isn't a giant spiritual war? And any reckoning of that war that ignores the reality that many of the clergy and bishops are on the wrong side, that is a fatal error.

It's their fault. And there is no escaping that reality. 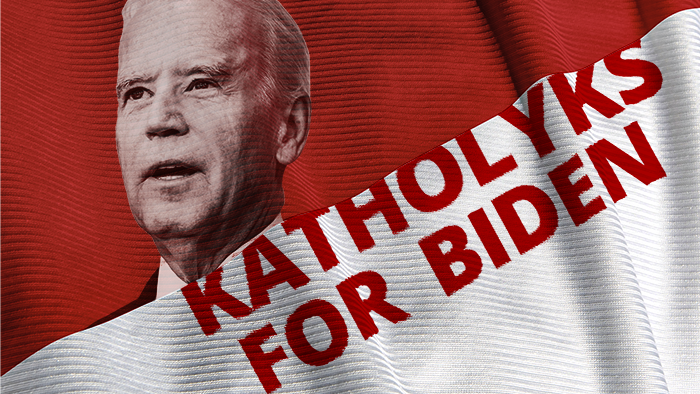 Katholyks for Biden
Marxists — not Catholics.